Last week, Microsoft revealed key details about Project Scorpio, the next console in its Xbox One family, which will launch later this year. Microsoft says that Scorpio will be "the most powerful console ever", and a glimpse through the specs that it's discussed so far offers a clear indication of the company's gaming ambitions, promising six teraflops of power, and monstrous, cutting-edge performance.

There's still plenty that we don't yet know about Scorpio - including what it will look like when it eventually goes on sale. But today, we got our first look at the Scorpio Dev Kit, which features similar hardware to the actual console, to enable developers to create a new wave of more powerful gaming experiences in time for its launch. 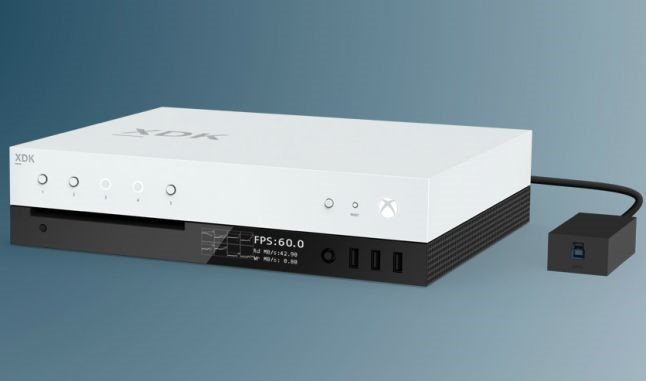 At first glance, the dev kit - which sports XDK (Xbox Development Kit) markings - looks rather like an Xbox One S that's put on a few pounds. The final product may well look completely different when it launches, but the overall design of the dev kit is similar to the current console, with a white upper body and a black lower portion, although there are some key differences.

The disc tray is located in the black section of the machine, which features additional back and side vents, to allow developers to stack dev kits on top of each other. Kevin Gammill, group program manager for the Xbox Core Platform, told Gamasutra: "I kid you not, I go to first-party studios, I go to third-party studios, and they have dev kits stacked. But they basically built blocks, or used Legos, as a gap so they could vent. Well now you can stack these ten-high."

There are more obvious additions too, the most noticeable of which is the OLED panel on the front of the console, which includes its own navigation button. This tiny screen displays useful information during testing, such as frames-per-second readouts. Above the disc tray, there are also five buttons that you won't find on an Xbox One S, which can be programmed to adjust the information shown on the OLED display during testing.

The dev kit has the same range of ports as Scorpio, along with three extra USB ports on the front, and an additional network interface card for transmitting debug information while testing multiplayer games. But Microsoft has equipped the dev kit with some more powerful hardware than the retail Scorpio console will get. The GPU on the dev kit has 44 CUs, rather than 40 on the 'standard' console; 24GB of GDDR5 RAM, compared with 12GB; and a 1TB solid state drive, instead of a 1TB hard drive. 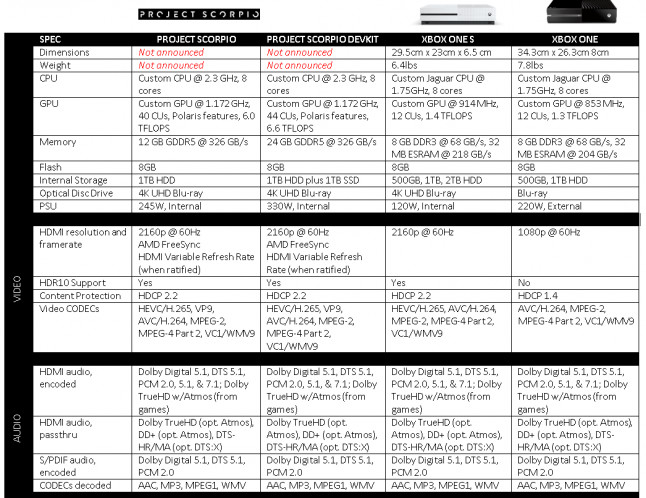 It's also providing developers with a high-speed cable that can transfer around 100GB of data in four minutes. Mike Rayner, technical director at Gears of War 4 developer The Coalition, said that the new cable means that they can push builds for testing "6 to 7 times" faster than before.

As with the Xbox One and One S, Scorpio retail units will be easily convertible into dev kits. But until Scorpio actually goes on sale, Microsoft's dev kit remains the only option available to those developers planning to build for the mighty new machine. For now, at least, only first-party studios, or third-party and ID@Xbox indie developers, will be able to get their hands on it.

Microsoft is expected to reveal more details about Scorpio this summer, most likely at the E3 gaming expo in June. An exact launch date hasn't yet been announced, but Microsoft has said it will be available in time for the 2017 holiday season.