This past year saw Microsoft capture some momentum from Sony's surging Playstation 4 in the console sales race. Through price cuts, bundling and big discounts the Xbox One rallied late in 2014 to top several monthly sales charts in the Unites States. However, Microsoft's latest Q3 reports for its Gaming and Computer Hardware division show a slowing trend for the Xbox consoles.

The Xbox One and Xbox 360 consoles sold a combined 1.6 million units, with revenue down $306 million (24%) compared to the company's Q3 console sales results of the previous year. The noticeable drop in revenue can be partially attributed to a lower price point for the Xbox One compared to the same time period last year, but the overall shipped Xbox consoles also dropped 20%. 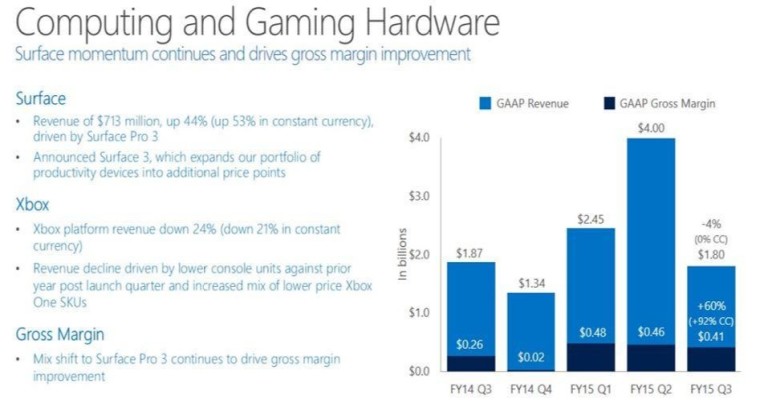 The news of slower console sales might be a sad note for Microsoft, but the company does have something to celebrate. First-party game sales jumped 49% in Q3, lead by the strong performance of Microsoft's recently-acquired Minecraft. In addition to game sales, Xbox Live revenues also increased $144 million (32%) compared to last year.

Phil Spencer spoke of a big first-party games presence for Xbox One at this year's E3 event in June, which likely will be the key for Microsoft's rally to catch the PS4 in sales and bring forth greater revenues in the future.