YouTube is today rolling out a new-look screen which displays at the end of every video, showing related videos and further interactions including the ability to "like" and "share" the just-watched clip.

Capping off one of the biggest re-design periods in YouTube's history, the YouTube team have reportedly begun the roll-out of a refreshed splash screen -- which has remained largely unchanged for some time -- that features the ability to interact further with the video, bringing it up to scratch with the rest of the new-look site.

The previous iteration of the screen showed less information and didn't allow users to "like" videos, although the ability to comment and share the video (e.g. embed codes) were shown.

While it's not showing on all videos just yet, and an official announcement is still pending, select videos across YouTube when visited are now displaying the new screen (there's a screenshot of the screen below).

The past three months have been extremely hectic for the YouTube team. They've rolled out a new mobile site, launched the beta of YouTube Leanback, made the video pages cleaner and simpler, launched a new "Playlist Bar", support for local music listings, upgraded support for annotations, a new video manager and promotional badges, new embed codes, and support for Google Buzz. 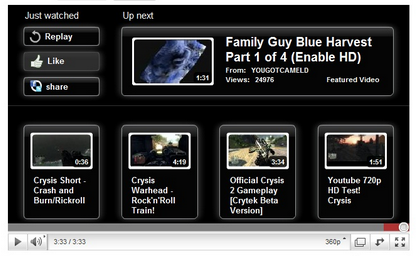 YouTube's new 'end of video' screen (Credit: The Next Web)