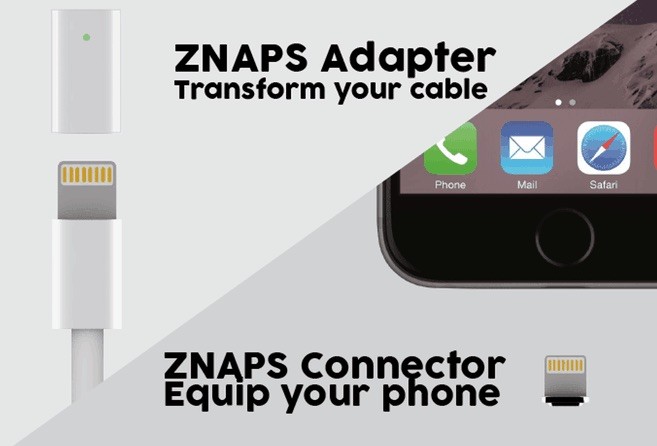 Since 2006, Apple's laptops have utilized a proprietary charging system dubbed MagSafe. The magnetic charging port is unique in that it connects magnetically and if yanked unintentionally it can unfasten itself without damaging the port or the laptop. Utilizing similar technology, Znaps is introducing a new magnetic adapter that will convert your current Lightning or microUSB port into a magnetic charging port.

Znaps system is fairly simple and inexpensive. For the base price of $9 USD, you will get one Znaps connector and one adapter. The connector will plug into your Lightning or microUSB port. The adapter will connect to your existing charger and it will allow you to connect magnetically to the Znaps adapter. It's that simple.

While this isn't the first time seeing a magnetic charger for smaller devices, Znaps was designed to be minimalistic and work with a majority of cases. The plug also has a silicone base that prevents dust or water from entering the charging port. Lastly, the Znaps system can also support transfer of data.

Znaps are currently running a campaign on Kickstarter that is scheduled to end in 29 days. The base price for one Znaps is $9 USD and there is an option to purchase more. The shipment date is scheduled for the end of the year.