You may not have heard of Anker before, but the company has been around for years, offering different kinds of charging solutions like power banks and AC adapters. The firm has also expanded into other product categories like flashlights, Bluetooth speakers, and projectors. The last one might come as a bit of a surprise but Anker has produced two so far under its Nebula brand. The Nebula Capsule is the most portable model the company offers and combines a portable projector with a 360-degree speaker. 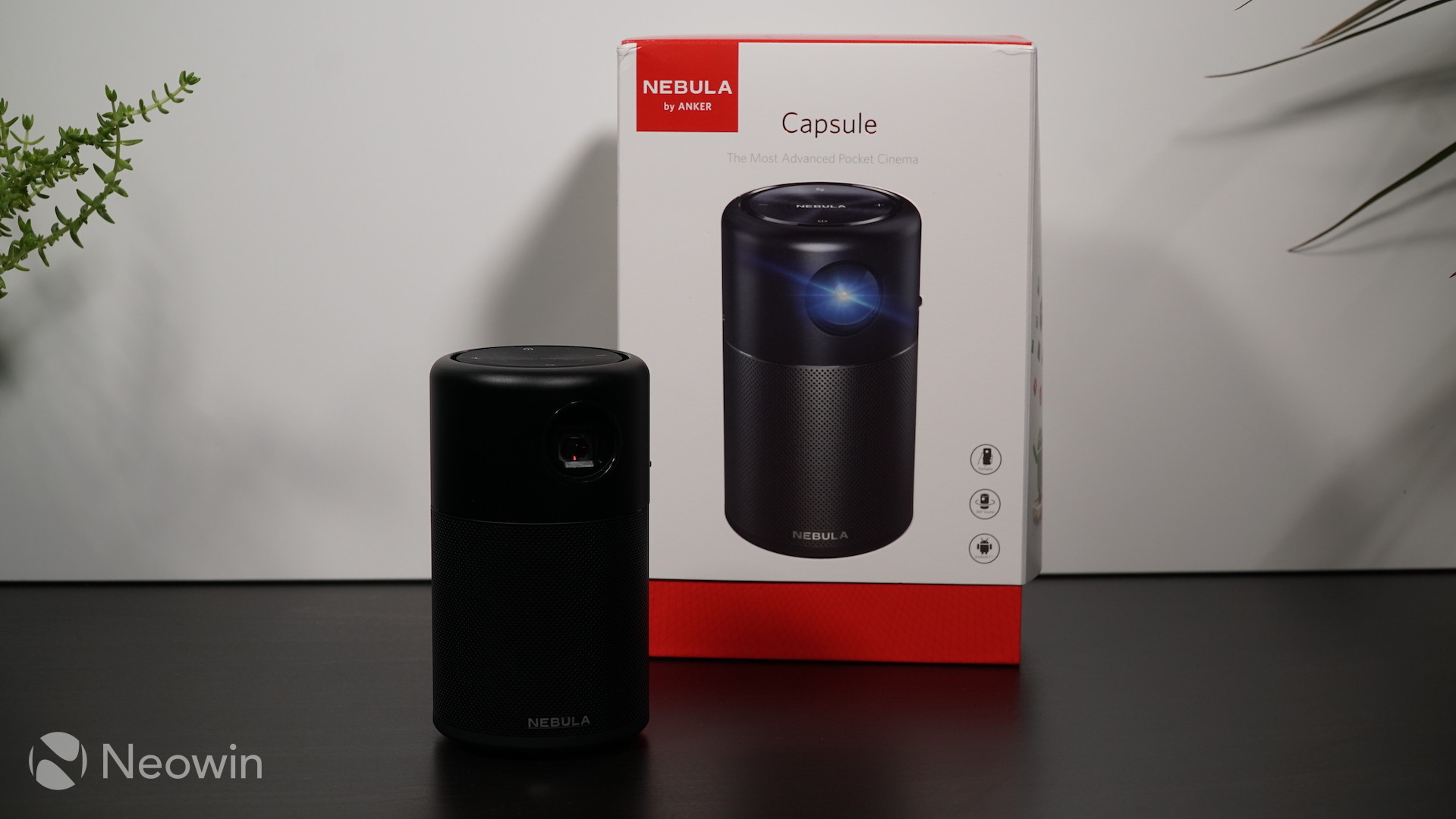 The Nebula Capsule is quite compact, measuring in a little under five inches in height and around two and a half inches in diameter. If that's hard to envision, think of a 12-ounce soda can and you get a rough idea of its shape. The exterior looks quite simple and is made mostly of metal, with exception to the top control panel and base which is made of plastic. 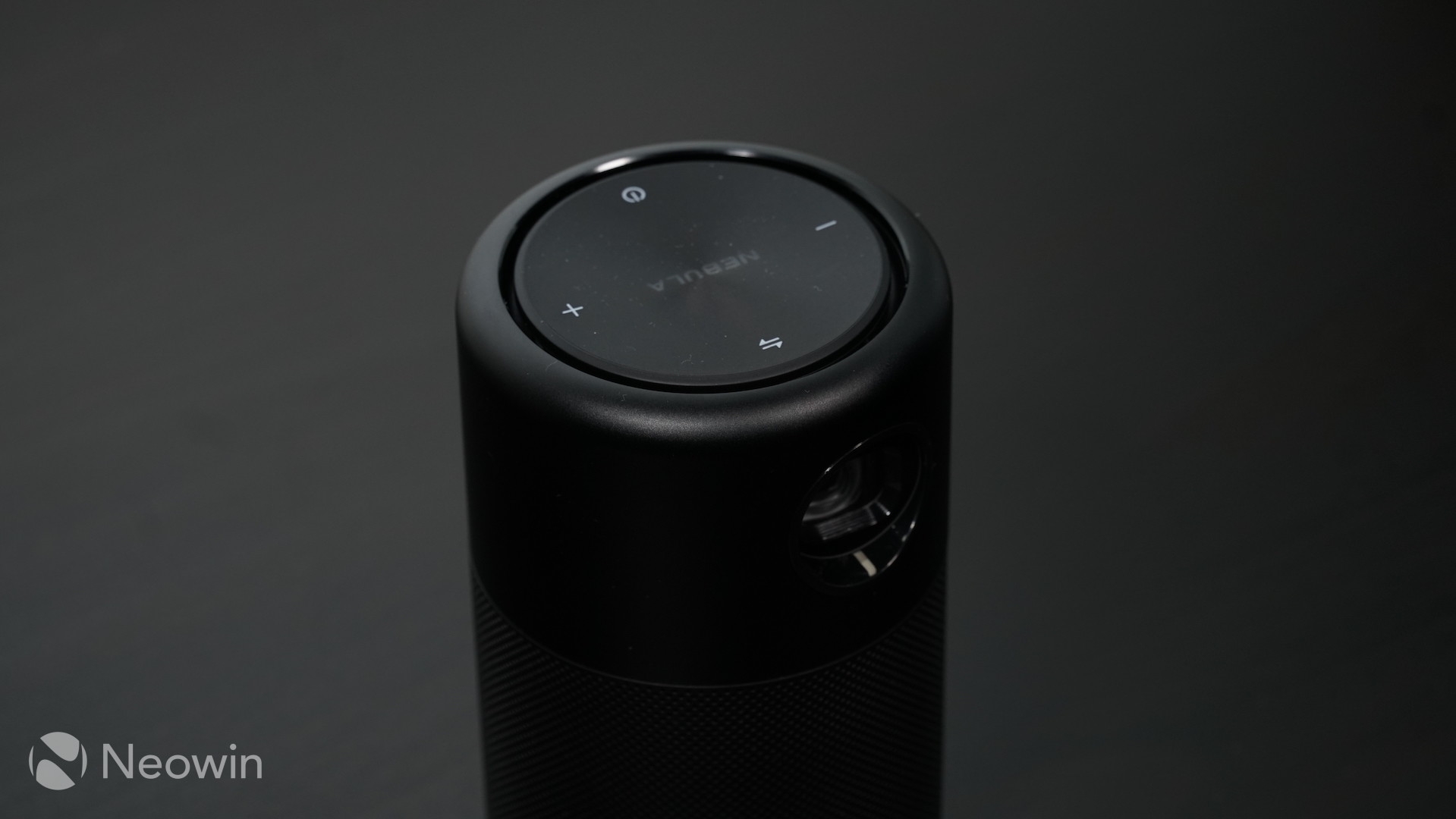 The device can be divided into two sections, with the top housing the projector lens, controls, manual focus dial, IR blaster port, and ventilation grill for the internal fan. The bottom houses the speakers, and also has ports for a full-sized HDMI, micro USB, and 1/4 inch opening for use on a stand or a tripod. Those that prefer to use physical media will notice that the unit does not have an SD or micro SD slot. This is a bit of a bummer but the micro USB port does support input and Anker has included a USB OTG cable. 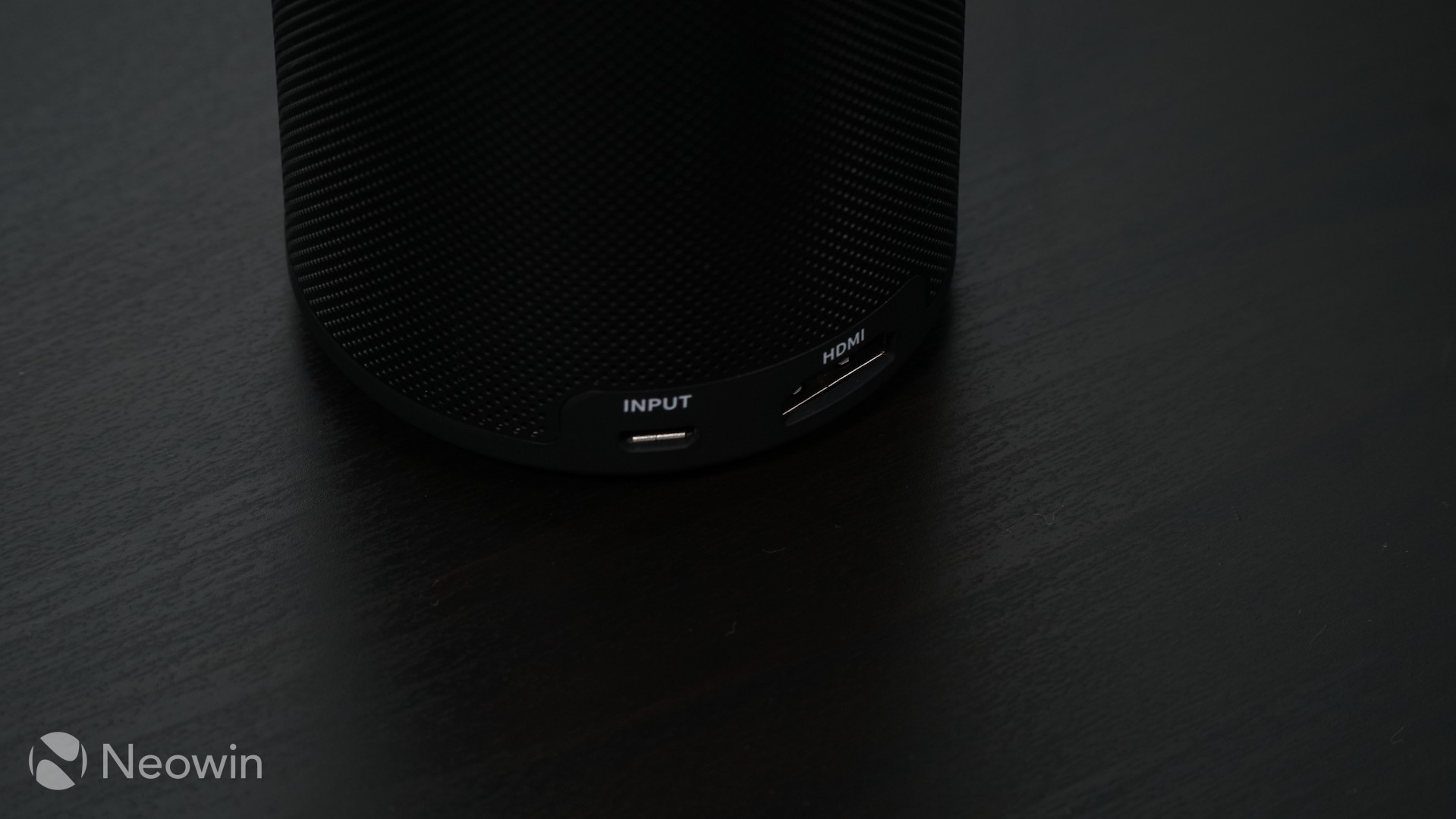 Overall, it feels solid in hand and seems like it will be able to take some abuse. Also, the design is very subtle and understated so it should easily blend into a room. If there is one thing to gripe about, it would be the absence of a lens cover. This is meant to be a portable device and, while it does come with a mesh case, proper lens protection for the unit would have been ideal. 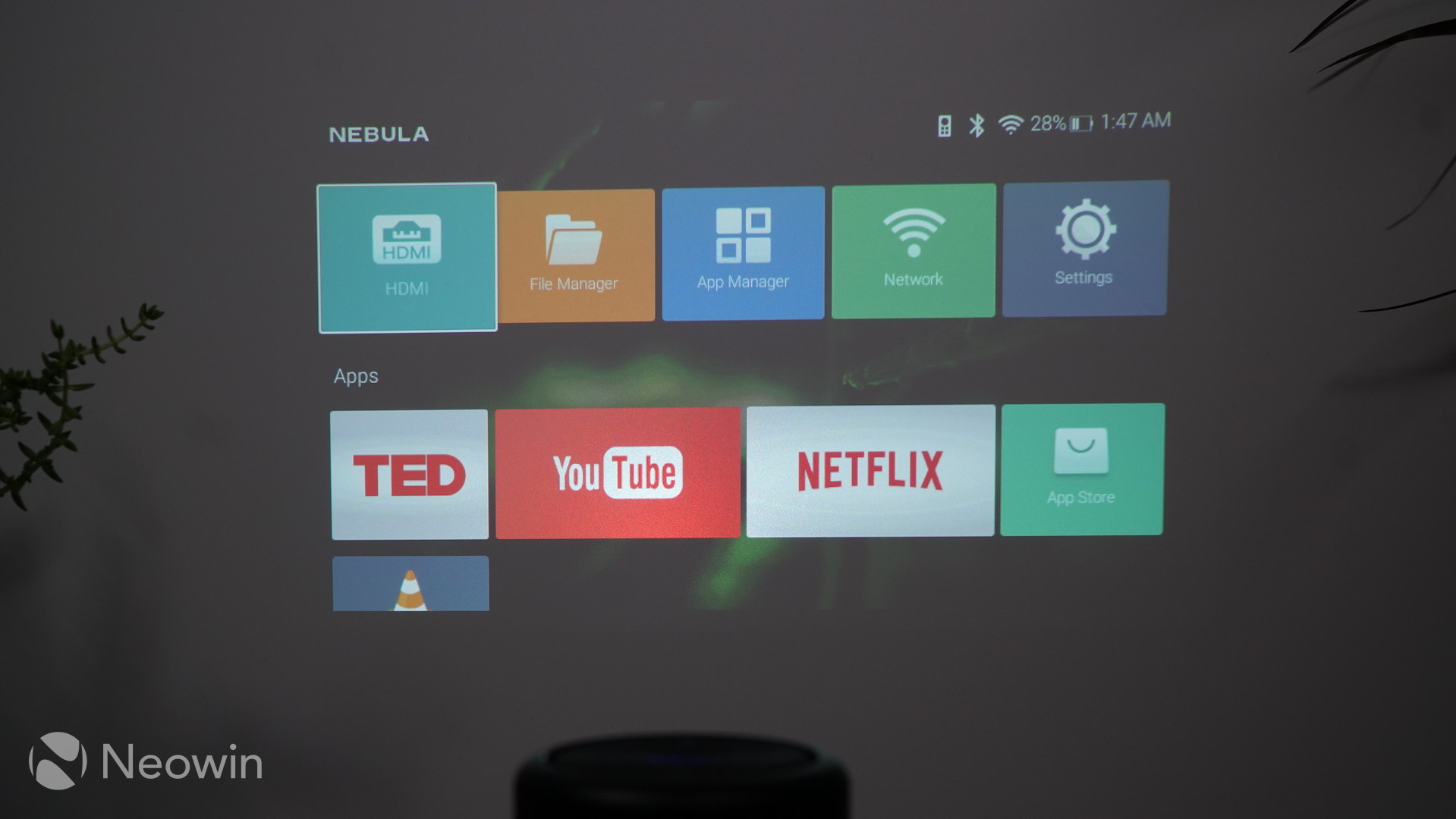 The Nebula Capsule runs a custom version of Android called Aptoide TV that is based on Android 7.1. Aptoide TV does not utilize Google's Play Store but instead relies on the Aptoide Store. The app counts might not be anywhere near what Google offers, but doing a quick scan of things, it does have quite a bit to offer. 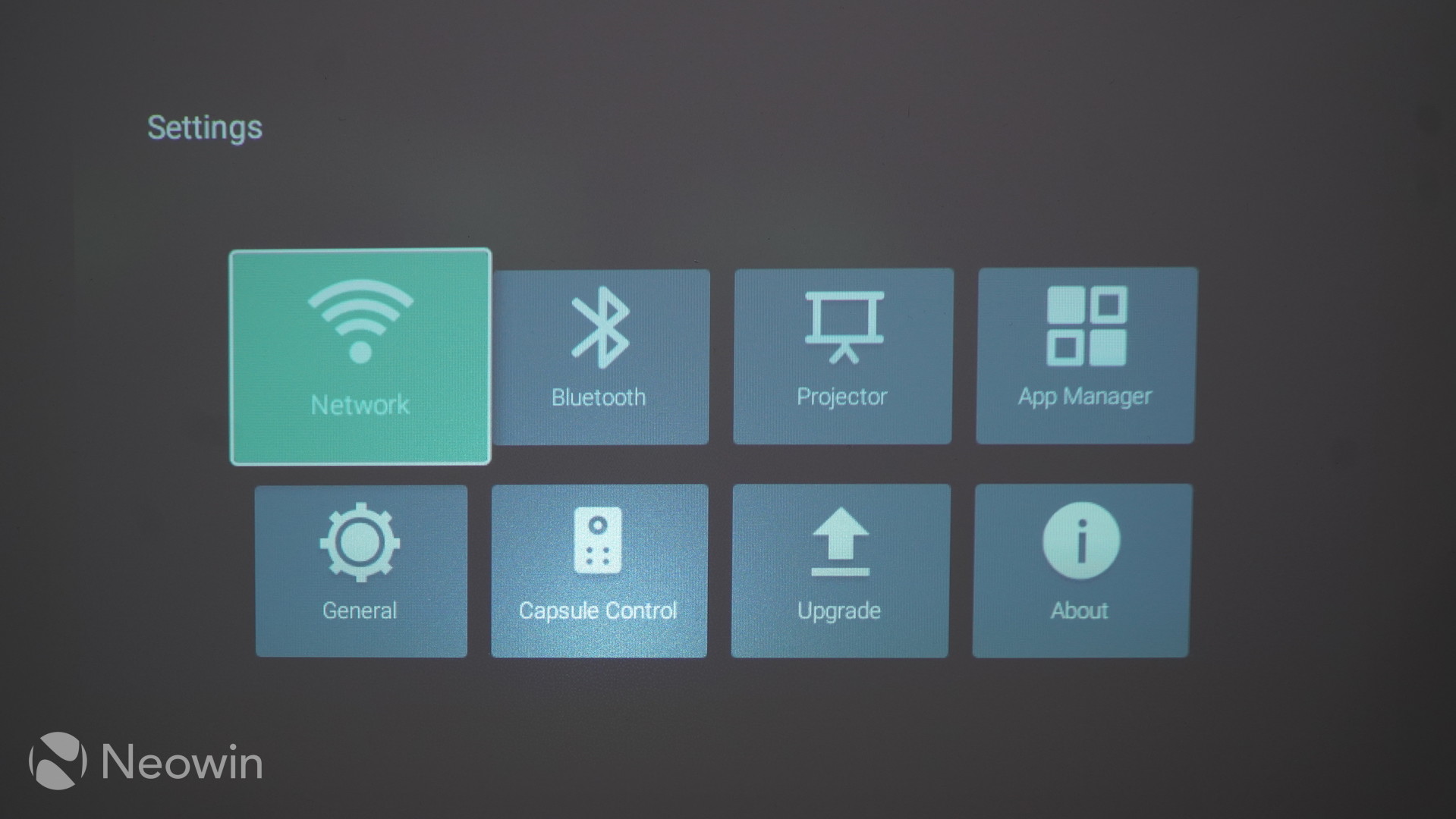 Everyone is different when it comes to apps that they will utilize, but for my use, the Aptoide Store had everything that I would need. By default, the projector comes with Netflix, YouTube, and TED installed - only requiring that I download and install VLC. The app store isn't limited to just media and you can also download your favorite music apps like Spotify and Pandora, along with social apps like Facebook, Skype, and Messenger. 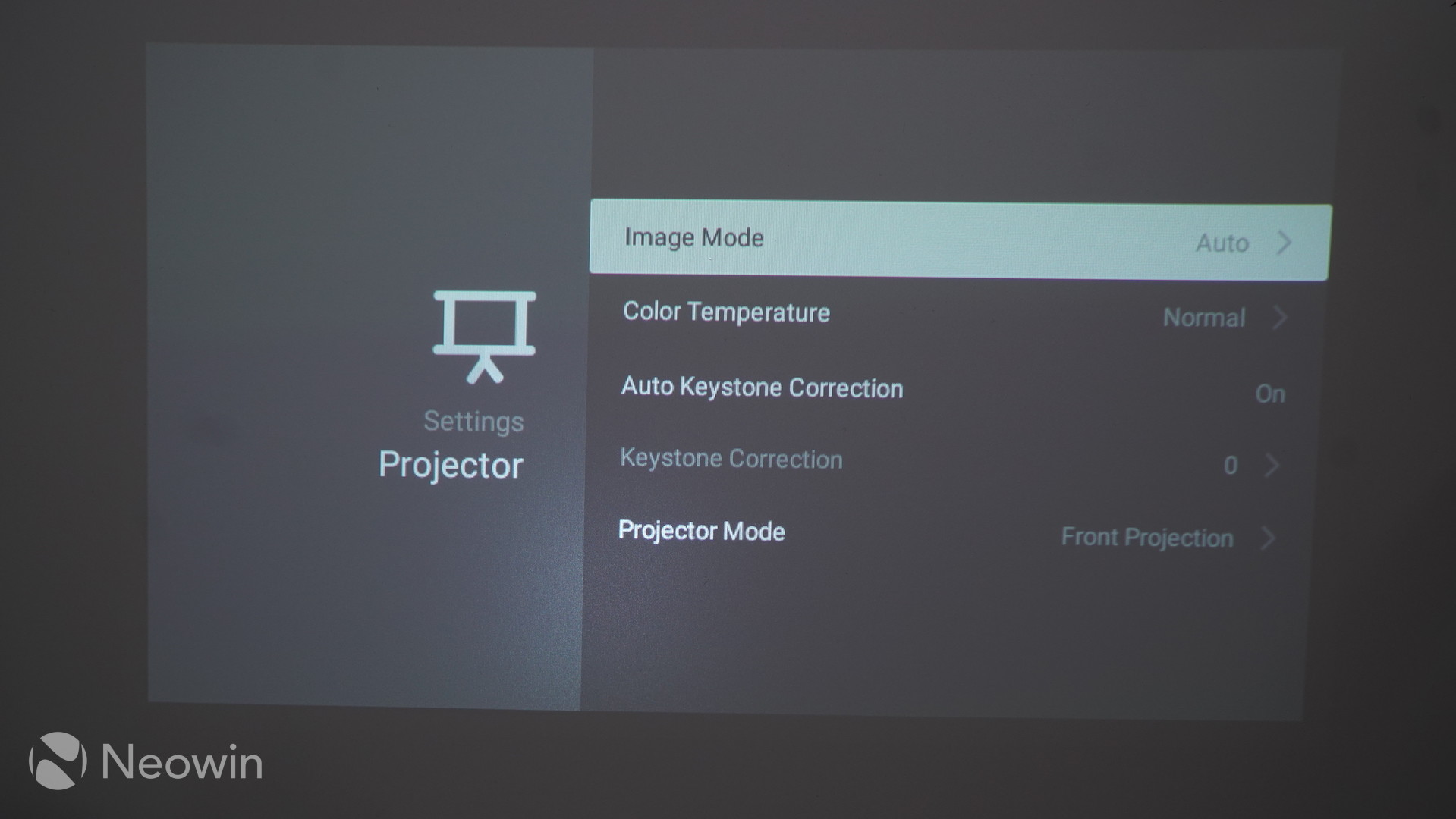 As far as the interface goes, it's quite simple and easy to navigate. When you boot up the projector, it takes about 35 seconds, after which, you will arrive on the home screen. You will be able to choose from a variety of different options like switching the source to HDMI, navigating to File Manager, App Manager, Network, and Settings. These aforementioned items will be displayed towards the top of the interface and will always be present. Below these items, you will find the native apps that come with the unit and also apps that you download. 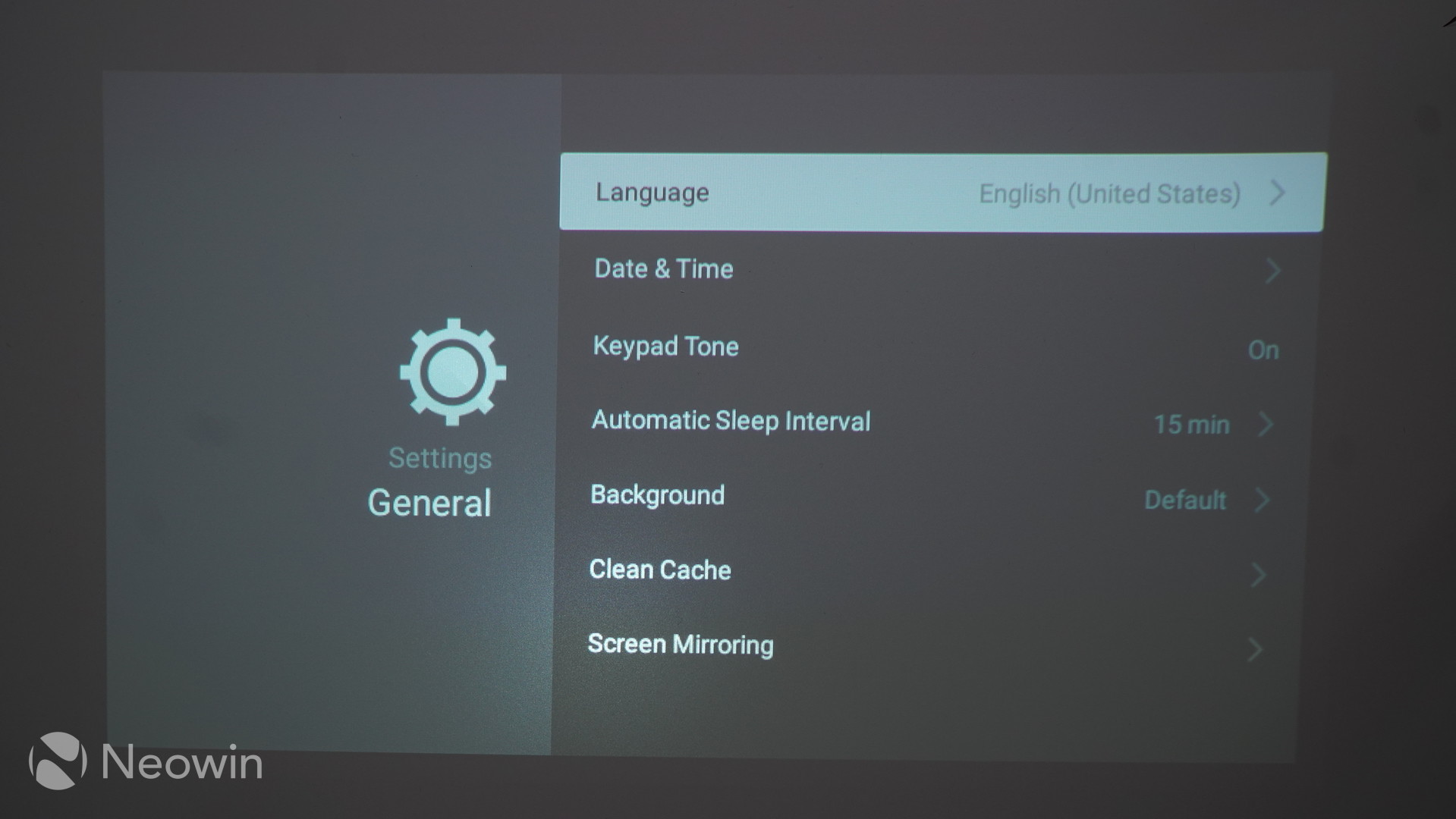 As you might expect, there are standard options in the settings menu that will let you set the language, date, and more. You can also enter the network settings to connect the device to a wireless network. Perhaps one of the more important areas is the ability to adjust the image mode of the projector, along with the color temperature, as well as keystone correction. Despite being small, the projector does have some nifty settings when it comes to projection options, allowing for front, rear, inverted front, and also inverted rear projection. 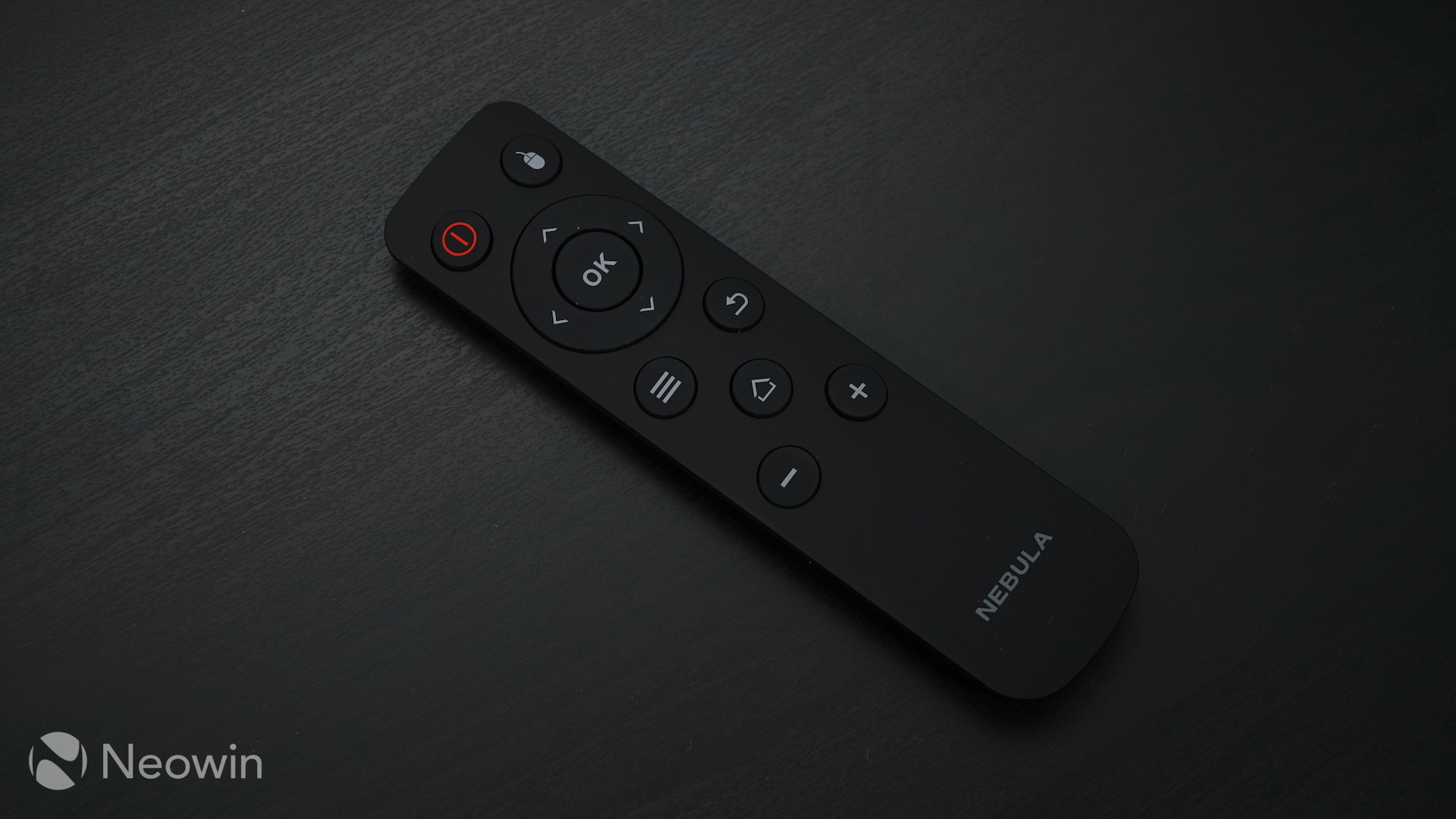 You can use either the physical remote that is included with the device or you can download the smartphone app. While the physical remote is okay, it needs direct line of sight with the IR blaster located on the rear of the projector and it also does not illuminate when using it in the dark. The Capsule Control app alleviates these issues by being available on your phone. This app can be downloaded from the Google Play Store and Apple's App Store. 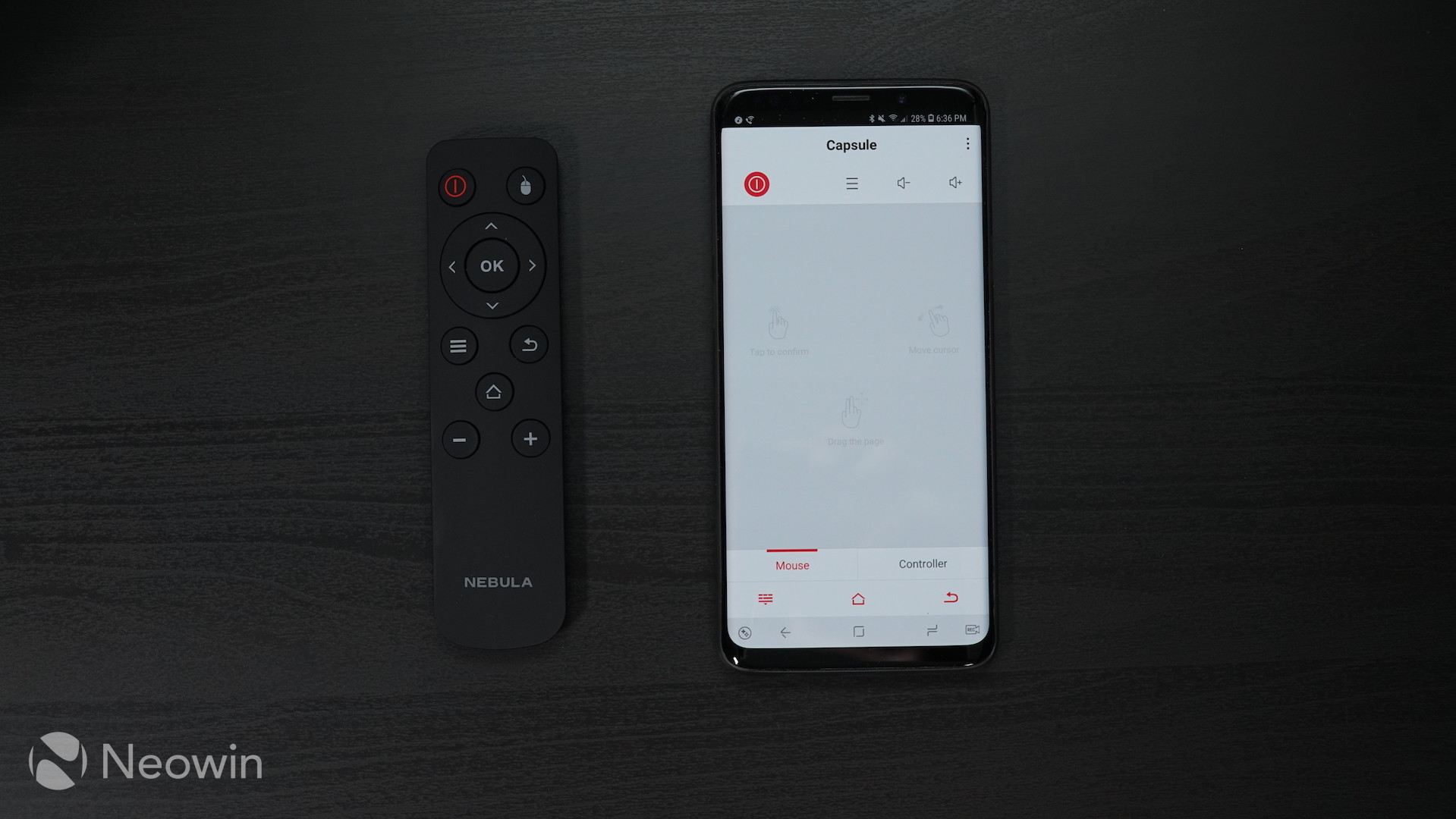 For the purpose of this review, the app was installed on an Android handset. What I found odd was that despite this being a retail product, the app is still apparently in beta. Also, in order to sync with your projector, the app requests access to your location data, which I found kind of strange. Luckily, once you set up the app, it no longer requires this information, so you can revoke location access from your handset's settings menu. When the app is opened for the first time, it will show you what projectors are available for pairing. 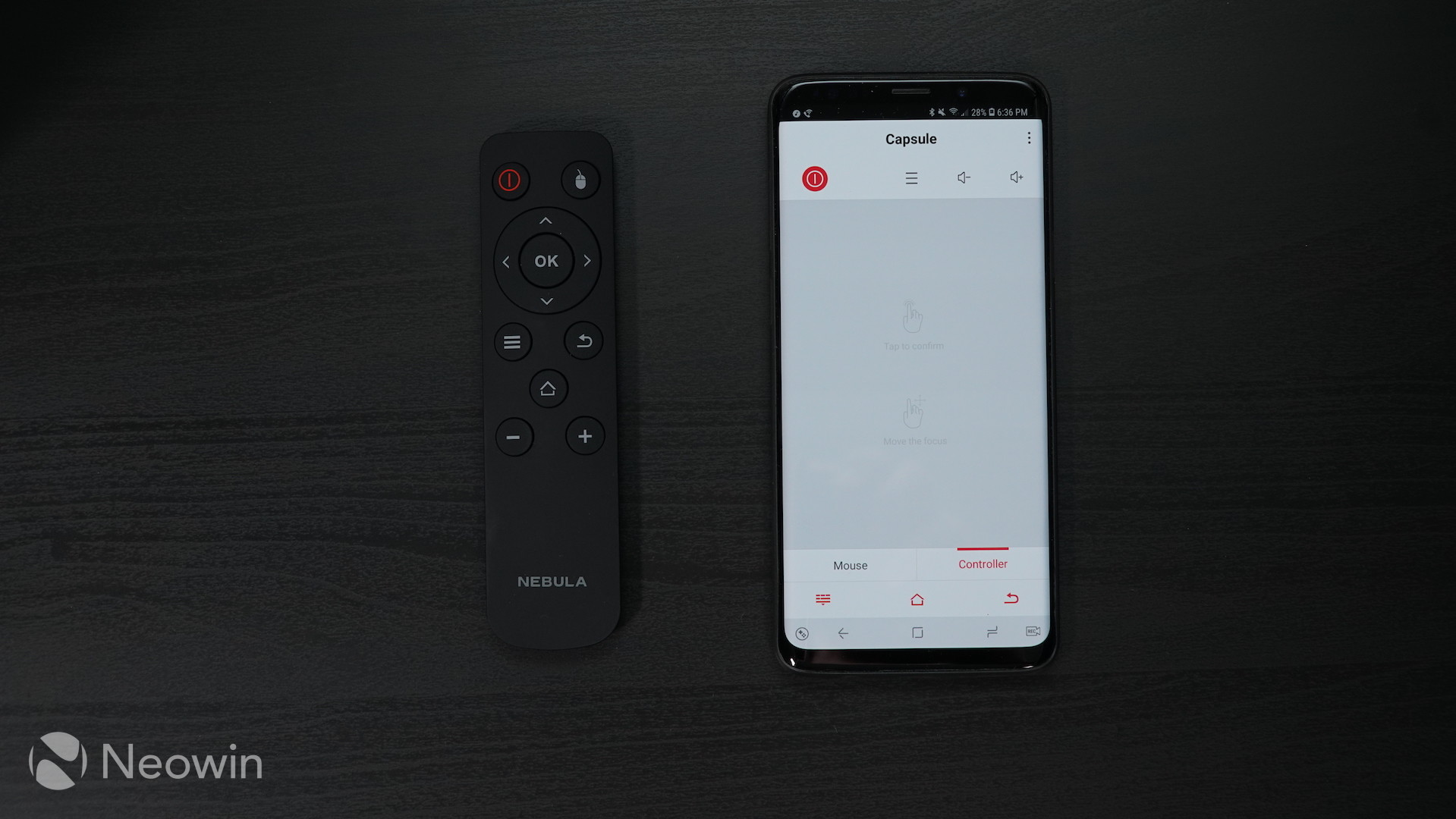 When paired, you will receive a brief tutorial of the app, showing that you can use it in "mouse" mode, which lets you use your screen like a touchpad, allowing you to control a mouse cursor on the screen. Otherwise, you can opt for "controller mode" which gives you basic control movements by using the screen of your phone, but only allowing movements in the x and y-axis. With the app, you will also be able to control the volume, have access to the menu, home, and back buttons, and use a full keyboard to type into search fields. There is also a power button that can shut down the projector but it cannot turn it back on from the app. 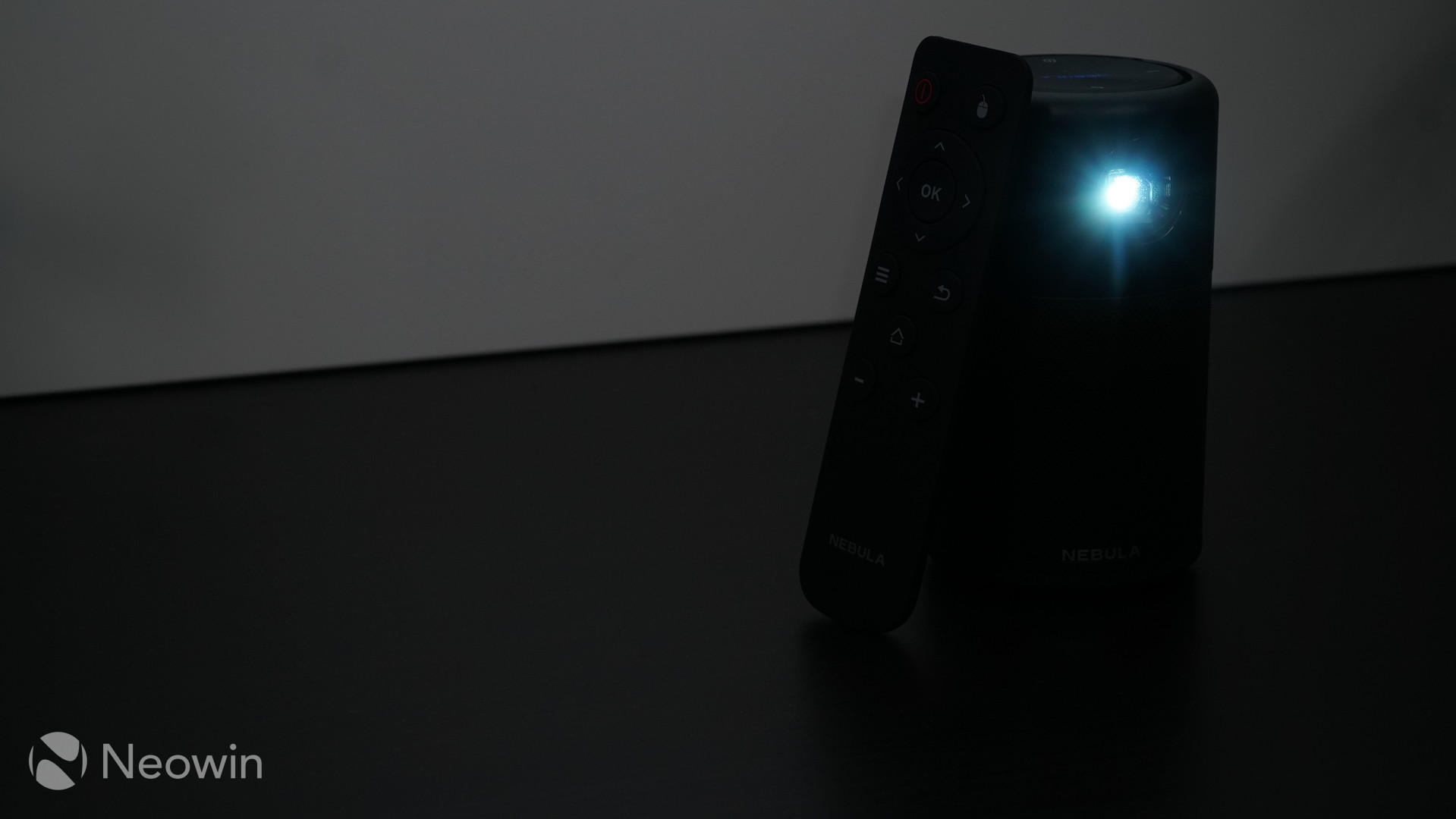 The Nebula Capsule offers a resolution of 854x480 and projects at 100 lumens. Yeah, that's it. That means that you won't be having movie parties on the beach until sundown and you won't be giving presentations inside an illuminated conference room. While you can see the projection in a brightly lit area, it is very dim and probably won't be to your liking. But, in a dark area, the projection is fine, although, the quality leaves much to be desired.

Perhaps one thing that is a huge plus for this unit is that it offers keystone correction. That means that it if you aren't projecting to your source from an adjacent level surface, you normally would get an image that is distorted. Because you have the ability to adjust the keystone on the vertical axis by plus or minus 40 degrees, this problem can be alleviated. The lamp life is rated for 30,000 hours, so it should provide plenty of playback time. 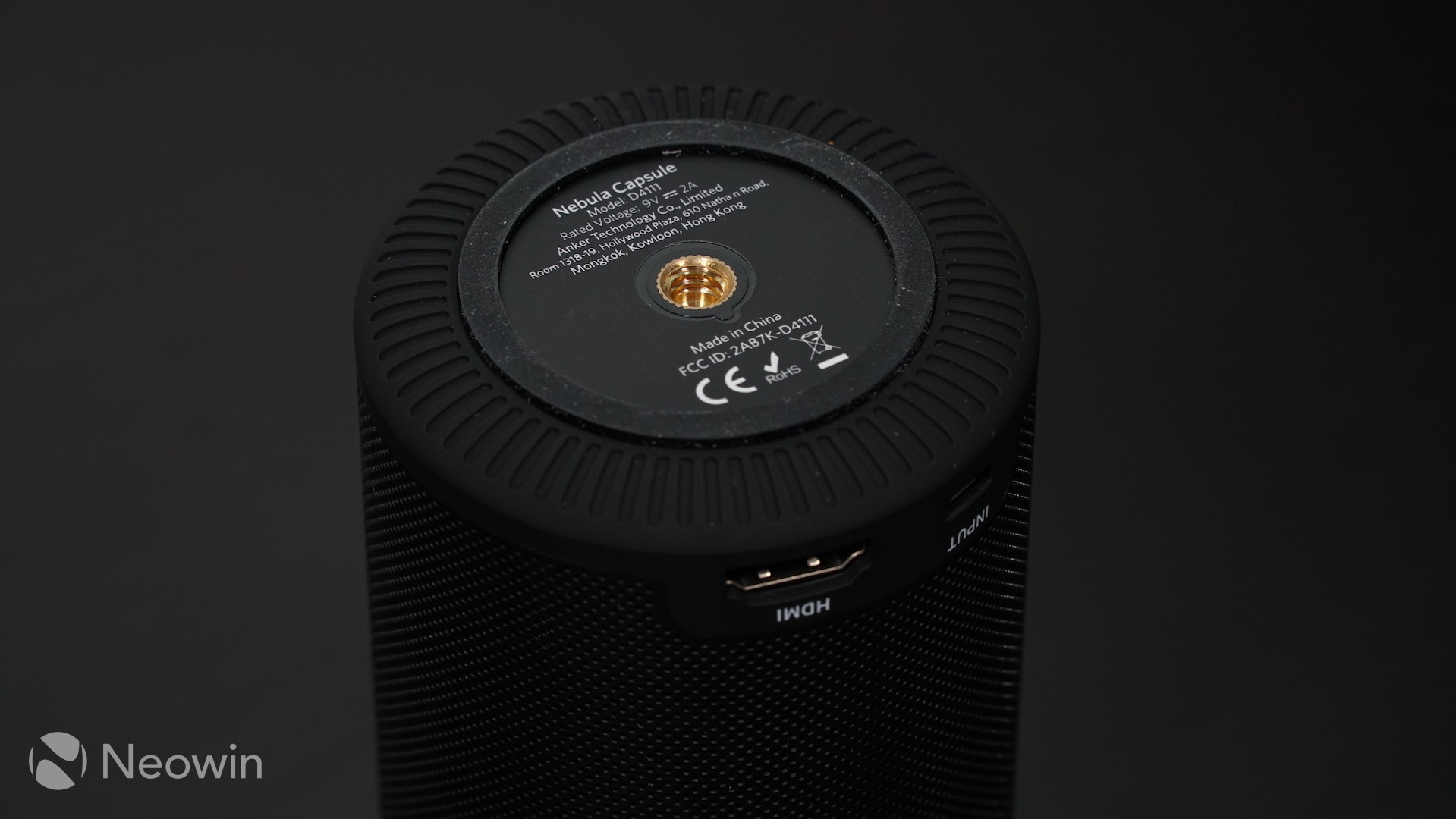 Although it is being touted as a projector, the Nebula Capsule is also a 360-degree speaker. Pumping out around 75 decibels at its peak, it's more than loud enough in a small to medium sized room and remains clear no matter what the volume.

If there is a negative, it is that it does not sound all that robust, in fact, it sounds quite hollow. There is bass being emitted, but you just don't get that depth from the mids. This comes as a bit of disappointment considering that Anker makes several different portable speakers. I have never experienced the company's dedicated speakers, but you would think that it would have mastered this area by now, but unfortunately, not. Maybe it's the result of packing too much into a small package. 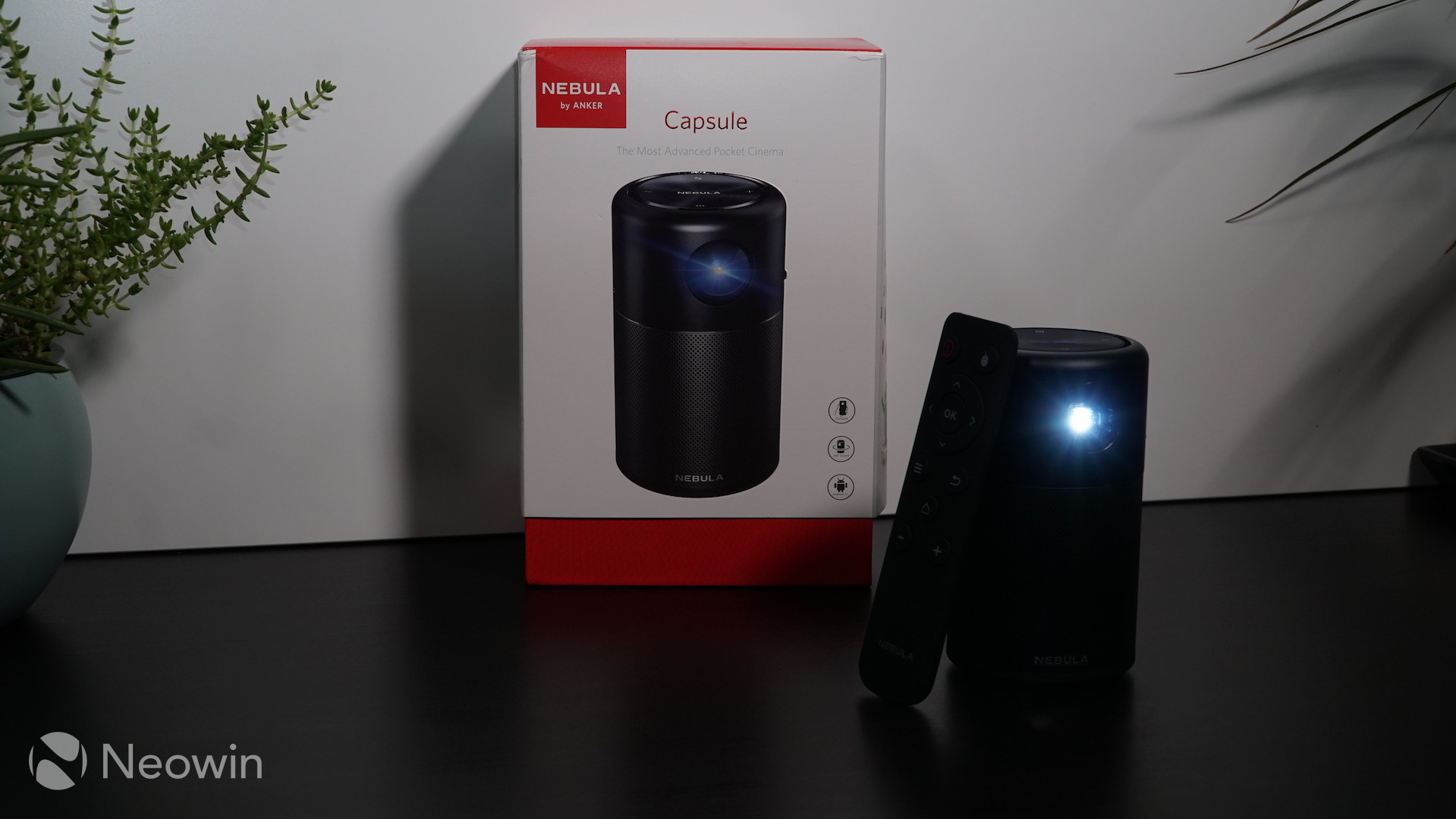 The battery is probably one of the more crucial components of the portable projector. Anker has squeezed in a 5,200mAh battery, which the firm states will last up to four hours when projecting and up to 30 hours when just used as a Bluetooth speaker. Luckily, the device actually exceeds this value when it came to projecting, clocking in five hours on the dot. This is quite good, considering that most movies are around two hours.

Using the bundled charger which has an output range of DC 3.6-6V at 3A, 6-9V at 2A, and 9-12V at 1.5A, it can charge the unit from zero to 100 percent in three hours. This isn't too bad, but you'll probably want to keep this thing plugged in if you are expecting to use it on a whim, as it is not that quick to charge. If you plan to use it for an extended amount of time while out, you can also bring a portable battery pack, and it will also charge up the unit without any issues.

As far as quality goes, the exterior is quite solid and although the resolution of the projector isn't all that great, it works. The sound isn't as robust and full as you would expect it to be but is still plenty loud and can easily fill a small to a medium-sized room.

While it doesn't do either of the things its supposed to extremely well, it does allow you to get by and its major selling point is that it is portable. It isn't something that I think most will use daily but it is a device that can come in handy when you are on the go or just want to have a bit of impromptu fun. I think the biggest problem here is what it offers for its price.

When you are selling a product like this, it's to a very specific audience. Projectors used to be a go-to solution when you wanted to put things up on a big screen. To an extent, they still are in the right environment. But now, the world has changed and there are plenty of homes and offices with large TVs and even monitors. It isn't that difficult to cast your smartphone, tablet or even laptop screen using a device that costs a fraction of the price of the Nebula Capsule.

Now, these are blatantly different kinds of products, but the Capsule is competing with many different types of products, doesn't really cater to a huge demographic, and it costs quite a bit at $349. If you are willing to accept the video and sound quality, for the sake of portability, the Anker Capsule Nebula is a good option but may end up being one of those products you want to experience out of curiosity but never really actually own.