The Choetech Iron is a Qi stand that employs 3 inductive coils to give maximum charging coverage whether a phone is placed in landscape, portrait or simply not perfectly smack bang in the middle of the charging surface.

There are other standing Qi chargers out there, but I think the aluminium construction and design of the Iron does itself more favours on a modern desktop setting over the uglier plastic competition. 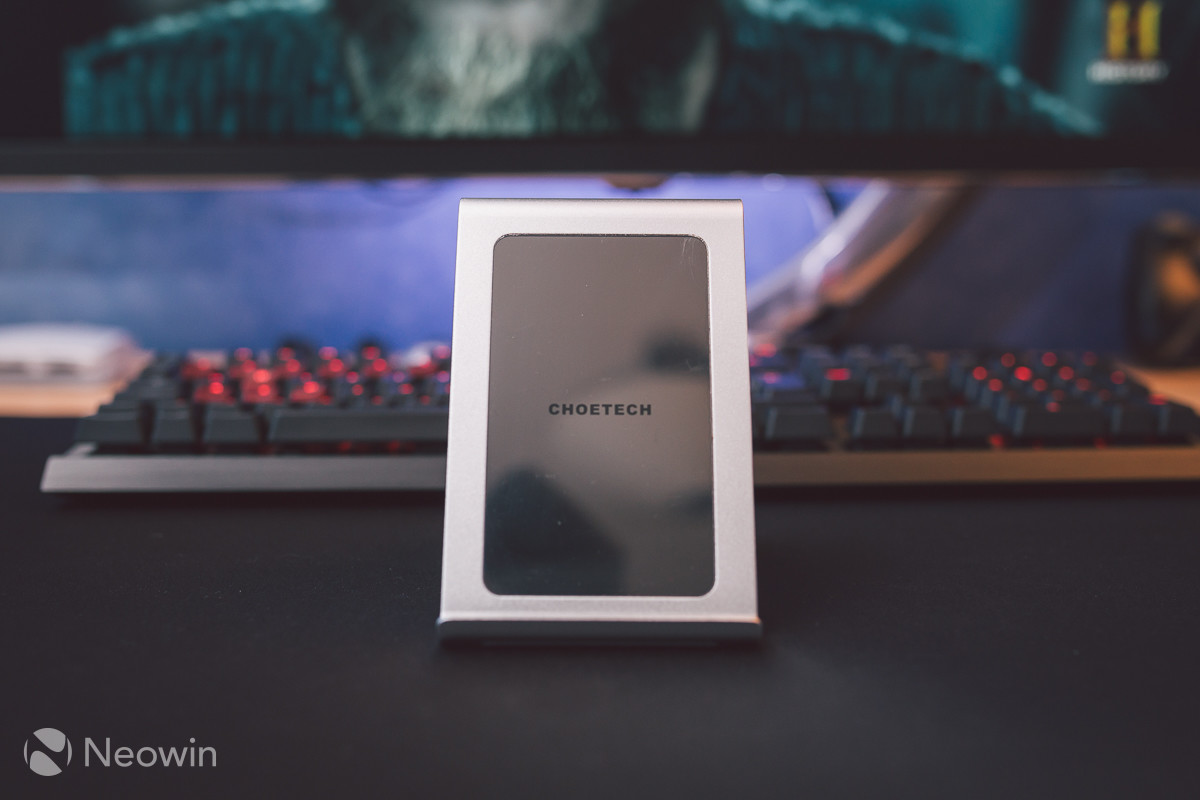 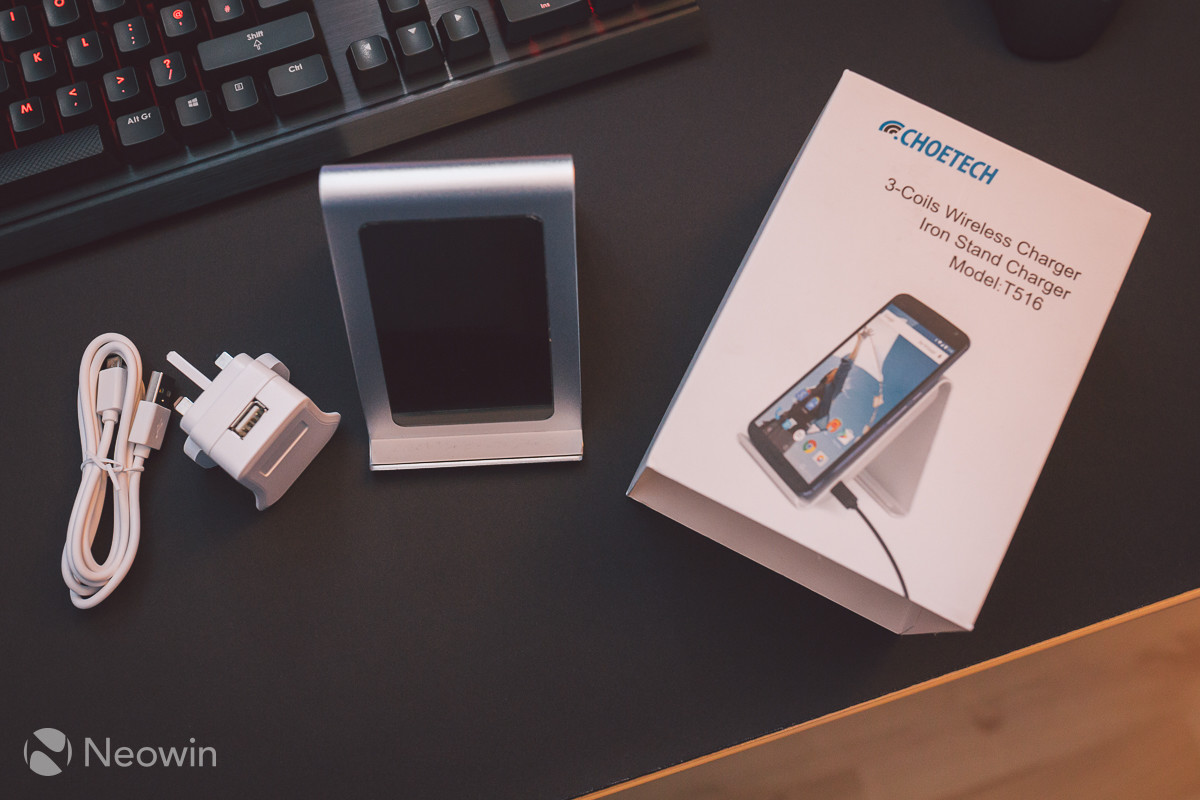 The packaging is a no-frills affair, additional extras include documentation, a USB cable and USB mains adapter. The latter being a welcome addition since even some more expensive first party Qi chargers do not come bundled with a wall adapter or cable. I'm looking at you, Samsung... 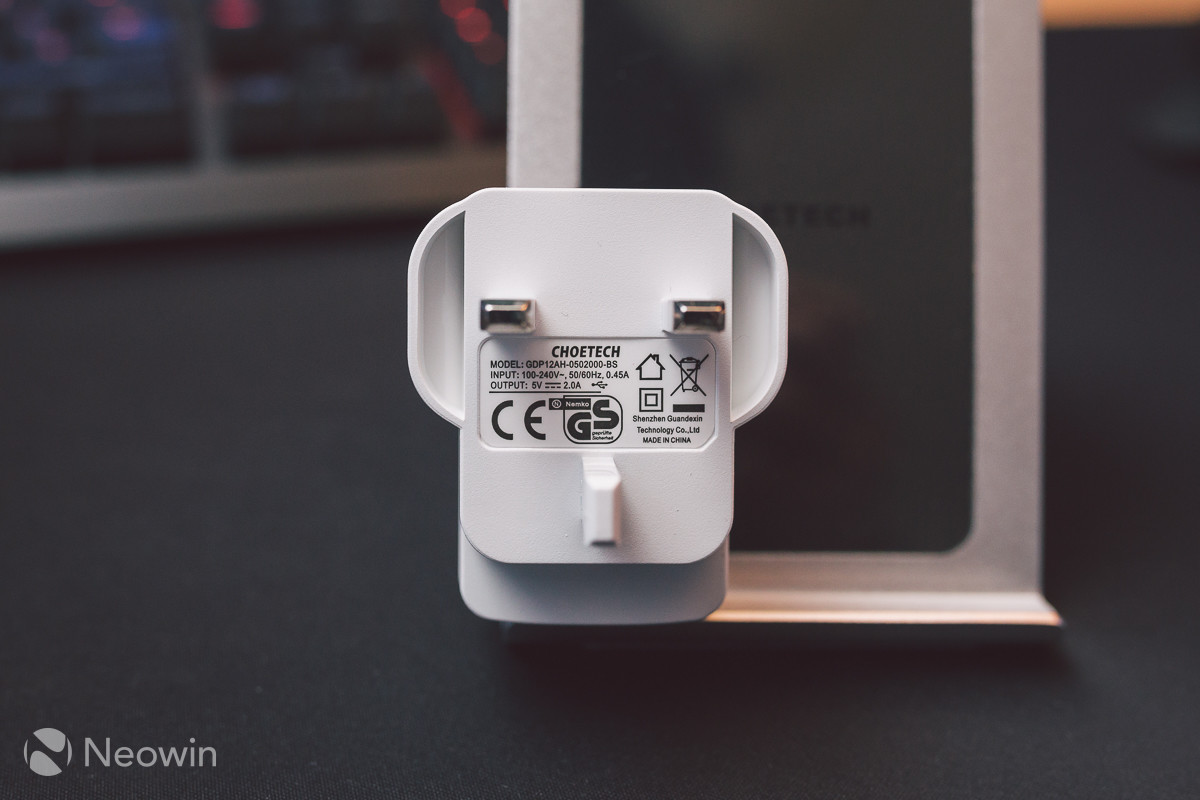 Having said that, the bundled mains USB adapter does feel quite cheap. The kind of plastic that will break if dropped onto a solid surface rather than bounce.

The styling of the Choetech Iron is slick. It feels high quality thanks to the metal construction, it feels like I could chuck it about the office and it wouldn't really care. 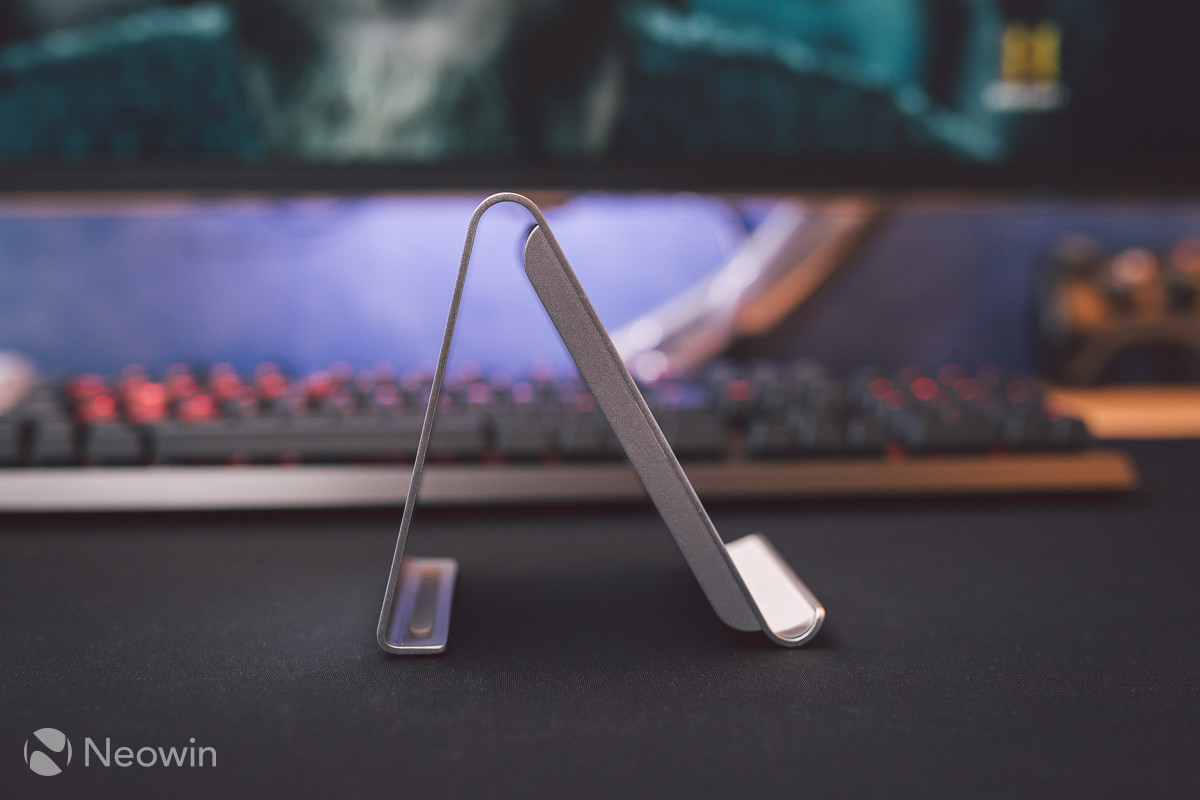 The left side has no ports or lights, on the right side though, we see a micro USB port and 4 small holes. These holes hide a single blue LED that glows through each hole (see header photo at the top of this page). They do not serve as any kind of charge level indicator, but only a means to know power is flowing through wirelessly to a phone when placed on the Qi surface. 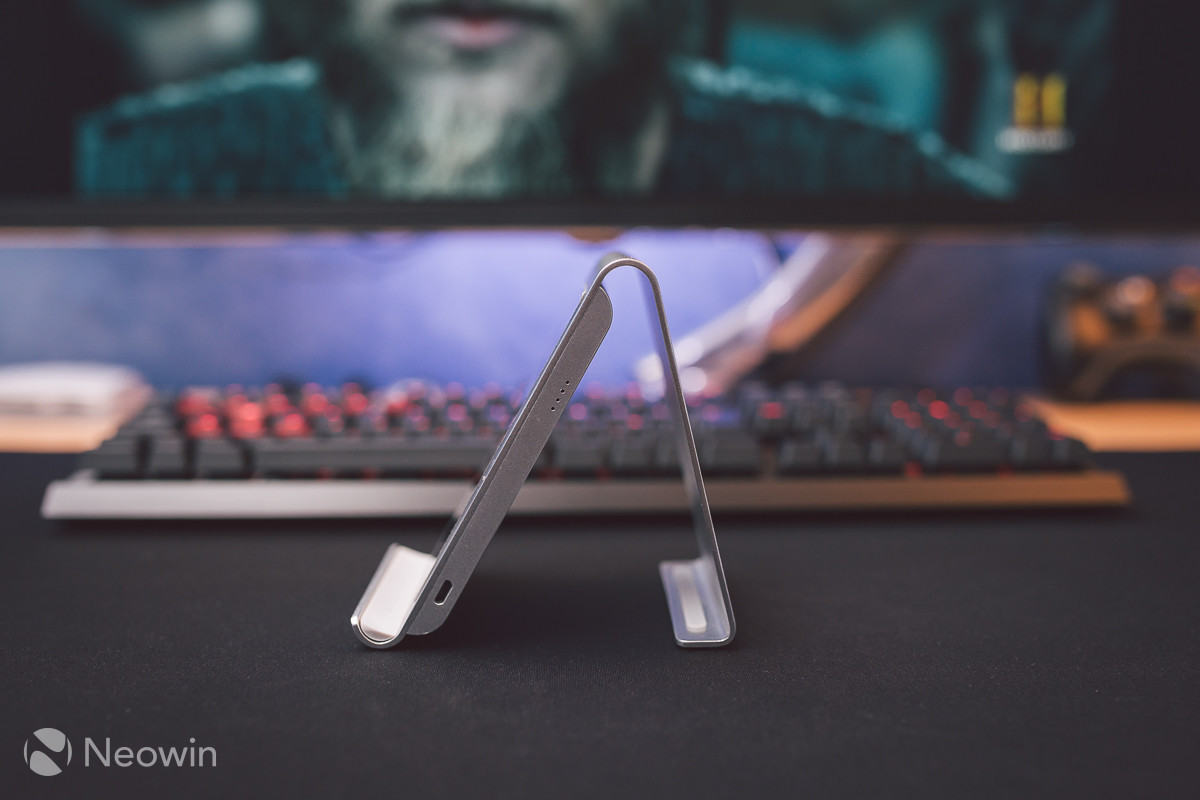 I do have a gripe here though; the placement of the micro USB port seems odd. Why isn't the port at the back? Being on the side means there is going to be a cable sticking out taking up space around the desk and looking out of place.

Idea! I figured I might be able to work around this by using a right angled micro USB cable I had for situations just like this. 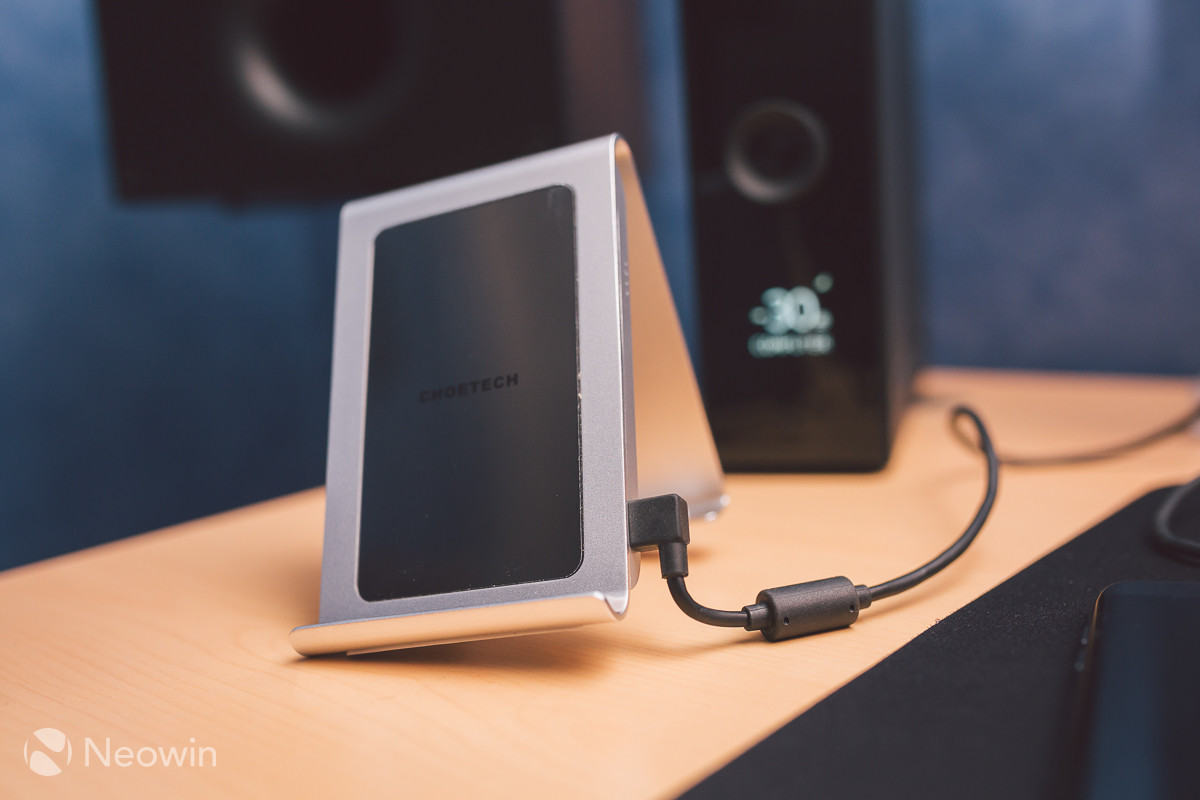 The back of the Iron shows the ratings. Choetech's website does not give details of the power figure for the iron, though on the back of the unit it states 7.5W max. 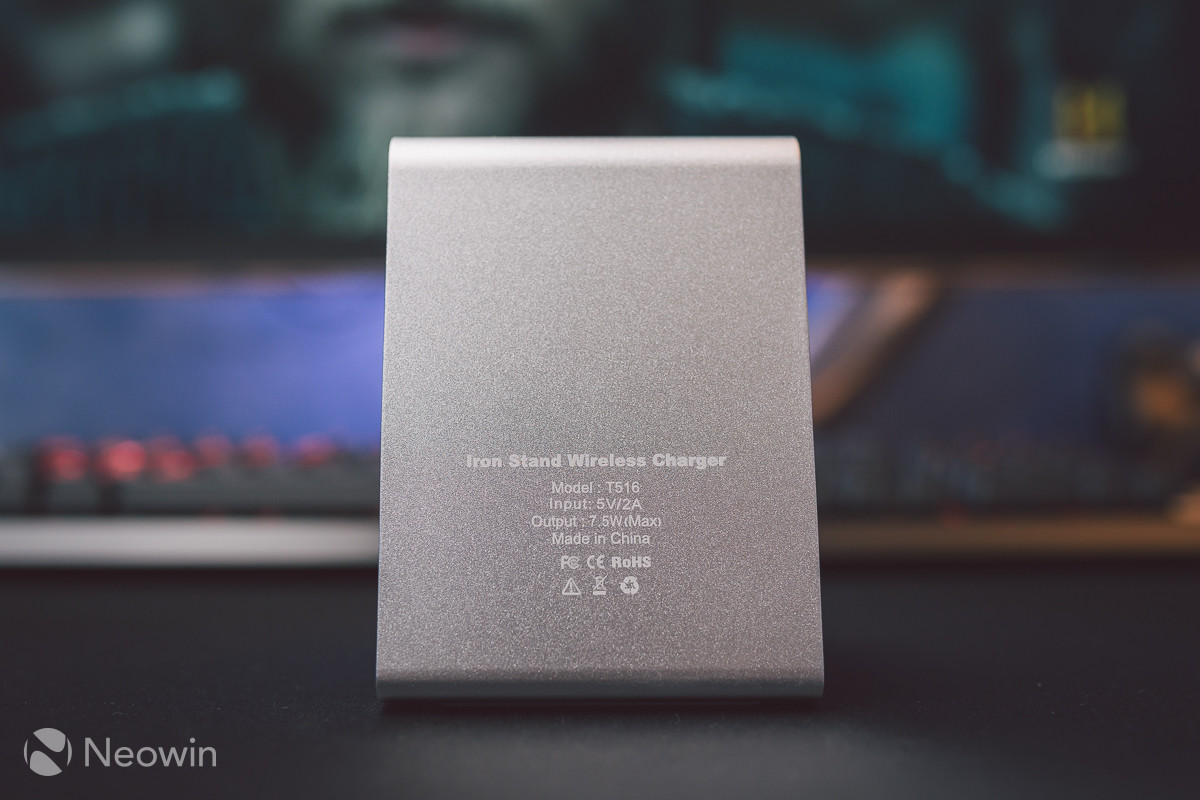 The 2 feet and area where the phone sits incorporate soft rubber pads to stop slipping and scratches. The fit and finish of all these components is quite high and there are no rough edges at all along the metal. 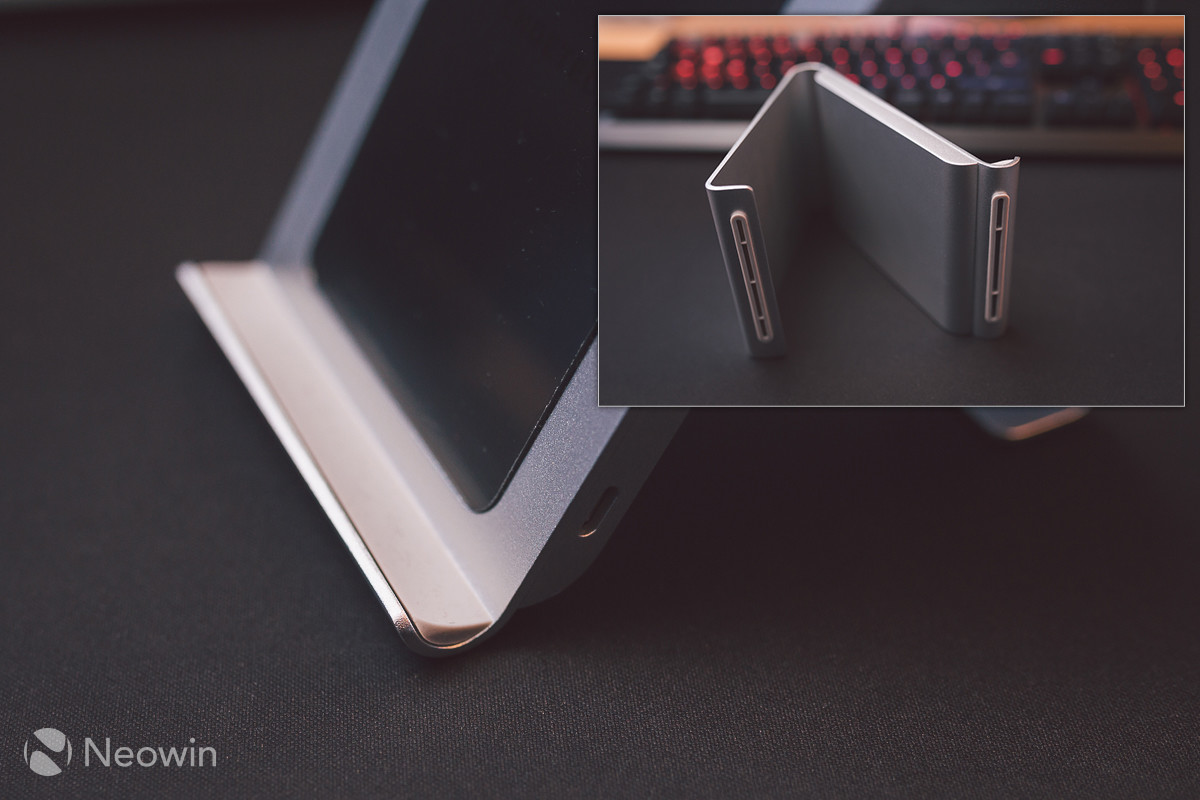 During testing I found the Iron to deliver around 6.3 to 7W on average using the bundled Choetech adapter. I then tried a range of adapters from Aukey, Anker and Samsung where I was able to achieve much closer to 7.5W between them. It seems the circuitry of the Choetech USB charger could do with a little improvement. 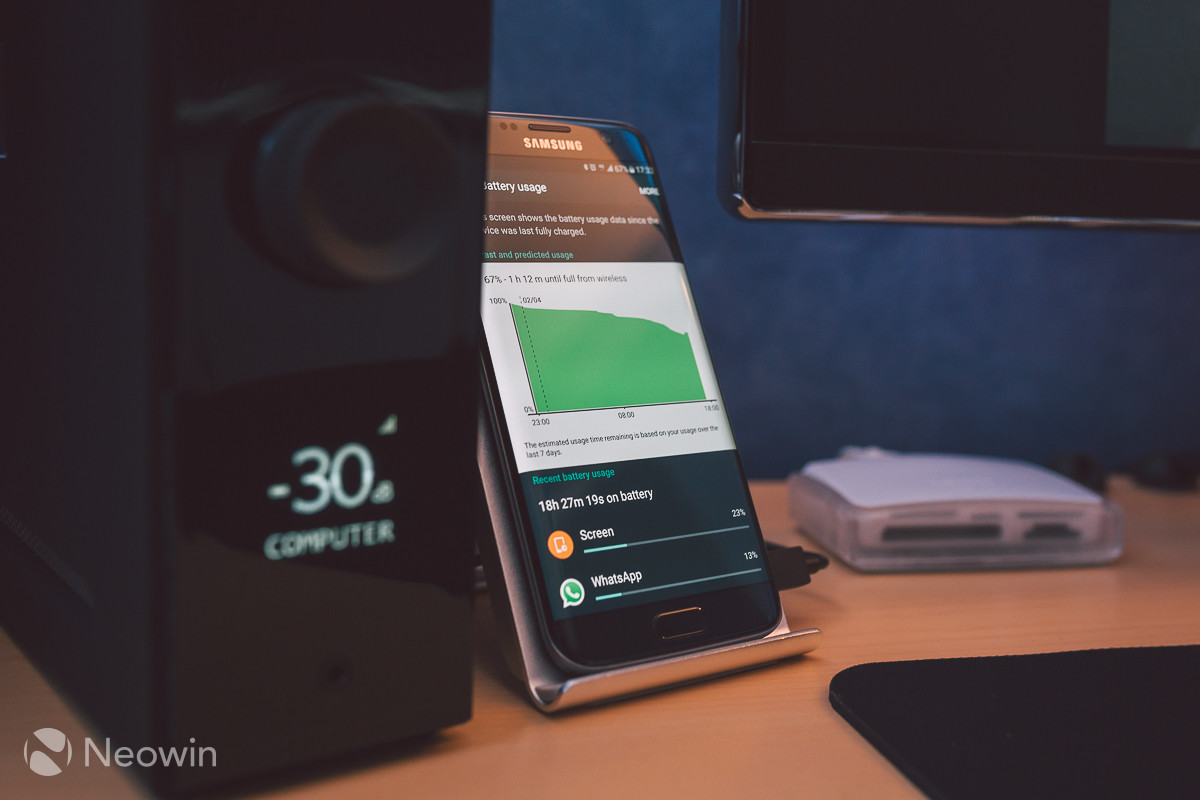 By comparison, the Samsung fast wireless charging base from 2015 averaged nearly 12W of power output when tested the same way. This allowed my Galaxy S7 Edge to charge from 5% to 100% in almost exactly 2 hours 40 minutes as opposed to the 3-4 hours required for the Choetech iron.

Based on the real world power output, I think the Iron is best suited on a desktop or nightstand where a phone will be sat for 2-4 hours at least. The Iron is not a fast wireless charging stand like Samsung's offering, but it does charge faster than the lower power 5W Qi stands on the market. 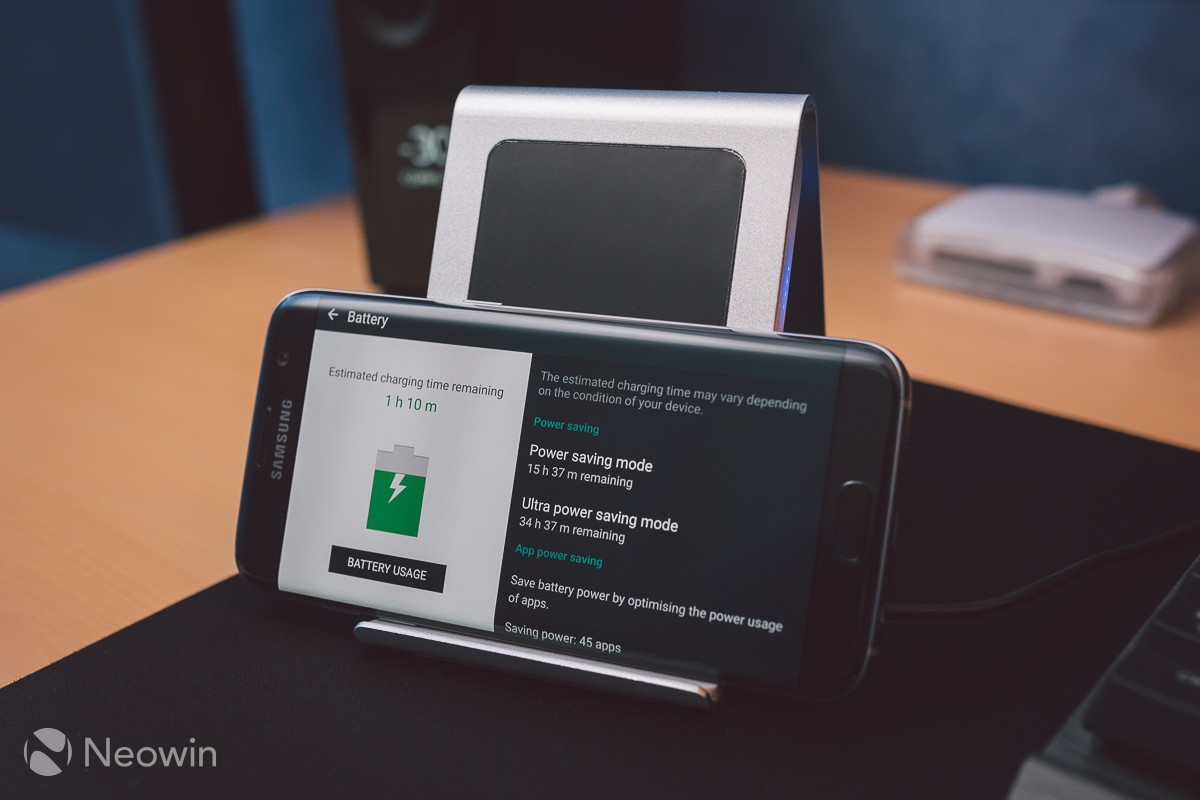 The biggest benefit of the Iron is that you can use your phone while it is on the stand charging.

Awkward micro USB positioning aside, the Choetech Iron certainly looks and feels the part. It also gets close to its specified 7.5W power output, but only when using a higher quality mains USB adapter.

More expensive Qi fast charging solutions from Samsung and Incipio are available, but personally I'm hoping Choetech release a new version of the Iron with 15W output and at a more competitive price. Currently Choetech's fastest wireless charger is the 10W T518.

Finally, I'd like to thank Choetech for giving me the opportunity to review the Iron. An upgraded 15W Iron is definitely on my wish list!