While the Fossil Group didn't announce any fancy new Wear OS watches at CES this year, its Skagen brand did unveil its first hybrid smartwatch. Called the Jorn Hybrid HR smartwatch, it's something that I'm not entirely used to, so when Fossil offered a review unit, I was all-in.

It's probably the most full-featured hybrid watch I've used, not that I've used that many. As you'd expect, it looks like a regular analog watch with physical hands. Underneath those hands is a full E Ink display which can be customized, has complications, and more. You can use the buttons to access a settings menu, adjust do not disturb settings, and even ring your phone.

All of this is $195, which is pretty impressive.

Note that there's also a 38mm model if you've got a smaller wrist, but it's not actually listed on Skagen's website.

The Skagen Jorn Hybrid HR smartwatch is one of the prettiest smartwatches I've ever worn. The reason for that, of course, is that it doesn't look like a smartwatch in any way. This was a big concern from the early days of smartwatches; who wants to wear a screen on their wrist? With this device, you get the best of both worlds. 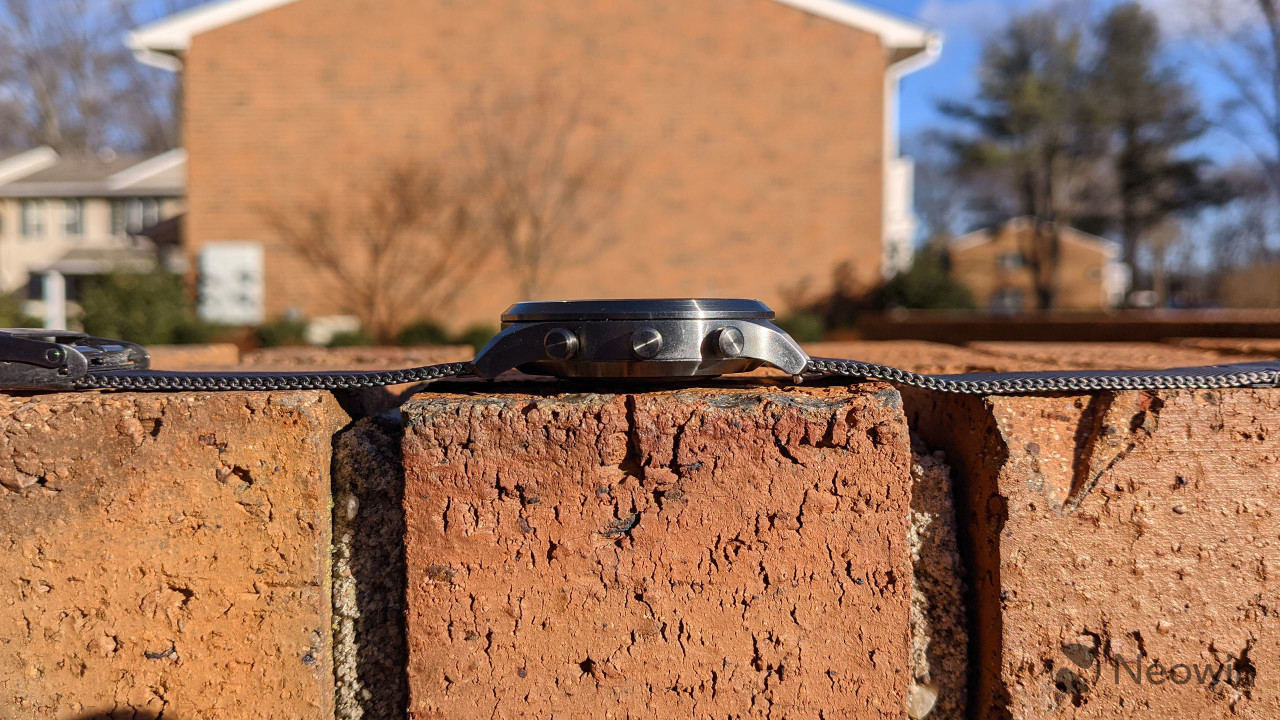 It's also not as thick as many smartwatches, coming in at just 12mm. The stainless steel casing has three buttons on the side, all of which are totally customizable. It also comes in a variety of colors, such as gray, black, silver, and gold.

There's a reason that there are so many configuration options, and it's because smartwatches are all about style, and that's a very personal choice. In fact, Fossil Group only makes a handful of devices, but different brands get to stylize them; that includes Skagen, Michael Kors, Armani, and more. This isn't so much about giving you a way to check notifications on your wrist. It's a watch first, and that's an important differentiation against touchscreen smartwatches. 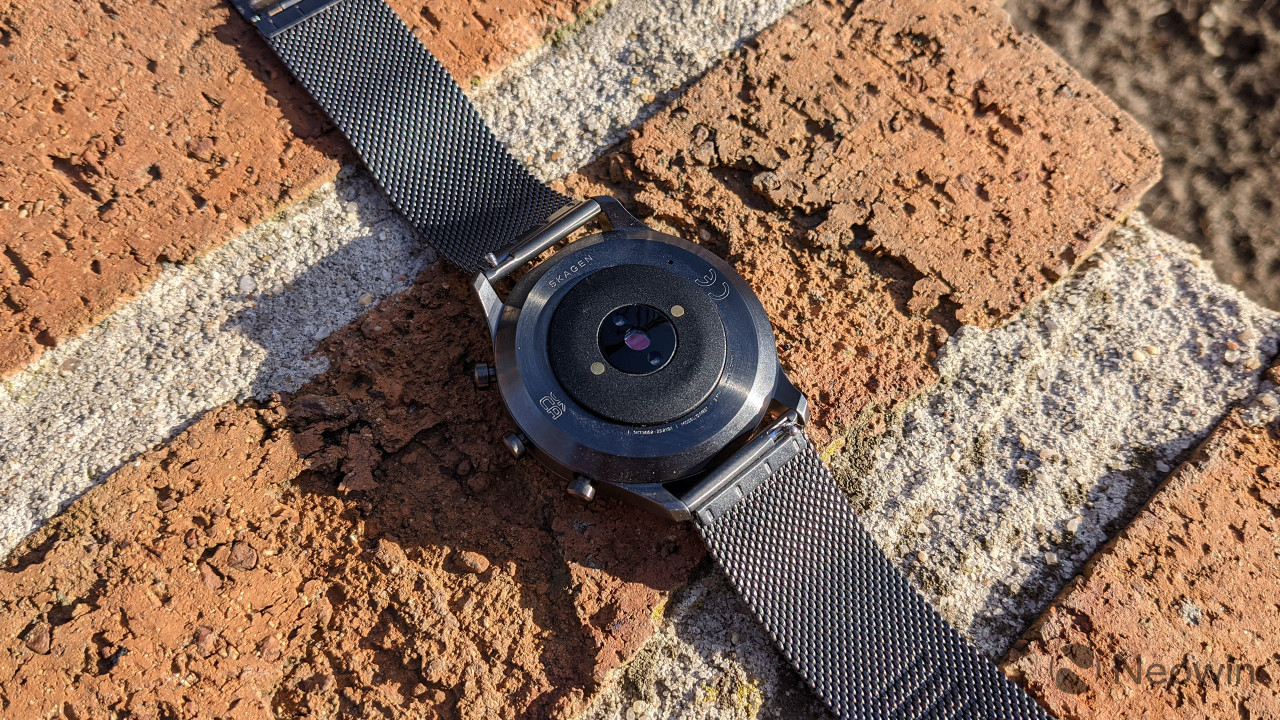 You'll find a heart rate sensor on the bottom of the device, hence the 'HR' in the name. This smartwatch does have fitness-tracking features, and you can actually set up challenges against friends. The only problem is that when you're actually diving into using the features of the watch, things get a bit clunky. Remember, there's no touchscreen.

I was a bit disappointed that it doesn't use the same charging rings that Fossil's Wear OS watches use. Not only is it a good charging system, it just makes it easier to share chargers in a household. 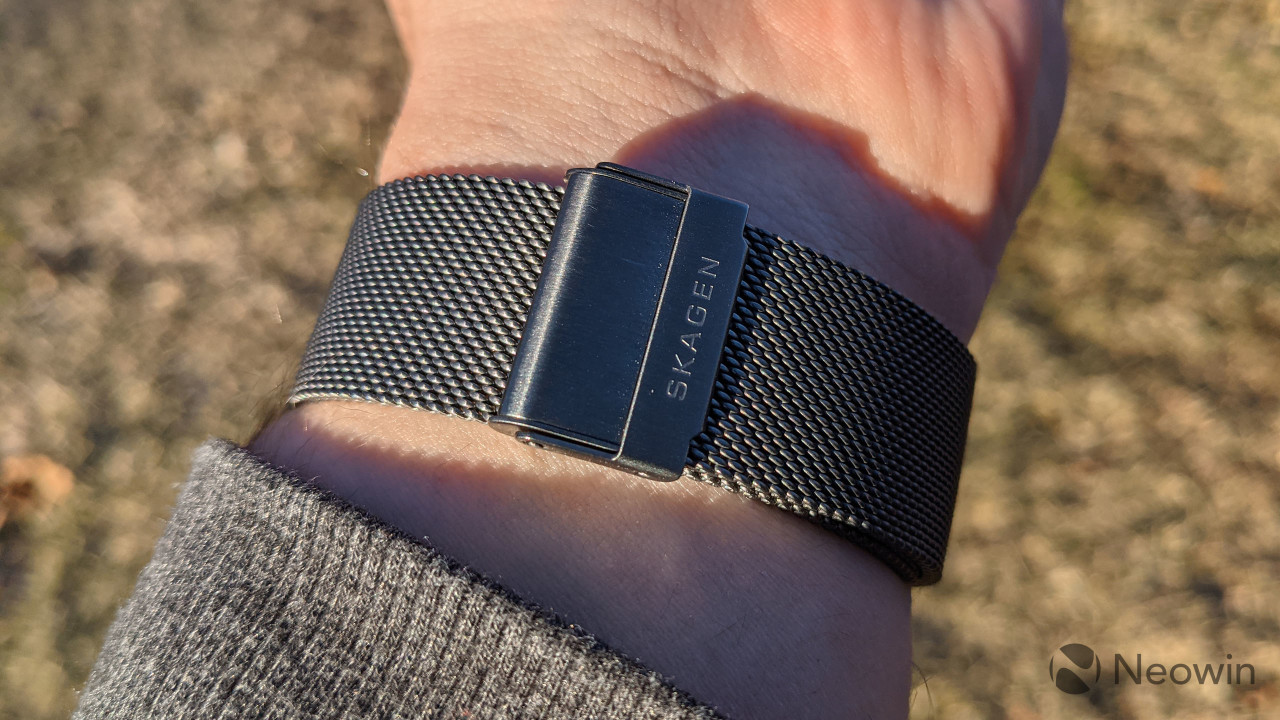 As usual, you can use any 22mm strap that you want. The steel mesh strap that was included looks excellent, although I was unable to figure out how to use it. I felt a bit better about that after I saw that Skagen actually published a YouTube tutorial for it.

I was a bit surprised at how full-featured this device it. Like I said above, you can't control it with touch, but you can control it with the buttons on the side. There is one thing you can do by tapping the display though, and that's to turn on the frontlight. 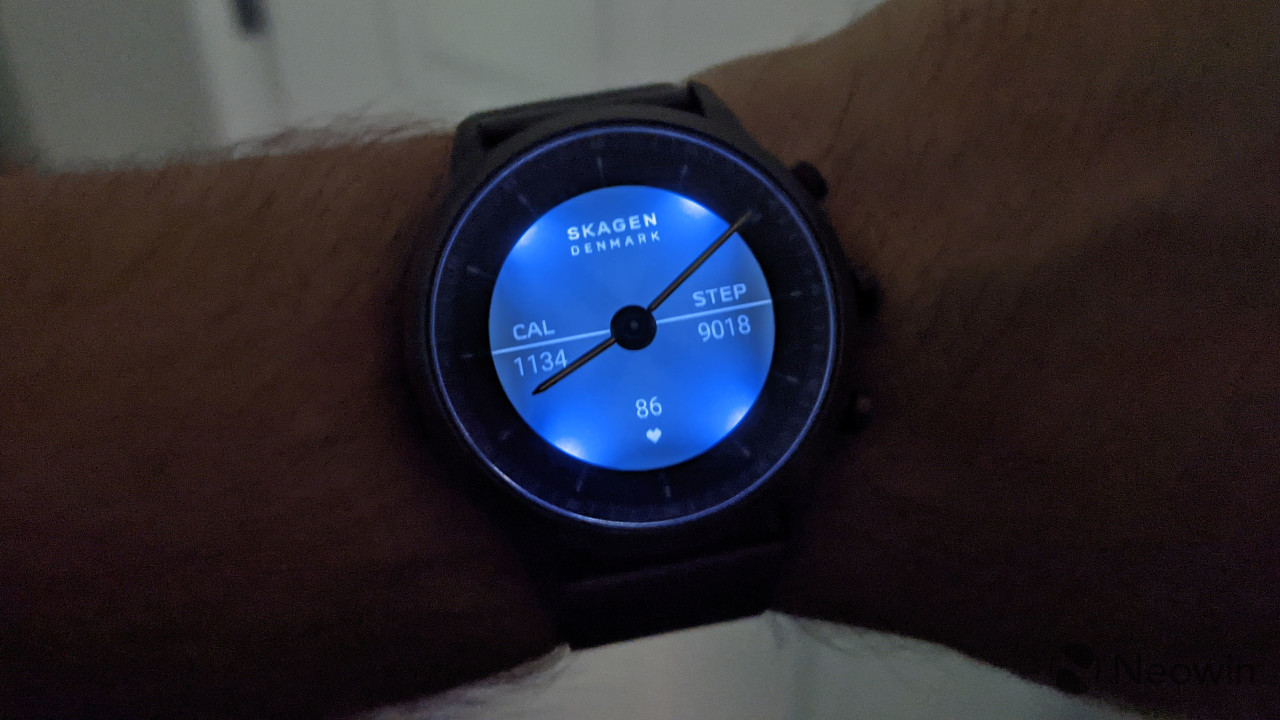 Indeed, it lights up in the dark just like you'd hope, and it won't do it automatically by raising your wrist, annoying fellow patrons in a movie theater or anything like that. The main watch face can show several complications, and you can actually customize the whole thing; in fact, you've probably noticed several watch faces in the photos so far. 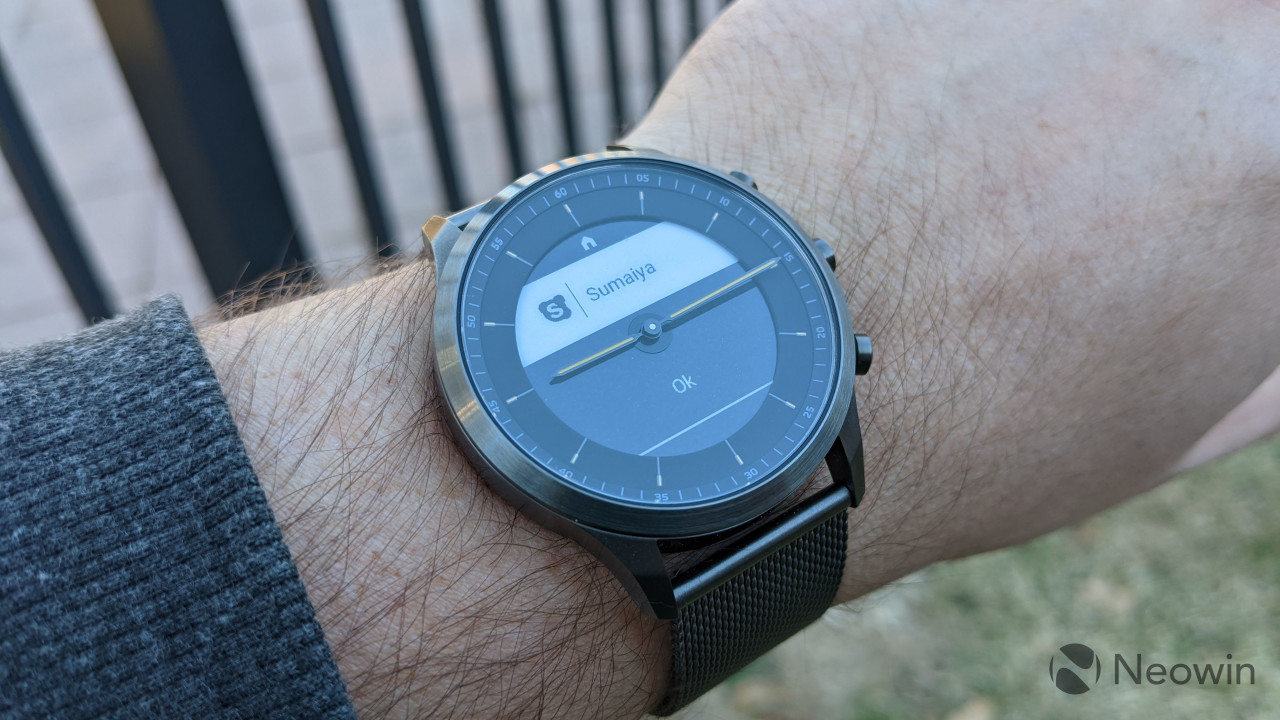 When notifications come in or when you're navigating through the menus, the hands automatically turn to nine and three. That's so they'll be out of the way for what you're trying to do. When notifications arrive, you'll actually see that you can't read most of the message most of the time, so you can click the middle button to expand it. 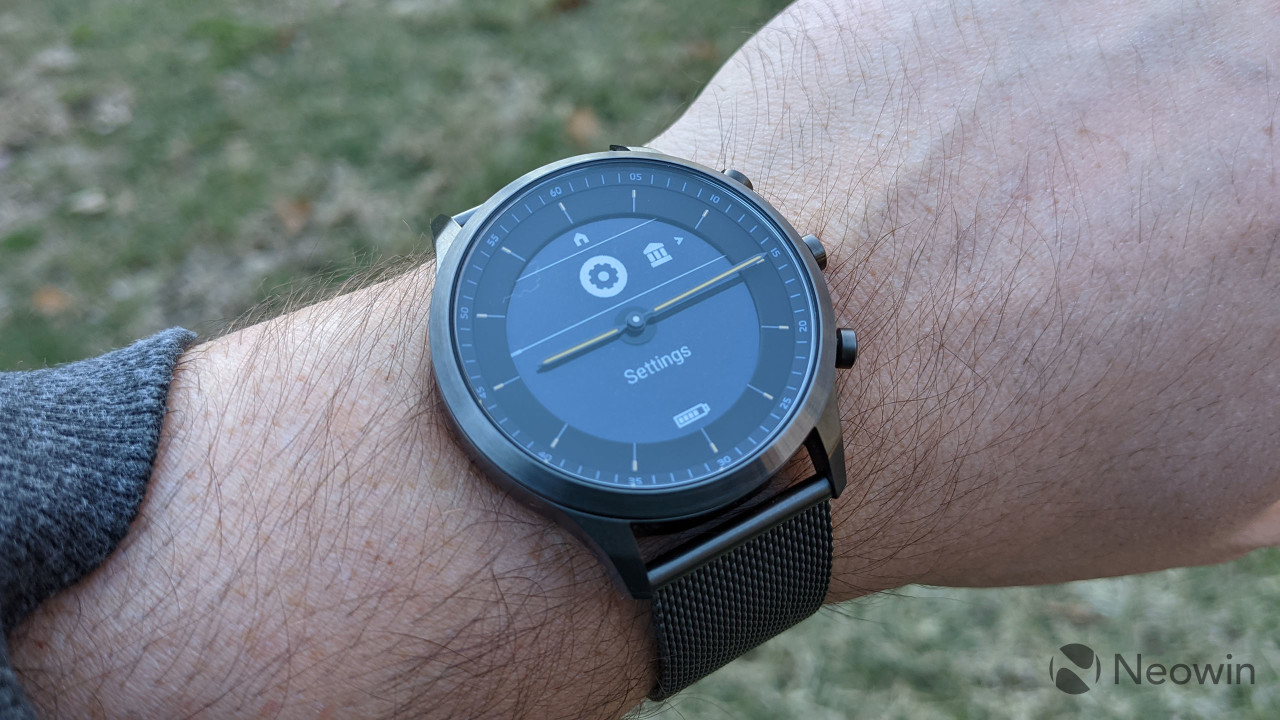 Holding the middle button brings you to the main menu, the first option on which is Settings. You can press the middle button to select it, and use the top and bottom buttons to navigate left and right, respectively. It's all a bit clunky, which isn't surprising, as I wouldn't expect lightning-fast performance from something like this. 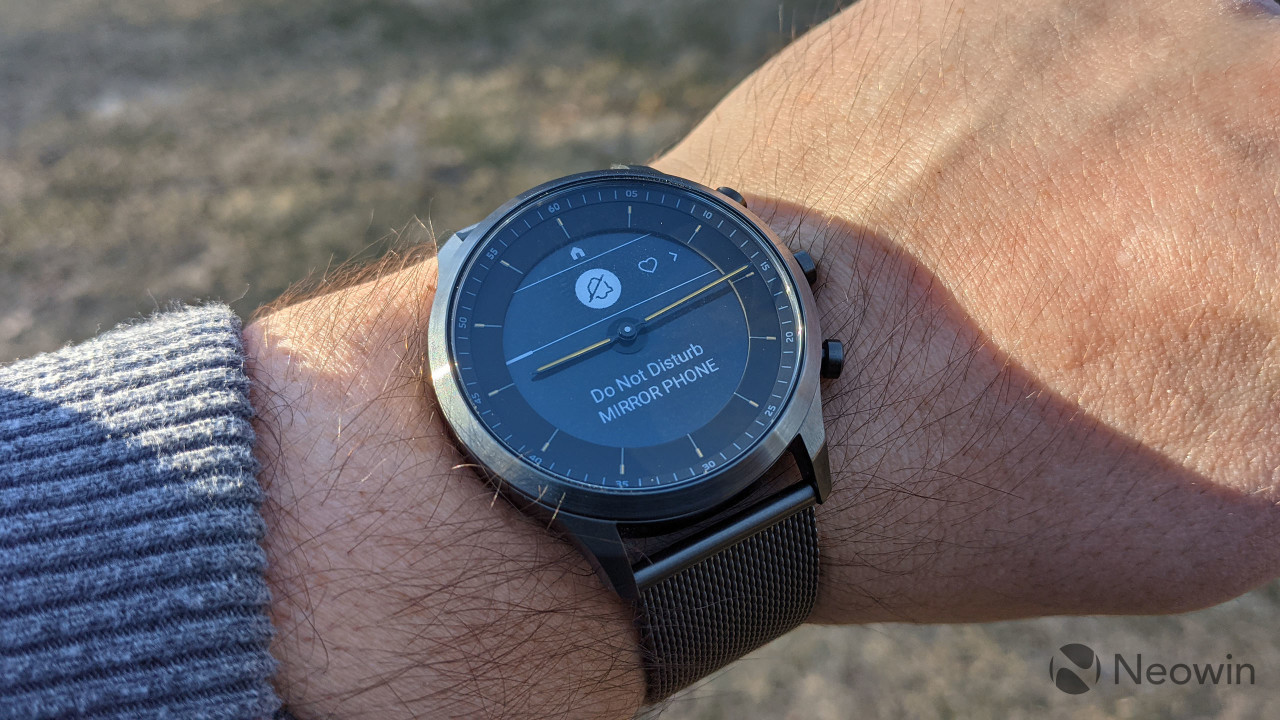 I do want to give a shout-out to one specific setting though, which is Do Not Disturb. By default, it was set to mirror my phone, and that feature works with both iOS and Android. The first night that I wore the Jorn, I was searching for an easy way to turn on do not disturb so I could wear it to bed and track my sleep. When I found out that it did it automatically when I set my phone that way, I was impressed since many full smartwatch platforms haven't even mastered that yet.

Another thing that's nice is that this thing gets crazy battery life, at least when compared to a touchscreen smartwatch. Skagen promises up to two weeks without requiring a charge, and it delivered.

If you're familiar with hybrid smartwatches at all, then you know that functionality is a blend of doing things on the watch and within a companion app. Functionality tends to be more app-focused as it's more limited on the watch. You'll also see this on fitness bands and such. Personally, I feel like this device leans just a bit too much toward handling functionality on the watch itself. For example, when I was trying to find do not disturb settings on that first night, I started in the app, but there are few settings there.

There are two key things that you can do in the app. The first is obvious, as it's how you access all of your fitness data. There's simply no way to do this on the watch itself outside of a basic Wellness app, and that's fine. You can check your steps, calories burned, your sleep, and more, and you can do it in daily, weekly, and monthly views.

The other thing that you can do is customize the watch. Indeed, you can totally swap out the watch face for a new one, and while Skagen has a selection that you can download, you an even make your own. It's pretty impressive.

You can also swap out the complications for a variety of other stuff, such as your steps, calories, heart rate, the weather, workouts, commute time, a timer, and more. As you can see from the image above, you can also customize how many complications are actually on the watch face.

And finally, you can customize what the buttons do. Customizable buttons on smartwatches are a feature that I often overlook, but I'd advise overlooking them on this watch. They're your shortcuts through a clunky, slow UI. Without them, it takes 13 clicks to get to Workout.

The app has other functionality too, such as setting your preferred units of measurement, integrating it with Google Fit or Apple Health, and setting up challenges. Also, and this bit is pretty annoying, but you have to agree to a lot of permissions in the app, and you have to do them all manually. For example, you'll set up the Jorn and wonder why the Weather complication doesn't say anything, and it will turn out that you have to dig into the app to agree to let it access your location.

I quite like the Jorn Hybrid HR, and my biggest complaint is that it requires a bit too much work to get it up and running just right. You have to set the shortcuts in the buttons, you have to dig through the app to agree to permissions, and you have to set the complications you like. If you don't take the time to do that, you'll find yourself navigating the UI a lot more than you'll care to. 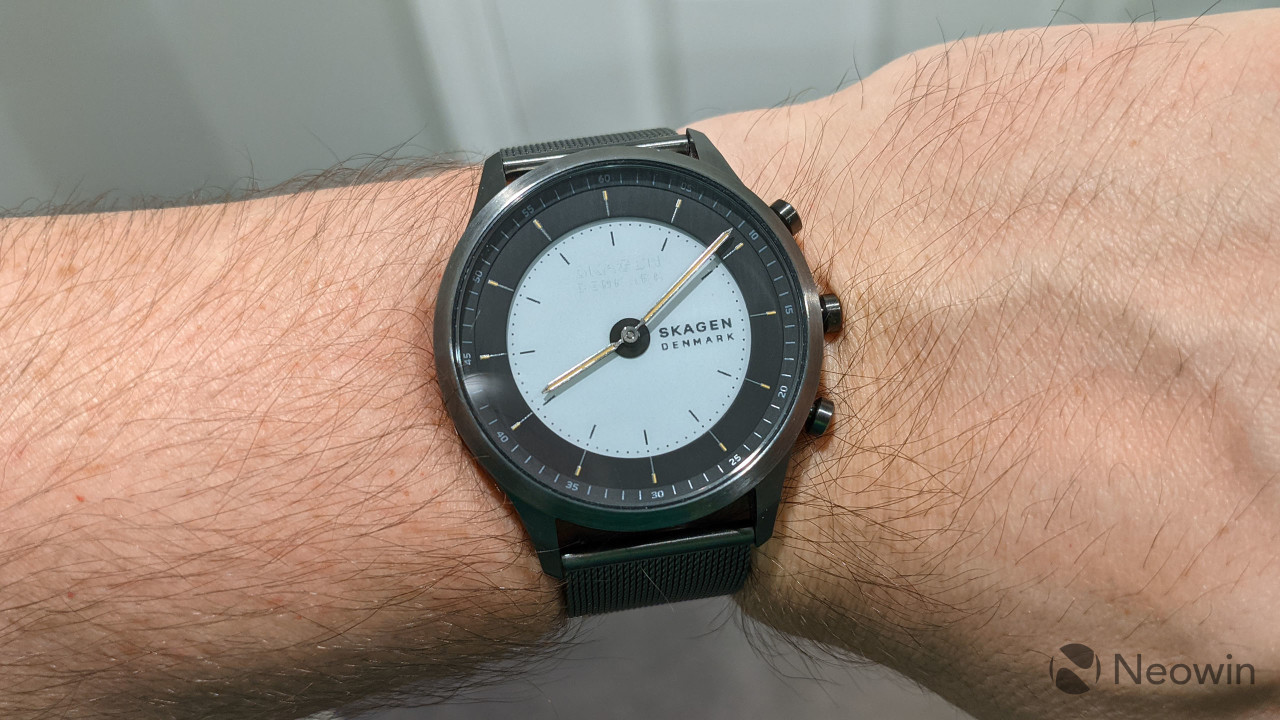 But the bottom line is that this is a stylish, practical hybrid smartwatch, and it's pretty inexpensive at $195. It's something that feels good to wear, and it doesn't even feel like an incomplete product. It's surprisingly full-featured for something that I frankly expected not to be.

You have to think of it like a watch first. Smartwatches are extremely personal products, and from style to functionality, they have to fit the thing that you want. No, there's no app ecosystem like you'll find on Apple Watch and Wear OS, and no, there's no music playback. But if you're the type of person that doesn't want a screen strapped to your wrist, and you're looking for a more classic look, the Jorn Hybrid HR smartwatch might be for you. Plus, you so rarely have to charge it.

If you want to check it out on Amazon, you can find it here.