Software developer Stardock continues to add support for Windows 8 to its current software products, along with new applications made especially for Microsoft's newest OS, including Start8, Decor8 and ModernMix. Today, the company released a new version of one of its older software programs that adds a way to put in a much requested look to the Windows 8 desktop UI. 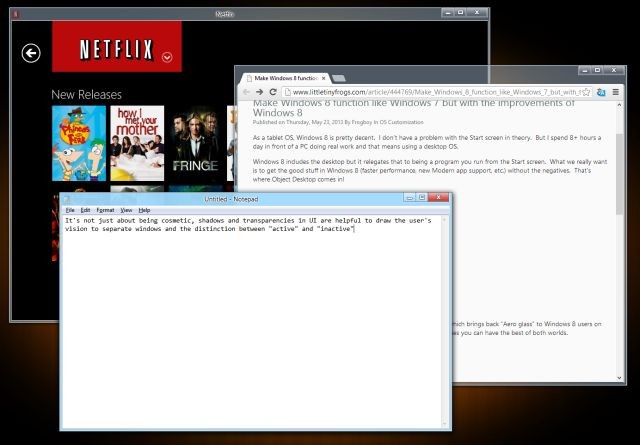 As posted by Stardock CEO Brad Wardell on his personal blog, the beta version of WindowBlinds 8 is now available to download as part of the Object Desktop subscription service. WindowBlinds 8 allows users to customize their desktop with lots of different skins and one of them happens to be the Aero glass look that many users of Windows Vista and Windows 7 prefer to the look of Windows 8.

We include some “skins” that are timeless favorites plus a few that represent what we thought (hoped) the Windows 8 UI might have been like to choose from.  Plus there are thousands of skins available at WinCustomize.com.

Currently the beta build of WindowBlinds 8 (version 7.90) is available only via a subscription to Object Desktop, which allows access and updates to all of Stardock's programs for one year for $49.99. A stand alone version of WindowBlinds 8 will be released in the near future when it comes out of beta; the program only supports Windows 7 and 8.