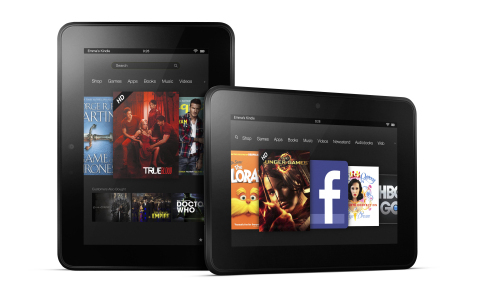 Amazon announced a boatload of new members of the Kindle Fire tablet family earlier today at a press conference in Santa Monica. However, when the company's CEO Jeff Bezos was showing off the Android-based tablets to the assembled members of the press, he apparently forgot to inform them of one major "feature".

As revealed in Amazon's new press release, all of the new members of the Kindle Fire lineup, including the $499 Kindle Fire HD with 4G LTE support, will included mandatory ads on the product's lock screen. While Amazon has sold versions of its Kindle eReaders with the option to either buy ad or ad-free devices, the original 2011 Kindle Fire did not have these ads at all.

In the press release, Amazon said:

The new Kindle Fire family comes with special offers that appear on the lock screen. Examples of special money-saving offers that customers will enjoy include a $5 credit in the Amazon MP3 Store and a $5 credit for select titles in the Amazon Instant Video Store. Customers will also receive special offers and screensavers from brands like AT&T, Discover and Intel, such as a special offer of a $10 Amazon.com Gift Card when a customer uses their Discover card to purchase a digital product on Amazon.

The company is currently not offering consumers a way to turn off these "special offers" if they don't want to have their lock screen cluttered with an AT&T ad.