Toshiba isn't going down without a fight. As previously reported, TigerDirect dropped its price of Toshiba’s third generation 1080i-capable HD-A3 and now Amazon seems to have done the same. Toshiba's A3 is now available on Amazon.com for $139.98, while the 1080p-capable HD-A30 is priced at $179.98. Granted, these are not the sub-$100 prices we’ve seen before, but this is after, not before, the holiday season. Rumour has it that other retailers have or are about to follow suit. It seems to me as if the Xbox 360 HD DVD add-on has some competition. 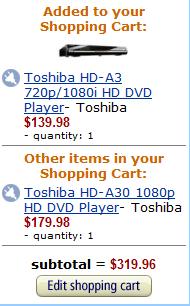