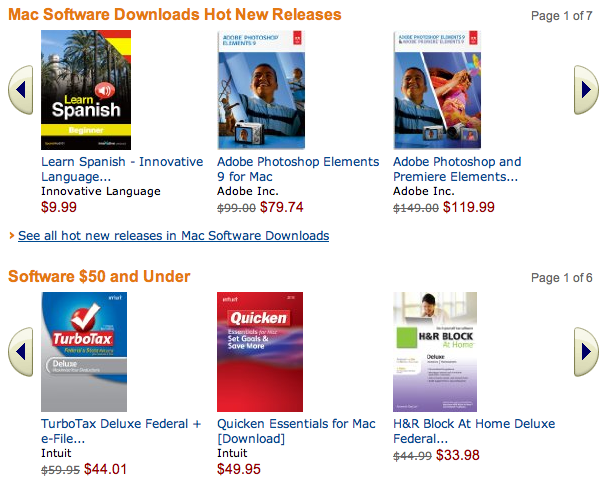 Amazon has quietly added a new extension to its software download store, adding 250 applications and games for Mac OS X, according to Arstechnica.  Amazon apparently uses a standard download manager to install the applications. Some of the applications found on the new store include Microsoft Office, QuickBooks, Photoshop Elements, Toast, Dragon Age Origins, and The Sims 3. None of these titles are available on the Mac App Store. One has to wonder if Amazon is taking a swipe at Apple for suing Amazon over the term App Store in its new Android store.

The discrepancy, however, is due in part to Apple’s requirements for App Store distribution. All Amazon requires, however, is for developers to integrate with Amazon’s payment system and generate license keys when a title is downloaded. Amazon users, however, must enter keys manually. Amazon uses its Amazon Cloud service to store downloads so users can download the title again if needed.

Amazon calls its service “Mac Downloads Store,” possibly to avoid further conflict with Apple. We will have to continue watching this saga as it plays out. For those Mac fans out there, a screenshot of the store is above. In addition, you can check out the store at Amazon’s site.