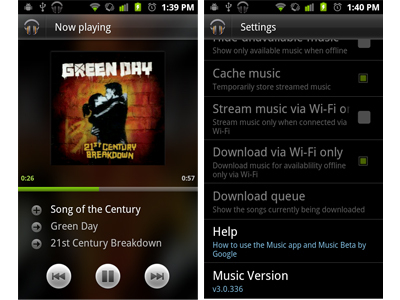 According to Business Insider, the blog Tech from 10 has received a l copy of the next generation version of Android's music application. The player is similar to the the version featured in Honeycomb, version 3.0 of Android, and brings a ratings feature from Google's cloud music service, which is expected to launch soon.

Tech from 10 was apparently able to get a hold of the application after Google made a mistake by releasing a developer version of the Android Market. Business Insider says this is the "clearest proof we have of Google's cloud service, which is supposedly being tested with Google employees."

This latest news follows a story featured last month when hackers accidently discovered the new Google music locker which allows users to store their music on Google servers and then stream it to any device, anywhere. Google first started showing a similar platform at the I/O conference last year, but has so far not been able to get the required licensing from the record industry. There is currently no news on when a service featuring this technology might be available to the masses, but if this leak is anything to go by, expect to see an application soon.

Update: The site appears to have closed down, and downloads are no longer possible.