As a full-time filmmaker, I need to write a lot. I'd been combing the internet for good, distraction-free writing apps or a while.

Rather than stick to more traditional forms of writing, I write in a format known as markdown (developed and made popular by John Gruber, an Apple aficionado you might be familiar with through his well-known blog, Daring Fireball), which allows me to, for instance, _turn everything I put between two underscores into italics,_ without having to pause my typing to reach for a Ctrl + I shortcut. WhatsApp and Slack, for instance, both support markdown, for those of you that use the services.

After stumbling through multiple potential, functional, but ugly markdown writing apps I found on the internet, a solution finally presented itself, in the Microsoft Store. Admittedly, it's on me for deciding that this would be the last place I would look for comprehensive software. 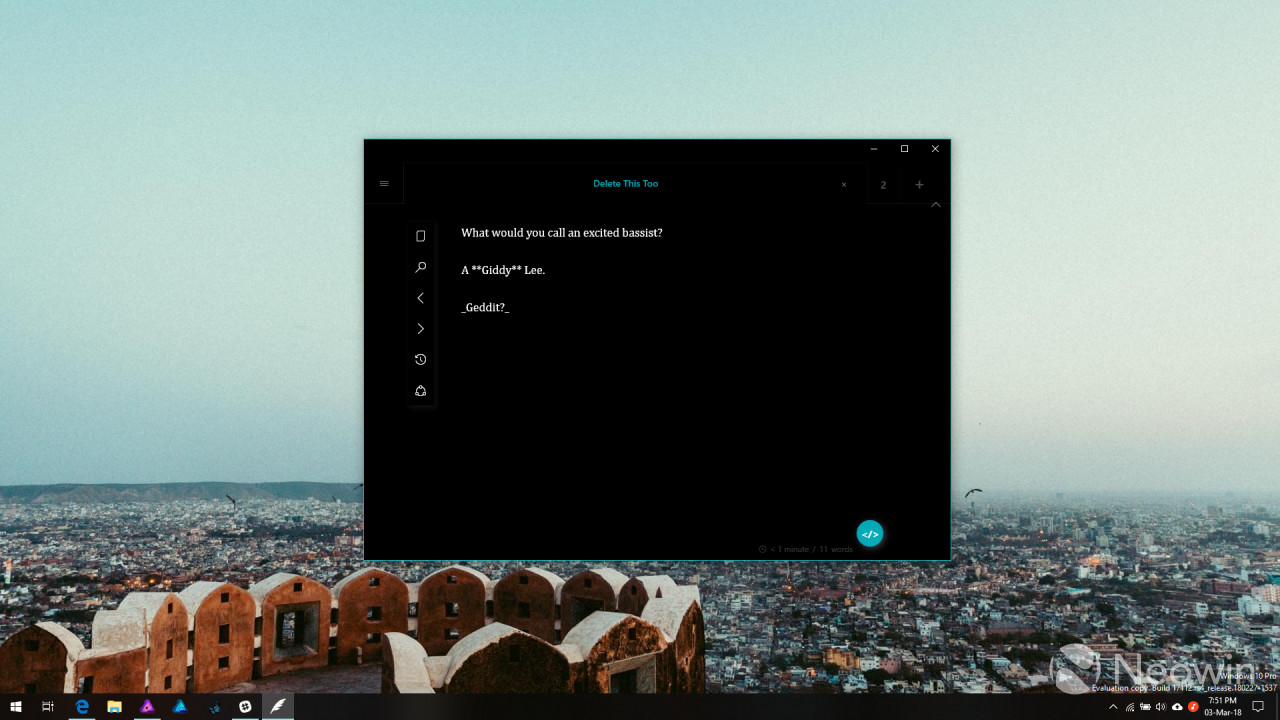 Appy Text, made by London-based developer Bardi Golriz, covered a great deal of what I was looking for in a markdown writing app. It was minimal, but with a robust feature set. I've been using it for a couple of months now, and simply put, it's the nicest word processor I've written on, especially considering its asking price.

The first impression the app sets upon being opened is that of spartan simplicity: aside from web browser-esque tabs at the top and a column of controls with no labels, there's little else in the way of visible controls, which I appreciate, because after a time muscle memory kicks in, making the labels for a small set of controls a waste of space.

As I'd mentioned earlier, the app has full markdown support, with a split-window mode to show you how your text will look as you're typing it. 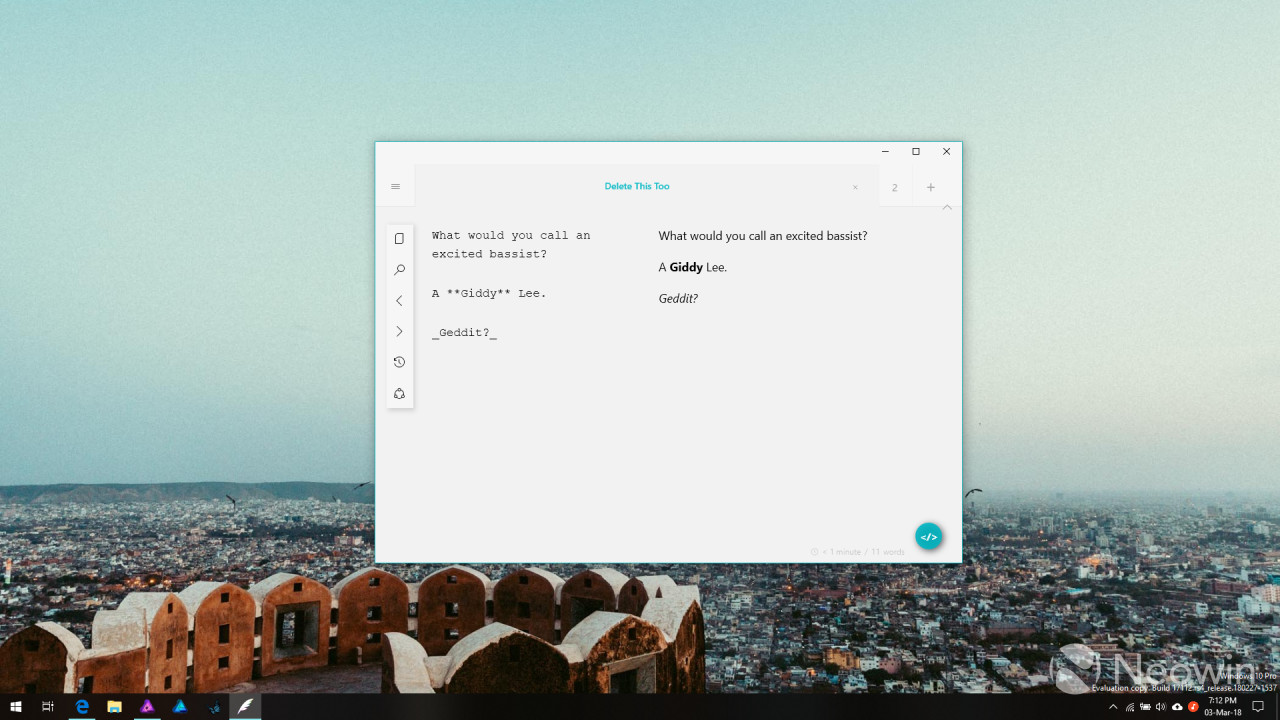 There's an autosave toggle, and a time machine feature that works with it, allowing you to go back to earlier iterations of your draft. Along the same vein, reopening the app after closing it pops you back right where you left off, which means there's no time wasted reopening the text files you'd initially saved.

There's a ton of handy keyboard shortcuts, including one for a focus mode that strips away all controls except for the blinking cursor. This, along with the extensive settings page, allows for a good deal of customizability, which to a new user can quite easily get overwhelming - it was, for me. It gets a lot easier over time, though, and you could simply choose to ignore these and just focus on what you're typing.

As Windows 10 doesn't yet allow you to have multiple instances of a UWP app (that's coming soon, though), the app makes use of tabs at the top for every document you have open. If you dislike this, there's an option to change the tab system into a simpler drop down menu of currently open documents.

Barring these, there are a couple other functions that are often used in a word processor, like find and replace, and word count, but not much else. 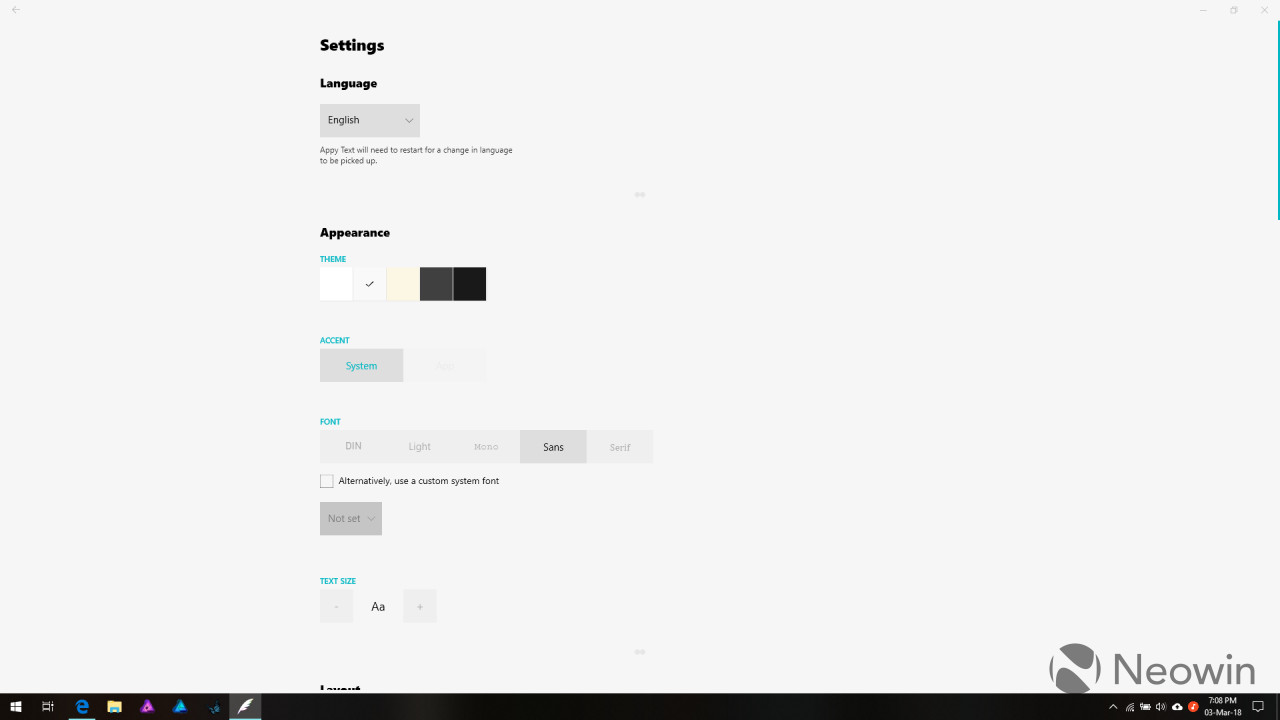 As for features that the app doesn't currently have, I wish it would automatically save files to a dedicated folder, like my Google Drive directory for notes, for instance. It'd make for a seamless workflow between my laptop and my phone.

Do remember, it's not intended to be a bulky, Microsoft Word-esque feature-rich sort of an app - it's made for a different set of purposes, and it performs them splendidly and I wholeheartedly recommend it to those of you looking for such a program.

Appy Text is a UWP app done right. It's stable, well designed, and functional within its singular purpose as a writing software. To me, personally, the lack of a built-in cloud storage save location is a bit irksome for when I want to handoff a write-up over to my phone when I'm on the move, but the absence of this feature doesn't really hurt its usability in a significant manner.

Appy Text is available as a free, full-feature trial for a month on the Microsoft Store. You'll need to pay a one-time fee of $4 after the trial to be able to go on using the app's full feature set, but you have the option to continue using it for free, with premium features like tabs, themes, markdown support and auto-save disabled.