Apple are now rejecting apps which include the word "pad" in their title, it appears from an official email sent out to a developer. It is Apple's latest attempt to prevent people from using its trademarks in applications in the App Store in order to avoid any confusion over whether an app is created or endorsed by Apple.

Jesse Waites, the developer of the ContactPad app, submitted an update to his software - which is currently available in the App Store - only to be told that it was "inappropriately using Pad in the application name." He passed a screenshot of the response he received from Apple to the 9 to 5 Mac website.

The email suggests that if you want to use the term iPad in the app name then it should be phrased as "runs on iPad" or something similar to that. This appears to be an extension to the current Apple policy against apps with iPod or iPhone in the title. 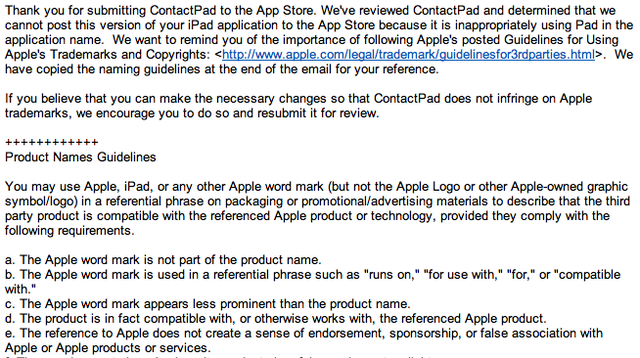