Apple announced on Tuesday that it has launched its online store to sell quality-tested second-hand Apple products in China, to increase its sales. The available refurbished products in Apple's Chinese store include iPod Shuffles and iPod Nanos which are offered at a 22% discount whereas iMac is being offered at a 12% discount. 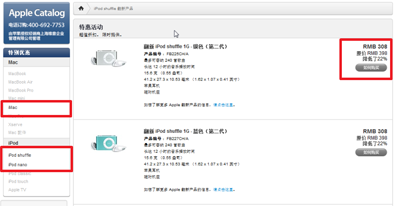 The cost of the used apple products range from US$44 for an iPod shuffle to more than US$2,047 for an iMac. The total number of used products to be sold is not yet known. All refurbished products are sold with a 1 Year quality guarantee. They are only sold online and delivered to the buyers via a phone call to Apple's Shanghai distributor.

Apple has similar discounted refurbished sales deal in other countries like the US, UK and Japan for many years, but to a lesser extent. U.S retailer Best Buy is selling refurbished versions of Apple iPhone 3G that are priced around US$50 less than new ones. Apple's US online store products include Macbook Air which costs US$999, less than half its intro price last year.

The first Apple retail store was opened in China just before the opening ceremonies of the 2008 Olympics. The retail sellers might have nothing to fear about this sale as they offer huge discounts to consumers rather than online sellers.