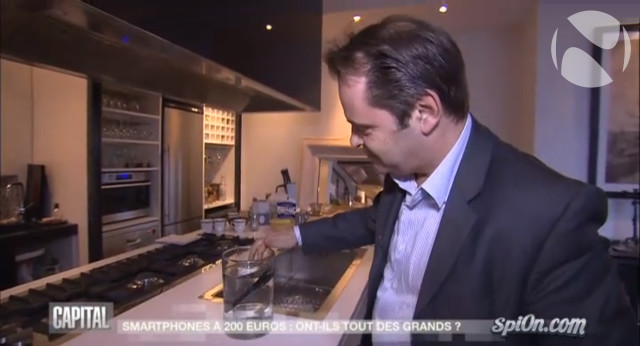 Archos CEO Loic Poirier held nothing back when it came to the Quecha Phone demonstration. Discussing the phone's shock resistance, he dropped the phone on the floor and picked it right back up to show that it was still functioning. Great!

However, it seems that the Poirier became a little too confident in proving the phone's abilities. He decided it was now time to show how the phone is waterproof, and placed it in an empty jug which he proceeded to fill with water. Unfortunately for the CEO, after recovering the phone from the water, he'd found that the phone's screen had stopped functioning. In an attempt to save the demonstration he had tried to restart the phone, hoping it might bring life to the screen, but it seems that it was unsuccessful.

It may have helped if the CEO was familiar with the product itself, as one redditor discovered that the phone was actually rated at IP54, rather than IP67 like the Samsung Galaxy S5. For those who are unfamiliar with the Ingress Protection Rating, it basically means that the Quecha Phone was just protected against splashing water as opposed to full water immersion.

From the phone's product information webpage:

The Quechua 5" Phone complies with the IP54 standard. Developed to withstand the most demanding outdoor conditions. It is designed to withstand splattering with water from all directions as well the harmful effects of dust and sand.

And quickly follows with:

Please note: this product is not designed for underwater use. As with all touch screens, the screen will not work properly if it is very damp or if it is raining heavily. It is advisable to wipe or even dry it for it to work properly.

CEO's: sometimes it helps to be familiar with the product before demonstrating it in front of a camera.

Check the video out below