Everybody knows about Microsoft's recent re-branding and re-engineering of Live Search, Bing, and how it has recently become available for the public to use. There was certainly a big fuss kicked up over this; there was an immense amount of speculation about 'Kumo' beforehand, and many people had their own ideas on what it could be. Now that everything is cleared up, the initial launch hype has died down a bit, and the rumors are gone, the question remains... how will Bing do against Google? Or, perhaps just as importantly... how do Google feel about it?

Most people thought that since Google has the largest market share out of all search engines, to the point where people now say they will "Google" something instead of searching for it, that they would not be too worried about competitors; according to the New York Post, this is quite the opposite. Apparently, Google co-founder Sergey Brin is worried enough about the new competition from Microsoft that he has put together a team of top engineers, to begin making vast improvements to the web service starting immediately. Brin is the head of said team, and the project they will be working on is trying to determine how Bing's search algorithm is different from that of his own; an insider (who asked to remain anonymous) said that, "New search engines have come and gone in the past 10 years, but Bing seems to be of particular interest to Sergey."

Additionally, it is said to be rare that the Google founders join on the daily operations of the company, so having one of them back leading a team there must be quite significant. Bing launched with a hefty "$80 million [to] $100 million" advertising budget behind it, which could also be cause for concern for Google. The new "decision engine" has already reached a market share of 11% (though this was reported that it could just be from the initial influx of users testing it out), over half of Yahoo!'s 20%, though still far behind Google's 60%. Regardless of what's happening, these rumors do help nail in the fact that competition is most definitely a good thing... with companies wanting to push their products and services to be the best, consumers will never come off second best. 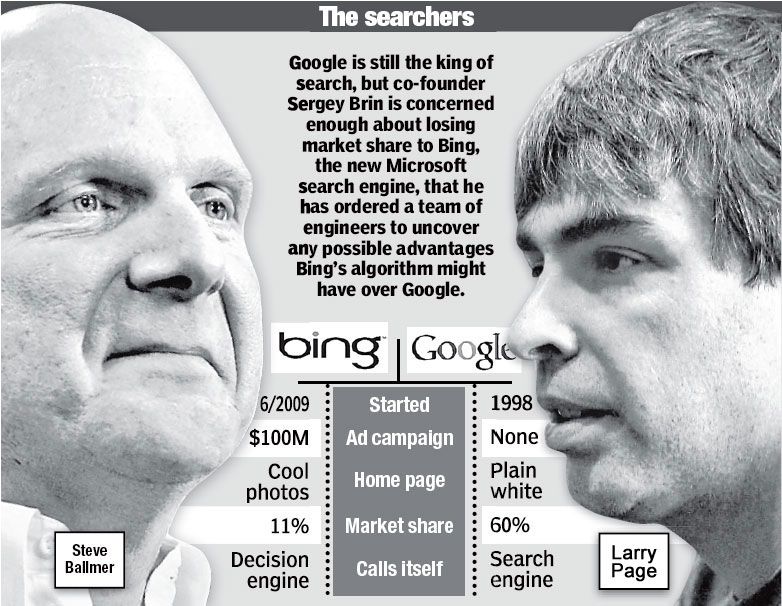 Image courtesy of the NY Times.