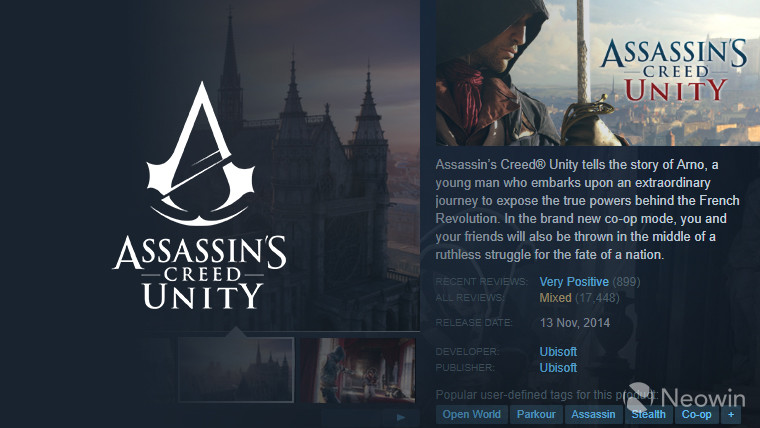 The week started with some upsetting news in regards to one of the most well-known Gothic cathedrals in the world, Notre-Dame de Paris. During renovations, the building's roof caught fire and was eventually destroyed by the blaze, although the main stone structure has thankfully survived. In support of the reconstruction efforts, Ubisoft decided to pitch in and also host a giveaway of Assassin's Creed Unity - which features the building - to raise awareness.

While outside of the giveaway folks can still purchase Unity via Steam, the game still requires Uplay. That said, reviews on the former platform have been improving quite a bit since the announcement of the freebie.

As is obvious from the graph, there was a big spike in positive reviews on April 16, with most if not all praising the publisher for its monetary pledge and of course, the free game.

In many ways, this is the reverse of things like review-bombs that have happened to titles such as Firewatch, Shadow of the Tomb Raider, or previous Metro games following Exodus' Epic Games Store exclusivity announcement. Valve itself decided to combat situations like these by including histograms and deciding to nullify off-topic review-bombs going forward.

In case you haven't done so yet, you can still grab your free copy of Assassin's Creed Unity via Uplay until April 25.