During its CES 2014 press conference today, ASUS not only confirmed its plans to release the previously leaked Windows 8.1 VivoTab Note 8 tablet, it also revealed an all new product; the Transformer Book Duet. The notebook-tablet hybrid runs Windows 8.1 or Android 4.2.2 in either mode. 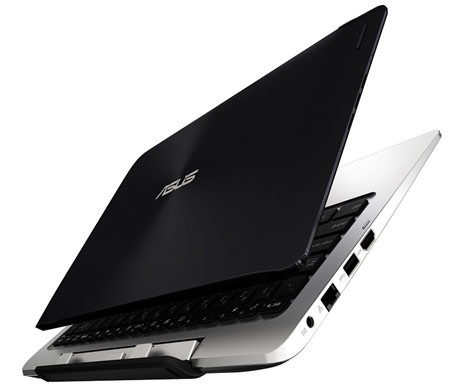 The official press release says that switching between the two operating systems is easy " ... with a single push of the Instant Switch button or a virtual key on the tablet. " The 4.3 pound Transformer Book Duet will use Intel processors up to Core i7 chips. The 13.3-inch display has a 128GB SSD and 4GB of RAM. The keyboard dock offers an additional 1TB of hard drive storage. It's supposed to have up to five hours of battery life when using Windows 8.1 or up to six hours with Android.

ASUS did not provide any pricing or launch date information in its own press release, but Engadget reports that the starting price for the Transformer Book Duet will be $599, or $699 if you want one with a true 1080p display. The hybrid is due for release in Europe late in the first quarter of 2014, but the U.S. will have to wait until the end of the second quarter.