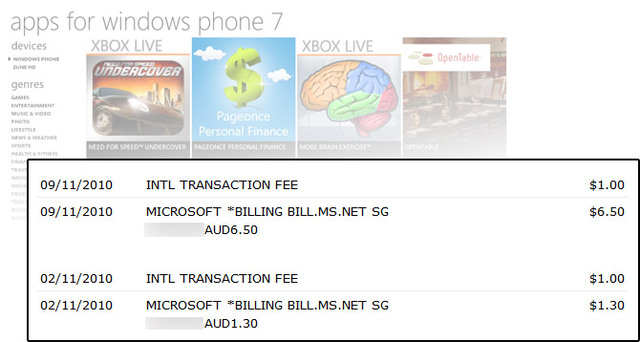 Australian Windows Phone 7 users are being slugged transaction fees for every app they purchase, according to avid Microsoft blogger Long Zheng.

Writing on istartedsomething, Mr Zheng claimed the international transaction fees are adding around AU$1 to every app purchase, with the user not aware of the extra charge unless they check their credit card bill. The issue appears to lie with Microsoft processing app purchases via Microsoft’s Asia Pacific head office in Singapore, making every purchase an international transaction.

By comparison, apps on the Android Market are converted to local currencies by Google, with the exchange rate determined by the user's credit card provider. iDevice users pay a premium of about AU$0.20 on a US$0.99 app, with the extra cost rising to around AU$1 on a US$2.99 app. With the Australian dollar hovering around parity with the greenback, and around 7 billion total downloads from the App Store as of October 20 this year, even those small extra costs represent a large windfall for Apple.

Mr Zheng has reached out to Microsoft for comment, but in the meantime Aussie WP7 users are advised to use carrier billing rather than paying via credit card. The fee issue comes a month after an Australian Windows Phone 7 launch plagued by stock shortages.

It isn't the first time Microsoft has drawn fire for billing issues - in August, Neowin reported that Australian Xbox Live users were paying nearly 20% more for Microsoft Points, the currency powering purchases on the online gaming service, than US users.