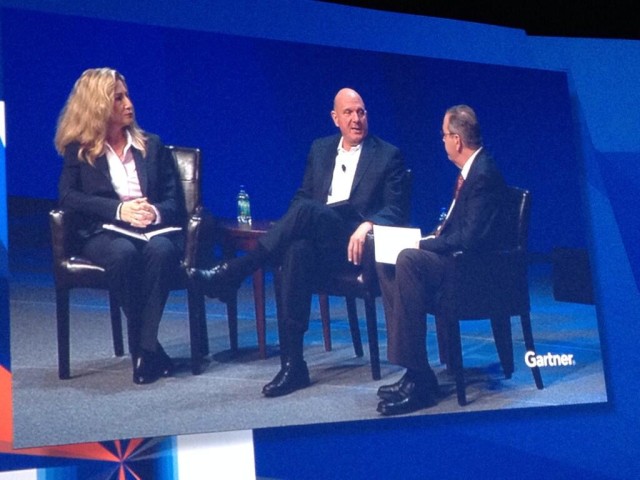 Microsoft CEO Steve Ballmer may be planning to retire in the near future, but for now he continues to promote the company and give hints about future projects at public events. Today, Ballmer sat down in a Q&A as part of the Gartner Symposium ITXpo in Orlando, Fla.

According to ZDNet, Ballmer stated that on the subject of Office for the iPad, "iPad will be picked up when there's a touch-first user interface. That's in progress for Office." Indeed, Microsoft has already announced plans to offer touch-based Office apps via the Windows Store for some time, but that is not expected to happen until sometime in 2014. The company previously announced it would bring Office apps to a variety of non-Windows touch platforms, though Ballmer's comments serve as confirmation that the Windows 8 Metro version of Office will be released first.

One Office-related software program that may never be released for iOS devices is Outlook. The article paraphrases Ballmer as saying he does not believe Apple would allow Outlook to be made available for its mobile platform.

Microsoft is also moving toward one common Windows experience across a number of devices, according to Ballmer, something the company first said in September.

In fact, Ballmer hints that such a common experience is perhaps closer than some people might believe but would not offer a specific schedule. At a recent employees-only event, Ballmer reportedly said Microsoft will release a unified app store for its operating systems.

Ballmer also said during the Gartner Q&A today that the company is not looking to buy a PC vendor, even though Microsoft will be investing $2 billion of its money into making Dell into a private company. He also sees a bigger future with touch devices that include a stylus, such as the Surface Pro, saying he believes "in the power of the pen" and that "a lot of systems will have a stylus built in."