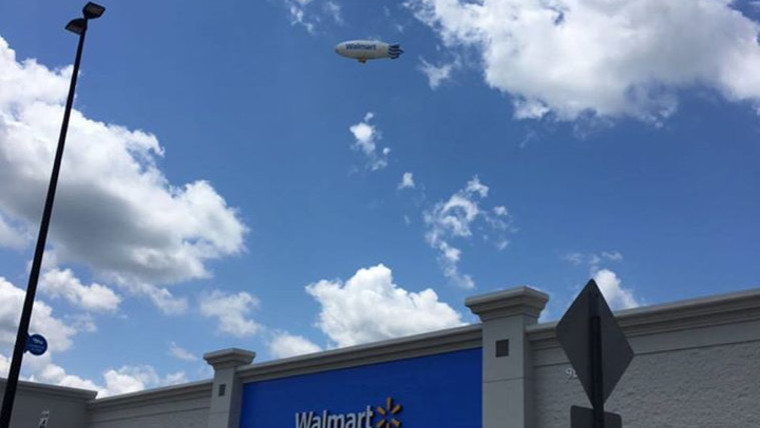 The US Patent and Trademark Office has received an application for a patent from Walmart which looks very similar to Amazon's recent patent for a floating drone delivery warehouse.

The detailed application describes a gas-filled aircraft carrying a number of UAVs, or drones, that it will launch for deliveries and store while waiting to conduct deliveries from the air. This concept centers around drones being used to deliver goods ordered online to people's houses.

The warehouse blimps will assumedly be located above areas with high delivery demands where drones can reach and can subsequently save time and costs in delivering goods. Walmart has not yet made a patent for parachutes to form part of the delivery process, something that Amazon is apparently considering. One of the key differences between this blimp and Amazon's one is that Walmart's blimp will sit at an altitude of between 150 to 300 meters whereas Amazon's will be at around 13,700 meters, this raises a discussion around weather risks at low altitudes versus drone battery and delivery range for high altitudes.

Walmart's application goes through every detail of how the blimp might receive, hold and dispatch drones; outlining various crane, catapult and landing bay ideas. However, the retailer describes how the blimp could be flown over to areas that require Wi-Fi, perhaps at festivals or concerts, which brings a very real physical embodiment of cloud-based storage to life.