Microsoft has really been pushing Bing since its release this past summer, and while it hasn't been able to put a dent in Google's search market dominance, it's sure been busy snatching away searches from other engines. Yahoo is the only search engine (besides Google) that has more maket share than Bing. Bing has continued to catalyze Yahoo's implosion and market share free fall, and analysts are saying that this trend should continue.

According to a chart on Gizmodo, not only will Bing continue to rise, it will likely catch Yahoo, in the US, by the end of the year. Microsoft has put a lot of money into advertising and towards toolbar deals, causing it to gain popularity. Yahoo has continued its decline for some time now and has agreed to let Bing power its search engine, as per their new arrangement. This will continue feeding into Yahoo's loss of market share, allowing it to be surpassed by Bing. Other, smaller, search engines (such as AOL) have also been losing market share to Bing, as well as Google.

With Microsoft's latest HP deal (announced at CES), Bing will only continue gaining market share. The young search engine will be the default browser in 42 countries (USA included, of course). Predictions by analysts that Bing will catch Yahoo by the end of the year don't seem so farfetched. Yahoo is falling fast. Bing is rising faster. It's simple, really. 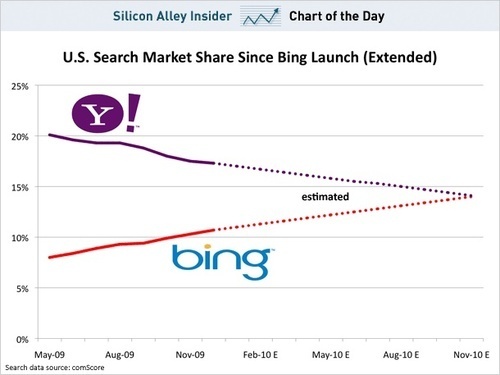