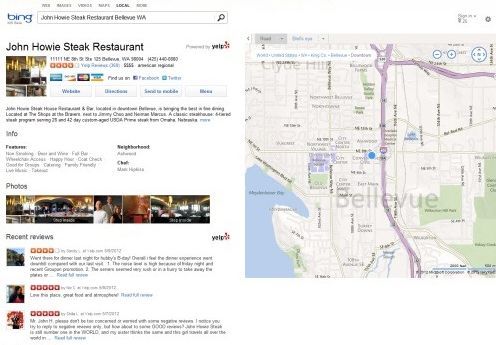 If you want to look up a restaurant in a city via Bing, you might now find that the search results will show up with reviews of that restaurant from Yelp. This week, Microsoft announced on its Bing blog that it is starting to incorporating reviews from the Yelp service.

Starting today, people in the US will begin seeing even more rich Yelp data in Bing’s snapshot (the center column) and relevant Bing Local pages allowing you to scan reviews at a glance or dive into rich content such as photos and restaurant reviews. With this increased integration, Bing can offer fresher and more reliable reviews so you can do more in your local area.

The blog post does not say when this new feature will be put into international versions of Bing.

Launched in 2004, Yelp has made its money mostly on user reviews for restaurants, hotels and other local businesses. It now has over 71 million monthly unique visitors and its user base has written over 27 million reviews; it became a publicly traded company in March.

This move by Microsoft seems similar to one made by Google when it incorporated reviews from the Zagat service in its search results; Google acquired Zagat in September.