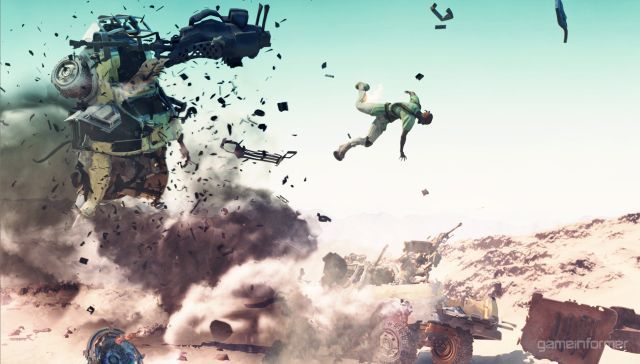 BioWare is one of Electronic Arts' most prolific game development studios. The Canadian division released Dragon Age 2 earlier this year and will release Mass Effect 3 in the first quarter of 2012. The Austin, Texas studio is prepping for the launch of the long awaited MMO Star Wars: The Old Republic on December 20.

Today, Game Informer's web site has posted up the first teaser image of an all new game franchise from BioWare. The image, seen above, seems on the surface to show an action-themed game in a desert setting with wreaked and/or exploding vehicles. It definitely resembles games such as Borderlands and the recently released Rage.

Of course, this image is from a game that's being developed by BioWare so we don't expect any cookie cutter game design for this new franchise. BioWare's previous games have all had some kind of role play elements so we suspect that this new game will have an RPG design as well. BioWare's games are also typically strong on the storyline front and are not afraid to "go there" in terms of dealing with mature themes.

The game will get its first real reveal on December 10 when a trailer is shown during the Spike TV Video Game Awards. While we have seen images like the one above in other games, we know that there has to be much more to this BioWare title than a simple car combat game.