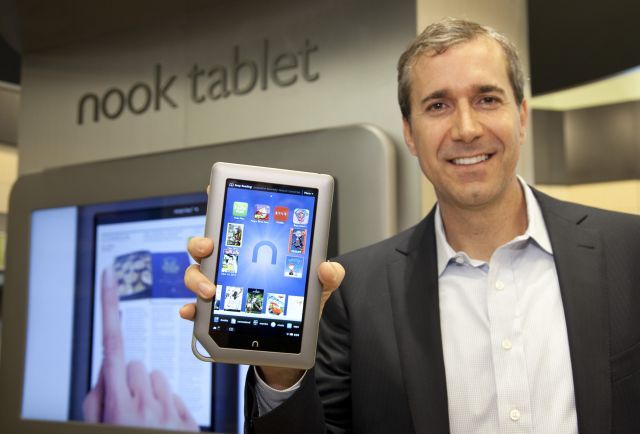 Barnes and Noble is going after Amazon's Kindle Fire with both barrels today. The book seller has officially confirmed what was leaked out last week. It will begin selling the new Nook Tablet device in its stores on November 17th for $249. The current Nook Color eReader gets a $50 price cut to $199 while the Nook Simple Touch eReader gets a small revamp and a price of $99.

Priced $50 more than the Kindle Fire, the seven inch Nook Tablet will still compare well with Amazon's device, especially in terms of storage. The Nook Tablet will have 16 GB in its internal memory for storage and can be expanded with up to 32 GB of extra space via the SD card slot. The Kindle Fire has only 8 GB of storage with no expansion slot. In addition to serving as an eReader, the Nook Tablet can stream video and music from services like Netflix, Hulu Plus and Pandora. eBooks can also be stored on the Nook Cloud server service.

As we mentioned the older Nook Color gets a price cut to $199 but also gets some expanded features including support for Netflix and Hulu Plus. Finally, the $99 Nook Simple Touch eReader reportedly has the brightest E Ink screen of any similar device. It also doesn't run any ads unlike some of the models of Amazon's Kindle eReader.

On the surface it looks like the new Nook Tablet will be able to go toe to toe with Amazon's Kindle Fire even with the Nook Tablet's more expensive price tag. It will be interesting to see how many of these tablets will be sold between these two rival retailers.

Image via Barnes and Noble