It’s no secret that BlackBerry has been struggling in recent years. IDC predicts that by the end of this year, its global share of the smartphone market will fall to just 0.8%, dropping even further to 0.3% by 2018. The company's own CEO admitted that its latest BlackBerry 10 operating system isn't exactly intuitive, and twice in the last year, BlackBerry has had to remind the world that it's not dead yet.

And yet, despite its CEO, John Chen, publicly admitting that the company has "a lot of problems", BlackBerry today placed at least some of the blame for its woes on its competitors and on the media.

On its blog today, the company said that "there have been many vocal voices from competitors trying to incite fear, uncertainty and doubt about BlackBerry. In doing so," it added, "sensationalized reports surrounding our viability and misperceptions about our product portfolio have crowded the airwaves."

To counter the effects of this, BlackBerry says that it "must fight back", and to that end it has launched its Fact Check Portal, describing it as "a place for us to hold our competitors accountable for what they say, when what they say is wrong", and promising to deliver "the real story" about its products and services.

It adds: "We'll provide evidence that BlackBerry continues to be a leader in mobile, and we'll expose 'smoke and mirrors' marketing tactics by competitors." So far, however, the Fact Check Portal is empty (apart from a link to the blog post announcing it); given how much its rivals are supposedly talking trash about it, and all of these "sensationalized reports" by the media, it's perhaps a little surprising that the company hasn't prepared a single example for its launch. 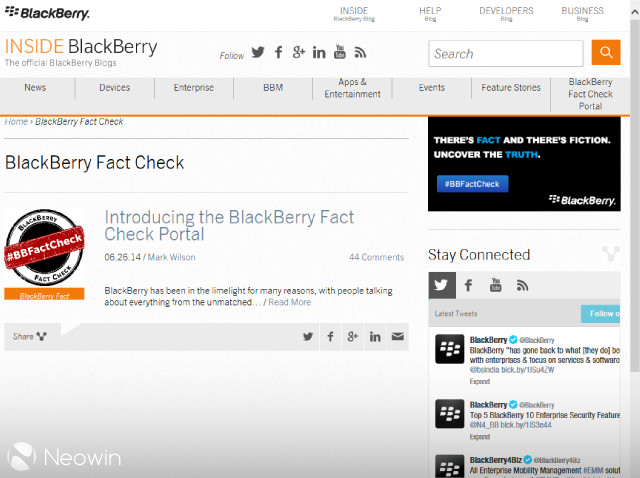 Still, BlackBerry tells its users and supporters that if they "see a work of fiction from one of our competitors, we want to hear about it", so perhaps we'll be seeing some of these examples in the weeks and months ahead.