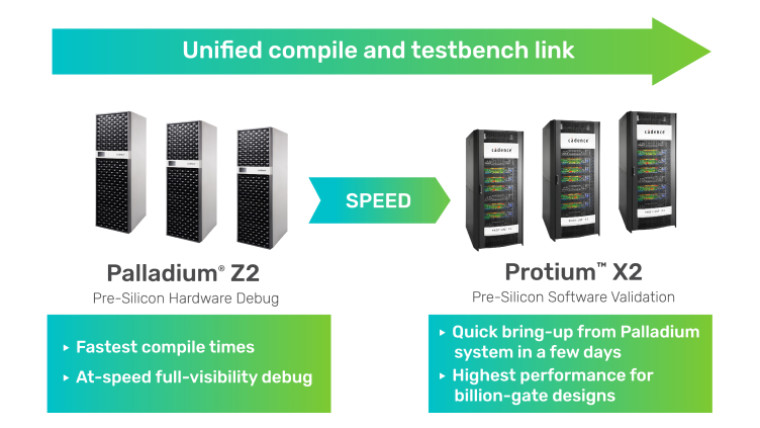 Cadence has unveiled its latest Palladium Z2 and Protium X2 systems which claim to offer twice the capacity and 1.5X the performance over the last-gen Z1 and X1 systems. For those who don't know, the company provides framework and tool-set for various hardware and software companies to do large-scale testing and validation of products before they are sent off for fabrication. The Palladium and Protium lineup from Cadence, dubbed the "dynamic duo" by the company, provides pre-silicon hardware debugging and pre-silicon software validation, respectively, for hardware companies like Nvidia or AMD, and is part of the Cadence Verification Suite of tools that it provides.

The Palladium Z2 hardware emulation systems will be based on a new unspecified "custom emulation processor", while the Protium X2 prototyping systems will utilize Xilinx's Virtex UltraScale+™ VU19P FPGAs.

The key performance aspects and features of the two systems have been listed below:

The general availability of the new Palladium Z2 and Protium X2 systems is slated for Q2 of this year however the company says that it has already started deploying the platforms at select customers. To know more about these systems, you can visit this page on the official Candence website.