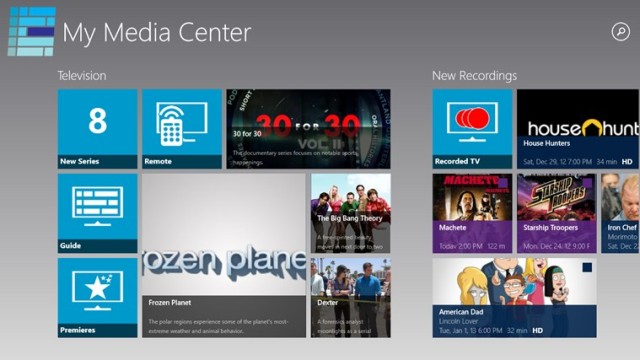 Ceton is best known for its Windows Media Extender PC hardware and software, including its many mobile apps. Until this week, those apps have been under the Ceton Companion brand but that has now changed. The iOS, Android, Nook, Amazon and Windows Phone apps are now referred to as My Media Center.

In addition to the rebranding of its older apps, Ceton has now launched a new Windows 8 My Media Center app. It's now available in the Windows Store for $4.99 (yes, it also supports Windows RT products).  The app does require a PC to run Windows Media Center and Ceton's My Media Center Services for Windows 7 or 8 to operate. Also, the PC should have some kind of TV tuner.

While My Media Center for Windows 8 does not yet support streaming live or recorded media content, it does allow Windows 8/RT tablets or convertibles to control an HTPC so they can watch recorded TV shows, scheduled new shows to be recorded and more. The app supports many Windows 8 Modern UI features, including Live Tiles, semantic zoom for browsing though the recorded TV shows, snap view for using two Windows 8 apps at once, support for the share and search charms and more.