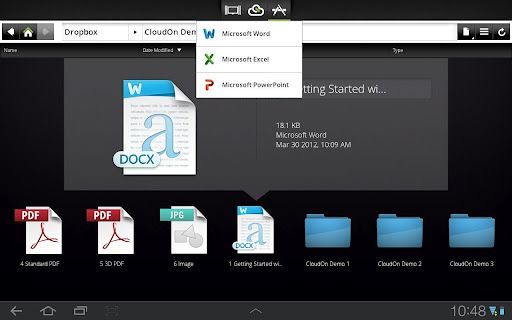 In April, CloudOn launched the 2.0 version of its iPad app, allowing those tablet users to access and use Microsoft Office programs and files via CloudOn's cloud-based servers. Now the company has expanded its reach to include Android-based tablets. The Android CloudOn App is now available to download via Google Play.

Like the iPad app, the Android version lets users edit, save and share Word, Excel, and PowerPoint documents via its own interface. The Android version can also manage those documents with your Box, Dropbox or Google Drive cloud storage accounts. It has support for reading PDF files along with an image viewer to check out pictures in various formats; you can also share those files with your contacts via email.

The app is for Android 3.0 and above so all those smartphones with Android 2.2 and 2.3 installed are out of luck, at least for now. Another company that offers a similar Microsoft Office streaming solution for tablets is OnLive. It has already released support for the iPad and some Android tablets. Unlike CloudOn, Onlive Desktop also offers a way to get access to a cloud based version of Internet Explorer 9 via those platforms and at super-fast speeds for an extra monthly fee.