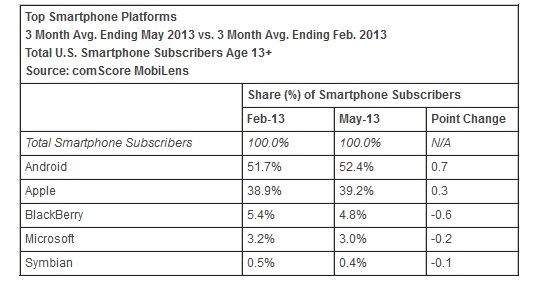 The research firm ComScore apparently decided to push out their latest US smartphone market share numbers for May 2013 a bit earlier than normal. The firm previously revealed their April 2013 data in the first week of June. Late on Friday, the three month numbers that ended in May showed a dip in Microsoft's smartphone market share.

The May 2013 online survey numbers show that Microsoft's share of the US smartphone market stood at 3.0 percent, down from 3.2 percent in February. The same numbers show Android leading as usual with 52.4 percent, up 0.7 percent. Apple's iOS platform is second with 39.2 percent, up 0.3 percent.

BlackBerry continues to lose market share at a faster pace. ComScore says that its survey numbers have BlackBerry at 4.8 percent, down 0.6 percent from February. BlackBerry reported lower than expected sales of its BlackBerry 10 smartphones on Friday that caused its stock price to plummet 27 percent in trading.

ComScore says their latest numbers show that 141 million people in the U.S. own a smartphone. Apple still is the single biggest smartphone maker in the US with 39.2 percent, followed by Samsung with 23 percent, HTC with 8.7 percent, Motorola with 7.8 percent and LG with 6.7 percent.