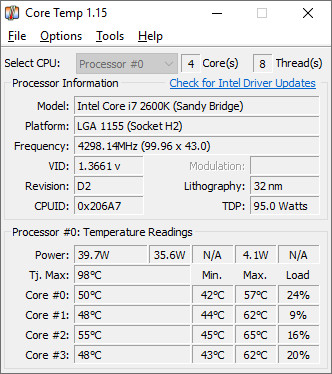 Core Temp is a useful tool that will help monitor your PCs CPU temperature. What makes Core Temp unique is the way it works. It is capable of displaying a temperature of each individual core of every processor in your system! You can see temperature fluctuations in real time with varying workloads. Core Temp is also motherboard agnostic.

Core Temp is easy to use, while also enabling a high level of customization and expandability.
Core Temp provides a platform for plug-ins, which allows developers to add new features and extend its functionality.