If you've spent any reasonable length of time on the internet you'll have heard of sites offering access to television shows and movies for free. Some of these sites are big names in their 'industry', if you can call it that, offering downloads or streams of video. If you don't mind breaking the law to access the content then you may have used one of these sites. In fact, in the UK you can get away with running a site allowing access to videos as long as you're only providing links. Or you could, in the past, when the law was clearer. Sites that did this in the UK in the past were able to get away with it. Anton Vickerman's SurftheChannel, or 'STC' as it was known, is being treated differently.

SurftheChannel has been found guilty of copyright infringement in the United Kingdom. Other sites in the past have went through the process were determined to be in the clear, though obviously these decisions are difficult to make concerning sites like this. By their very nature these sites are designed to operate in the grayest area possible. They do not host the videos or anything relating to them. Instead, they only provide links so you can choose to do what you want with them. Elsewhere in the world the law relating to this makes more sense, but in the UK it is surprisingly confusing.

Vickerman is currently in court, and could face up to ten years in prison if convicted for copyright infringement. It would seem that copyright infringement is going to become a primary focus in the UK, with these laws being changed or simplified to speed the process up. However, Vickerman's trial has been plagued by downright questionable choices made by the prosecutors. This is based on information posted by an anonymous blogger, but it contains information so specific to Vickerman's case you could trust it a little. Obviously it's the sort of thing you wouldn't put complete faith in, but all the same, the content shared is definitely worth a read.

Vickerman's arrest was an interesting way to close down a website. His offices were raided by a group called FACT without police knowledge. They had been investigating him independently, and his offices were raided by a group with no real legal authority outside of a courtroom. The group posed as potential home-buyers to gain access to Vickerman's home so they could get an understanding of his own living space. They got in touch with his ISP, claiming Vickerman was selling counterfeited DVDs in an attempt to get information about him. Then they gave up on logic and started debating whether he was wearing a false beard. 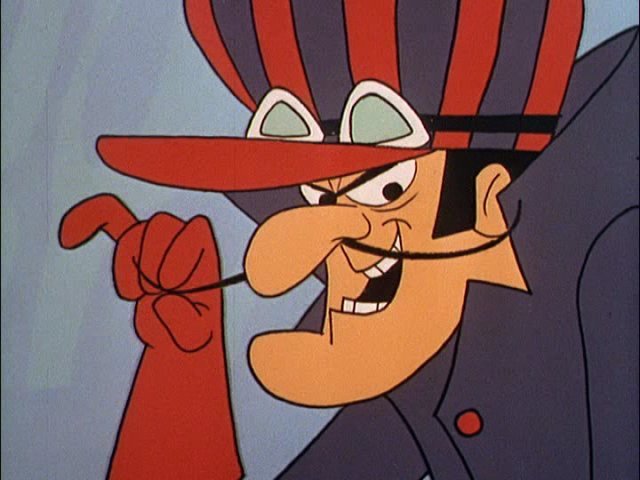 An idea even Dick Dastardly couldn't get behind.

The 'false beard' investigation would have been downright hilarious to see discussed in court, but the FACT agents had managed to 'lose' the log book. When you're gathering information for a court case, make sure you have somewhere that you can lose it easily. Always good advice.

Another contributor to SurftheChannel has gone rogue. a man by the name of Brendan admitted offering to bring the site "to its knees", to use his own explanation, for the highest bidder. Brendan faced charges in the United States, and testified in exchange for immunity. He is the defense's star witness, and he couldn't have damaged his own case any more if he hadn't admitted the MPAA offered him employment after he agreed to prosecute the Vickermans. Why did he admit it? Nobody has any clue, and the prosecution are probably kicking themselves for letting him.

The story gets even more confusing though when an MPAA executive tried to act as an investor in the site. Don't think too hard about that. He tried to act as an investor in a site which would be undermining his day-job. A&E and Discovery, two television networks, had deals with SurftheChannel. Oddly enough they don't now, and haven't had since the MPAA got involved in the case. This has led to discussion of whether the MPAA bullied these networks into withdrawing their deal. Here is where Vickerman raises two points himself:

If Vickerman is right then he might have just broken the prosecution's case. BlinkX no longer lists any infringing links it seems, and you have to wonder what arrangement they came to with the MPAA if Vickerman is right. What pay-off would you take for having to kill your own site to take out your primary competitor? Even with all these points and counter-points there is a chance Vickerman will serve time in jail, for "conspiracy to commit fraud". "Conspiracy to" is the definitive one-size-fits-all argument. If you don't have any other argument, then the accused party was clearly conspiring to do something. Under UK law it seems SurftheChannel broke no laws. But you can't prosecute FACT either, even when there is evidence to show they've breached laws in the pursuit of SurftheChannel.

It's a confusing system, not to mention flawed, but it could become more common if other sites similar to StC are found in the UK. Now all we can do is follow the court case with Vickerman and Brendan to find out what happens next.