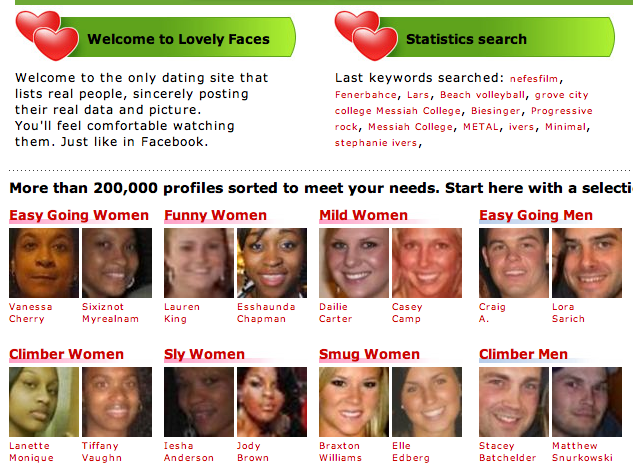 How do you launch a dating website with 250,000 members on the first day? That's a question Wired asked, and they came to the conclusion that the site founders who launched Lovely-Faces.com this week, with profiles — names, locations and photos were scraped from publicly accessible Facebook pages. The site categorizes these "volunteers" into personality types, using a facial recognition algorithm, so you can search for someone in your general area who is “easy going,” “smug” or “sly.”

Or, you can search for people using their real names.

So how did they do it? Paolo Cirio, a media artist, and Alessandro Ludovic, media critic and editor in chief of Neural magazine, explained the concept on a specially created website:

Through special custom software we collected data from more than 1,000,000 Facebook users. What we collected is their "public data" - some of their personal data (name, country, Facebook groups they subscribe to) plus their main profile picture and a few friend relationships.

“Scraping people’s information violates our terms,” said Barry Schnitt, Facebook’s director of policy communications. “We have taken, and will continue to take, aggressive legal action against organizations that violate these terms. We’re investigating this site and will take appropriate action.”

Cirio and Ludovic say they will remove a user’s profile, if a person asks, and the site doesn’t have any indication they are actually trying to make any money. Instead, it’s part of a series of prank sites, the first two of which aimed at Google and Amazon, intended to make people think more about data in the age of internet behemoths.

They do prove a point, it's almost laughable that Facebook is angry about someone doing exactly the same thing to make ends meet. Zuckerberg initially started out by creating FaceMash, a website that compared coeds by scraping user details off school servers, and allowing visitors to vote for the better looking one.