I've always been a fan of Dell's XPS 15. Frankly, there aren't a lot of portable PCs out there that use Intel's H-series processors that aren't branded as gaming PCs or workstations. This is still more along the lines of an ultrabook, but with a lot of power to back it up.

The model that Dell sent me includes a Core i9-8950HK processor, 32GB RAM, an Nvidia GeForce GTX 1050Ti GPU, and a 15.6-inch 4K HDR display. It's a dream to use and it probably has all of the power you need and then some.

The design of the Dell XPS 15 is exactly the same as it was in the model I reviewed last year, and I'm not sure if that's a good thing or a bad thing. There are features that other XPS laptops have now that this does not, and I was explicitly told that that's because this machine is a refresh, not a redesign.

One of those is no IR camera for facial recognition, something that you'll now find on the XPS 13, XPS 13 2-in-1, and the XPS 15 2-in-1, all devices that were released prior to the current XPS 15. This device does have a fingerprint reader in the power button to the top-right of the keyboard. 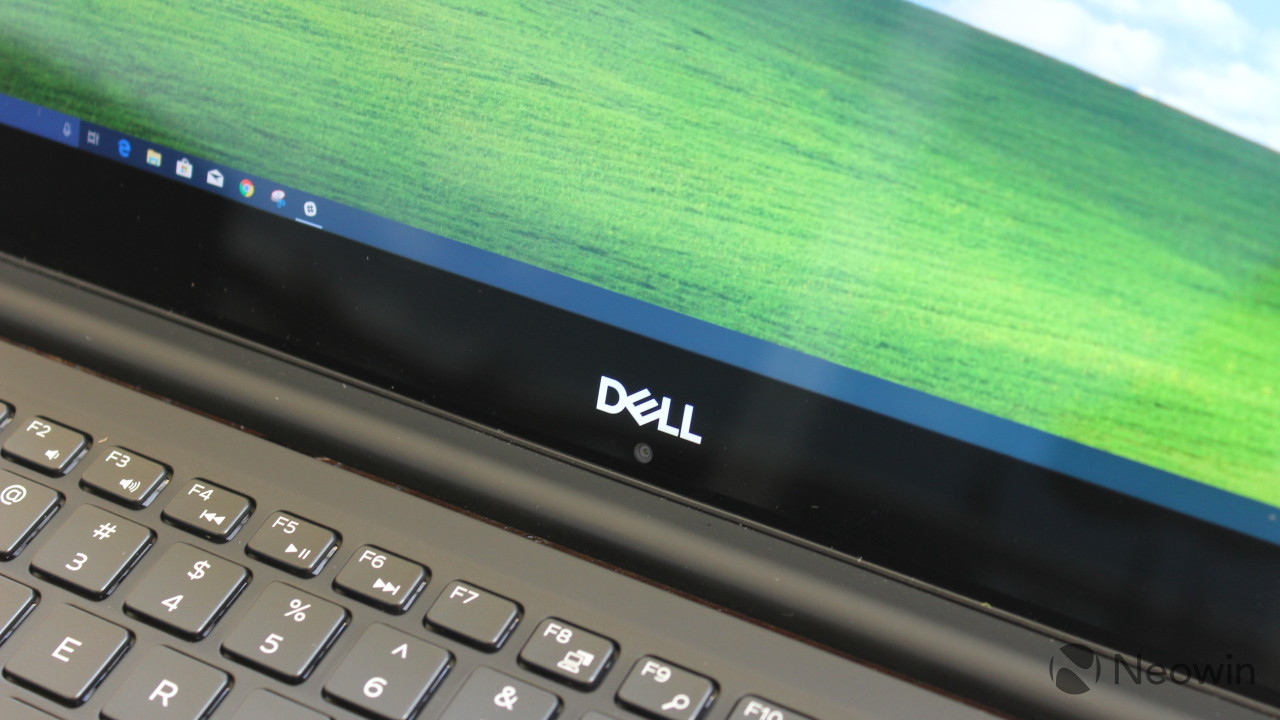 Another thing that bugged me is that it still uses a 130W barrel charger, while the XPS 15 2-in-1 ships with a USB Type-C charger with the same wattage. You can use the Thunderbolt 3 port on the XPS 15 for charging, and the XPS 15 2-in-1 charger works just fine with this. I just think that in 2018, we should be able to use one cable for charging all of our devices.

But if a redesign means taking on all of the features of the XPS 15 2-in-1, I'm happy that Dell left it as is. While I really loved the power and portability that comes with Intel's Kaby Lake G chips that have dedicated graphics on the die, the machine wasn't without compromises. The keyboard was really shallow and it took a while to get used to, and the laptop only had four USB Type-C ports. The clamshell XPS 15 maintains the full range of ports that it's always had. 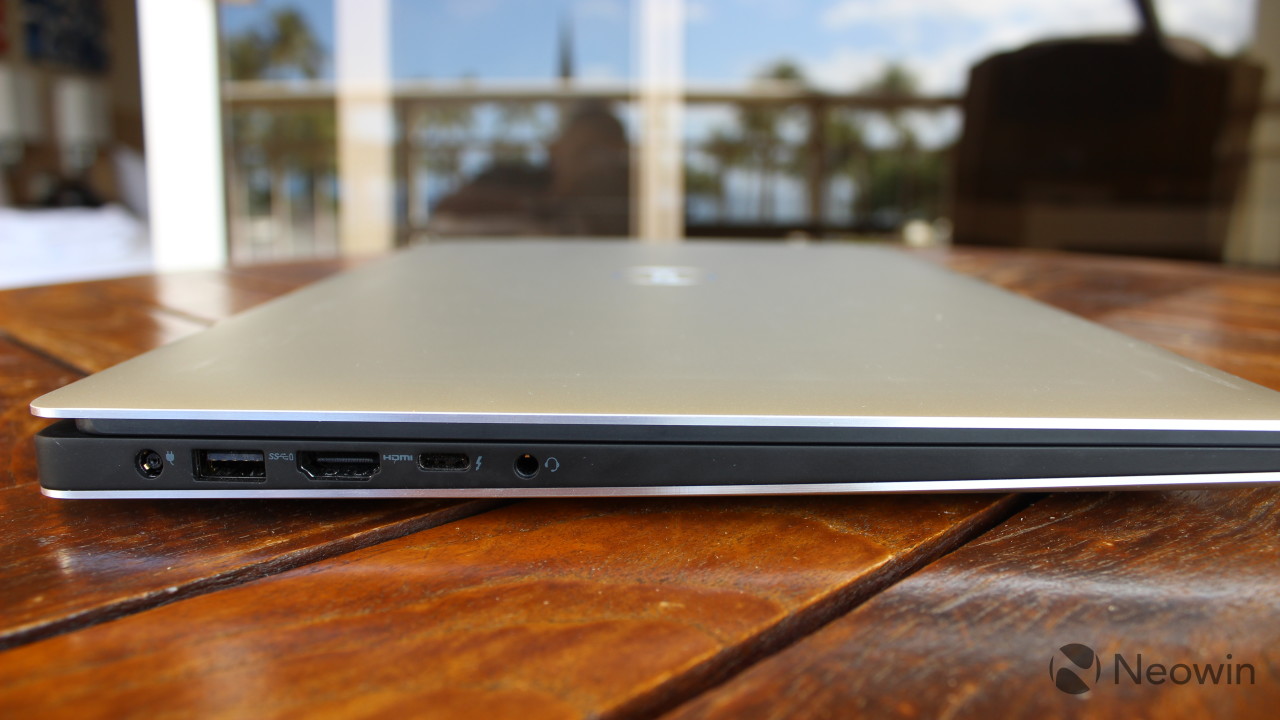 The left side of the device is where you'll find the charging port, along with USB 3.1 Gen 1 Type-A, HDMI 2.0, Thunderbolt 3, and the 3.5mm combo audio jack. The Thunderbolt 3 port can support a full 40Gbps data transfer and you can use it to power two 4K monitors or a single 5K monitor. HDMI 2.0 can also be used to support a 4K display. 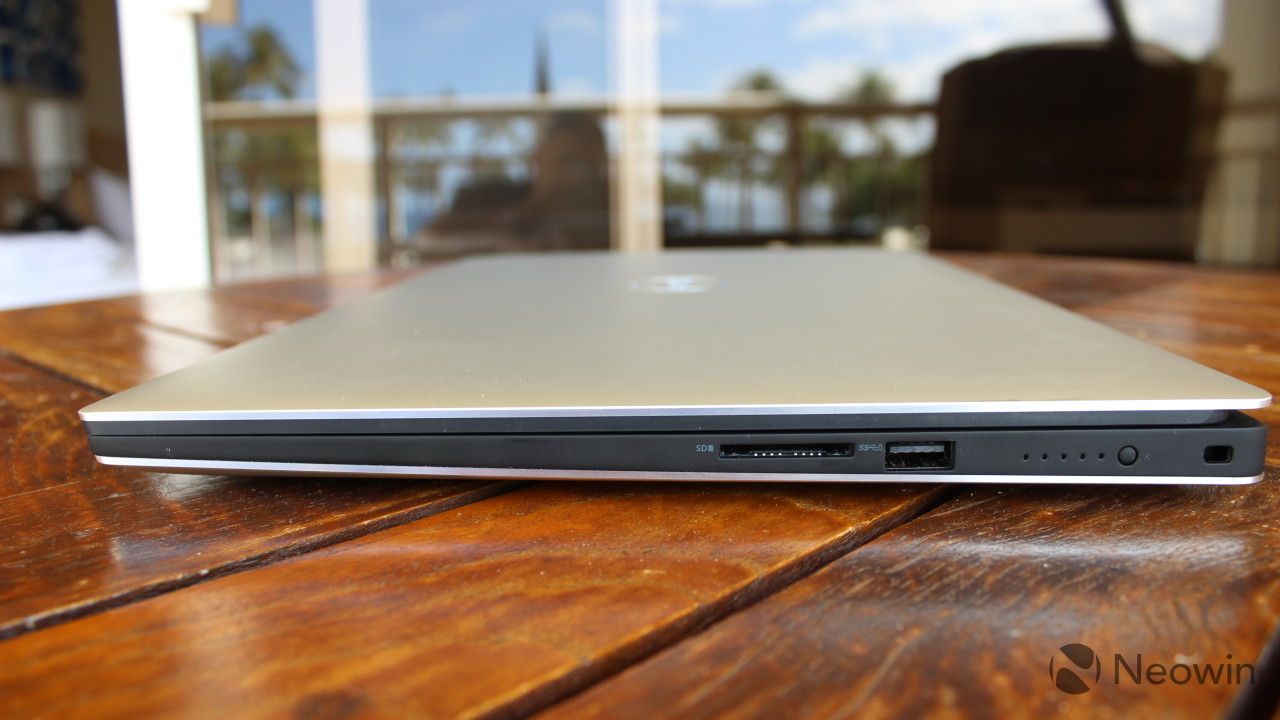 On the right side, there's a full-size SD card reader and another USB 3.1 Gen 1 Type-A port. There's also a battery life indicator with five LED lights. Just press the button and it will say how much battery is remaining. This is useful for when you're taking the device on the go and you want to see how much juice is left, especially since the battery life on this machine is not great, but I don't think it's useful for much else. It would be much more useful if it actually worked while the device is charging.

The XPS 15 uses a silver-colored aluminum shell, just as most XPS devices have, and it has a carbon fiber palm rest. The palm rest feels cool and soft to the touch, and it's quite comfortable to use.

The bottom of the laptop is also made of aluminum and it can be removed by taking out 10 Torx screws. There's also a flap on the bottom that when opened, will reveal information on the device, such as the serial number, the service tag, and so on.

Once again, Dell nailed it with the display. The model that the firm sent me includes a 15.6-inch 4K display, although it's also available in 1080p. You'll want the latter if you need better battery life. Remember, where battery life is concerned, the XPS 15 struggles because it has a 45W CPU, a powerful GPU, and a 4K display. 4K has four times as many pixels as 1080p, so that's a lot more power that it's using. 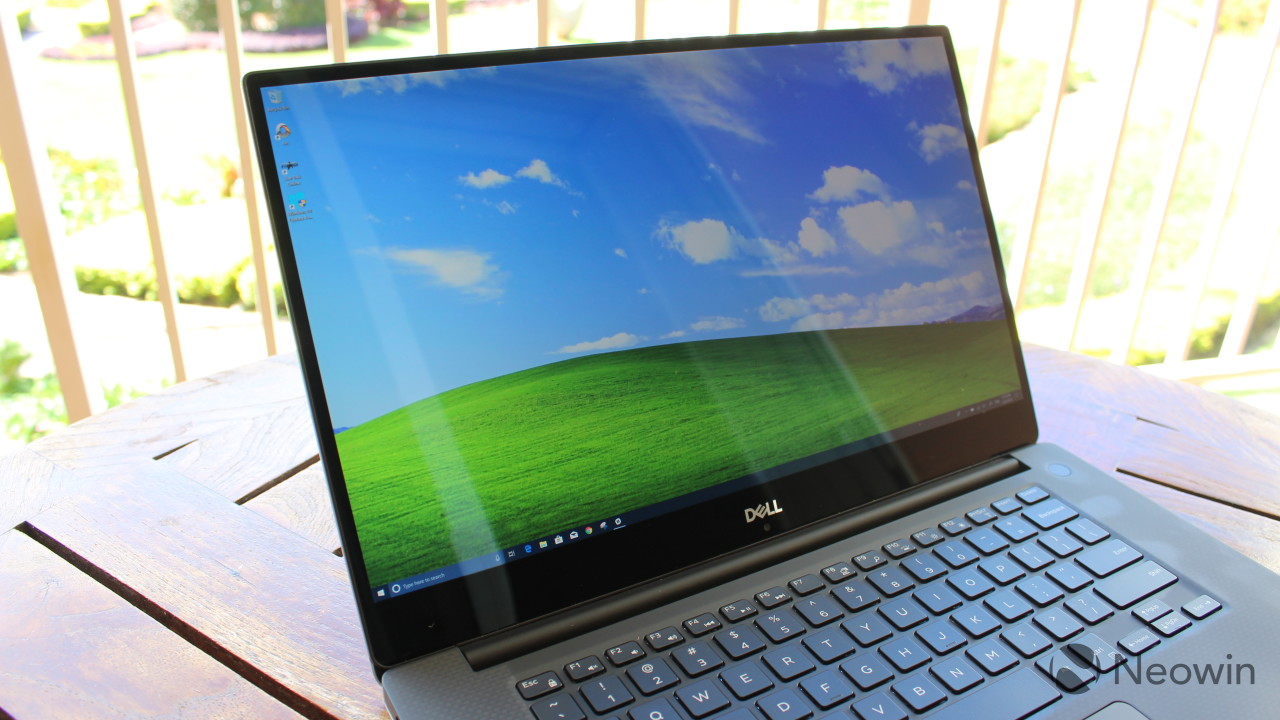 The screen is what Dell calls InfinityEdge, meaning that it has narrow bezels. It's meant to provide a more immersive experience, and it achieves that. My main complaint is that once again, it's using the same chassis as its predecessor and the XPS 15 2-in-1 actually has smaller bezels than this. The other complaint is that the webcam is still below the screen.

I've asked Dell why it puts the webcam below the display and the answer is simple. A more immersive experience is more important than the webcam. I was asked how often I use the webcam and when my answer was never, it was pretty clear. If you want proper webcam placement, you buy one of Dell's business products.

And then there's Dell Cinema, which is meant to increase the level of immersion from this device. For the screen, it's about CinemaColor. This means that it supports a variety of HDR formats, and the quality of the display is just better, with Dell promising "the deepest blacks, the most dazzling brights and more vivid detail across the entire color spectrum."

There's also CinemaSound, which makes use of Waves MaxxAudio Pro for sound clarity. And the third component of Dell Cinema is CinemaStream, which prioritizes your network for the content that you're streaming.

If you're looking for display quality, the XPS 15 is among the best you can do without going OLED.

One of the things that I appreciate about the lack of a redesign in the XPS 15 is that it has a full chiclet-style keyboard. On the XPS 15 2-in-1, Dell used what it called a MagLev keyboard, which used magnets to make it feel like a full keypress, but it really didn't work. That keyboard took some time to get used to, which was fine, except when you switched to another PC and back, you'd have to get used to it all over again. 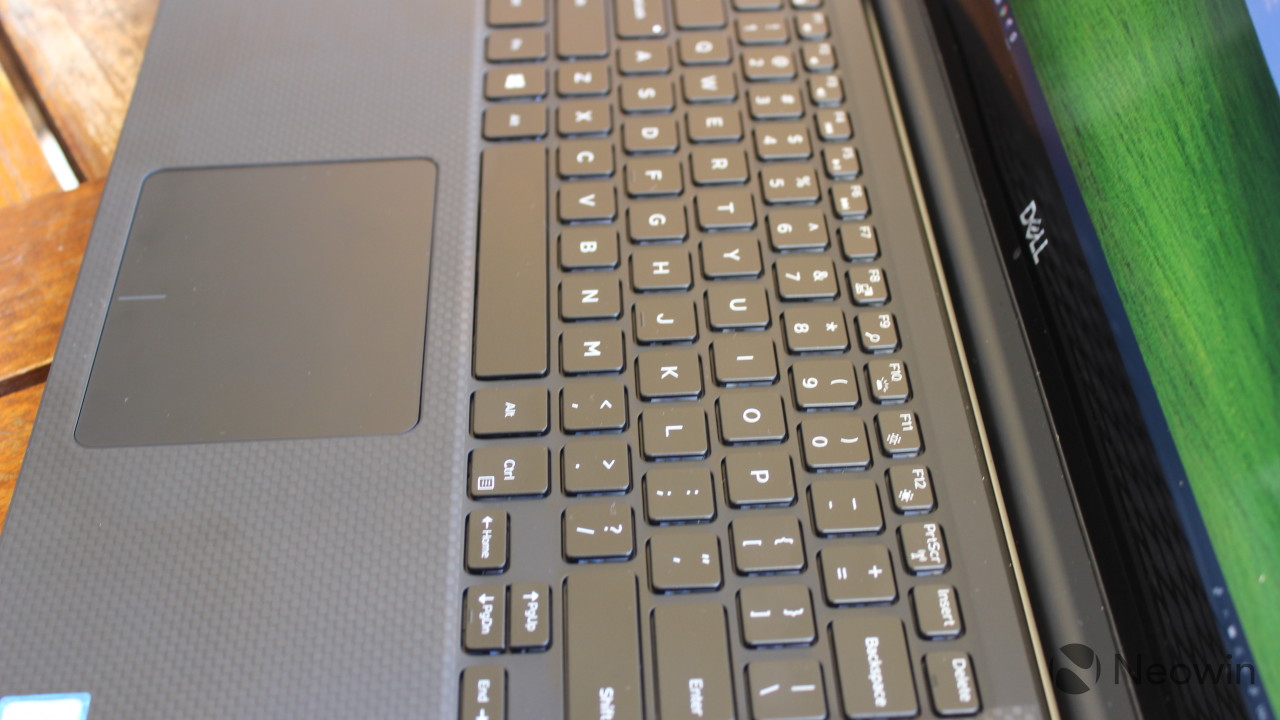 The keyboard is quite comfortable to type on, as most premium Windows 10 laptop keyboards are these days. It's backlit too, although the backlight does go off if you're not using it for a few seconds. The carbon fiber palm rest is a nice touch, and that's been a staple of the XPS lineup for some time.

The trackpad is large and clickable, which is always nice. It supports all of Windows 10's gestures, which is also appreciated. There's really nothing worse than using a new laptop that doesn't support touch gestures that you're used to. 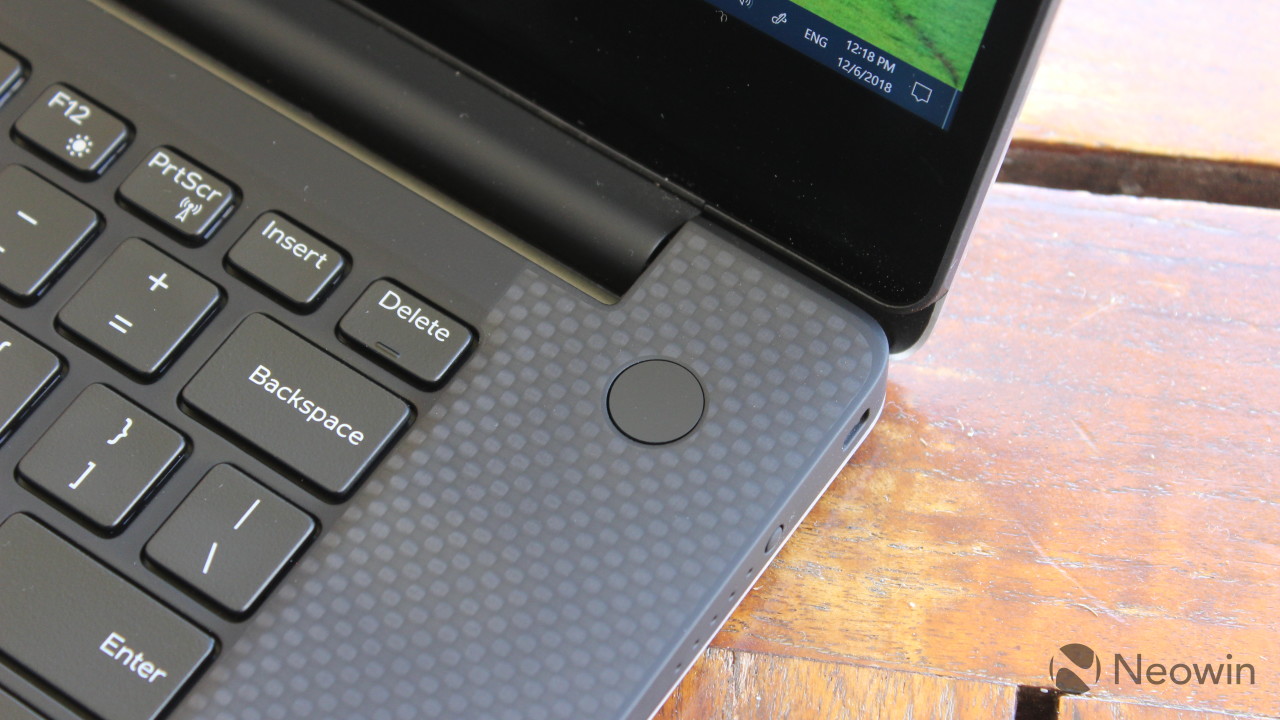 As usual, the Dell XPS 15 packs the best specs that you're going to find for its form factor. It has a Core i9-8950HK, something that's incredibly rare for a device that's not branded as being for gaming or as a workstation. The hexa-core chipset has a 45W TDP and it's unlocked for overclocking.

Of course, Dell's 15-inch XPS machines have always used Intel's H-series processors. Last year's XPS 15 used a seventh-generation Kaby Lake CPU, and the XPS 15 2-in-1 uses an eighth-generation Kaby Lake G chipset. So here's the difference. The Core i7 in last year's XPS 15 was quad-core, and of course, there was no Core i9 SKU. It wasn't a K-series chip either, meaning it wasn't unlocked. The eighth-generation chip in the XPS 15 2-in-1 is really the same CPU as a seventh-generation H-series processor; however, it includes a 4GB AMD GPU on the die.

So this year's processor is hexa-core and hyperthreaded, with a 12MB cache and a base clock speed of 2.9GHz and max turbo frequency of 4.8GHz. It's the most powerful mobile Core processor that Intel offers.

There's also the Nvidia GeForce GTX 1050Ti GPU, which is a mid-range graphics card. Really, anything above that will probably fall into the gaming category. Microsoft's 15-inch Surface Book 2 does have a GTX 1060 with 6GB GDDR5 memory, but that PC has a 15W U-series CPU. Note that Nvidia will be announcing its mobile RTX 20-series GPUs at CES this year, so the GTX series might seem dated in a few weeks.

As far as real-world performance goes, everything was a breeze. Mostly, I use PCs for typing articles, and of course, there were no issues there. But I also used the XPS 15 for editing video and for playing some games like Star Trek Online. Video editing went smoothly for 1080p 60fps footage, but 4K 60fps choked a little bit. As far as playing games goes, stick to more mainstream games. If you pull up Gears of War 4 and jack up the resolution and frame rate as much as you can, you'll run into trouble.

The XPS 15 is a powerhouse, but only in the limits of its form factor. A gaming laptop would serve you better for playing games, but it might weigh twice as much. The same goes with editing video and a workstation PC. What you're getting is the most power you can get in a 4.5-pound laptop.

For benchmarks, I used PCMark 8. First up is the Home test, which checks common tasks like web browsing, video chat, casual gaming, and so on.

The XPS 15 didn't perform quite as well on benchmarks as I would have thought, given the powerful CPU. Still, I suppose it lags behind gaming PCs due to the GPU. Next up is the Creative test, which checks more GPU-intensive tasks like mainstream gaming, video editing, and more.

This test is about where I'd expect it to be, better than 70% of results but still below gaming PCs that have more powerful GPUs. Finally, we have the Work test, which checks productivity-related tasks like writing and spreadsheets.

As you can see, the Work test does much better, and that's because this test is checking things that run on the CPU more. And yes, this is a powerful CPU.

I've always loved Dell's XPS 15 lineup, as I'm always willing to sacrifice battery life for more power. I'm never that far from a power outlet anyway. If that sounds like you, then the XPS 15 is your dream machine. 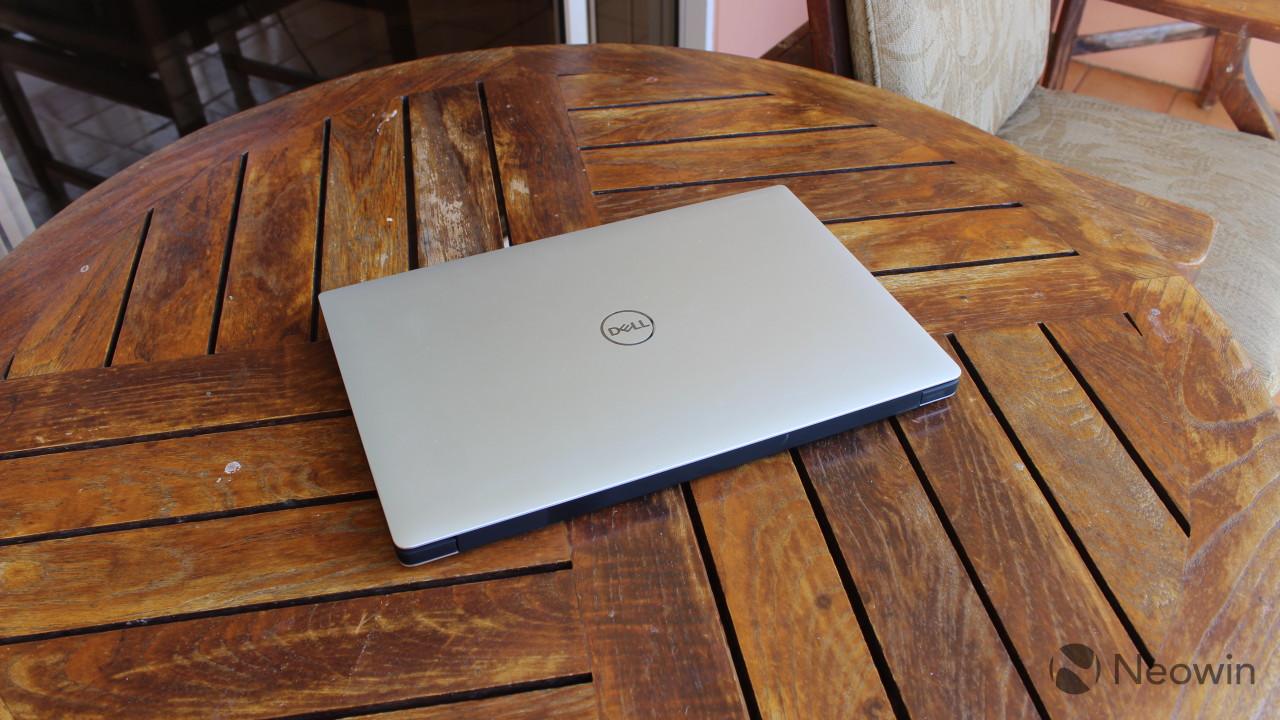 The biggest downside is that you're not getting some of the new features that we're seeing in other new XPS machines, like an IR camera for Windows Hello or the slimmer bezels that come with the XPS 15 2-in-1. I'm really looking forward to next year's XPS 15 to see if when these new features are included, if Dell also includes the things that aren't so great, like the MagLev keyboard.

But ultimately, this really is a fantastic machine. Aside from the obvious power, it also has an incredible consumption experience. Dell Cinema adds HDR to the stunning 4K display and the audio quality is phenomenal. For anything from editing video to watching video, the XPS 15 gets the job done, and it does it all in a 4.5-pound package.

You can check it out on Dell's website here.