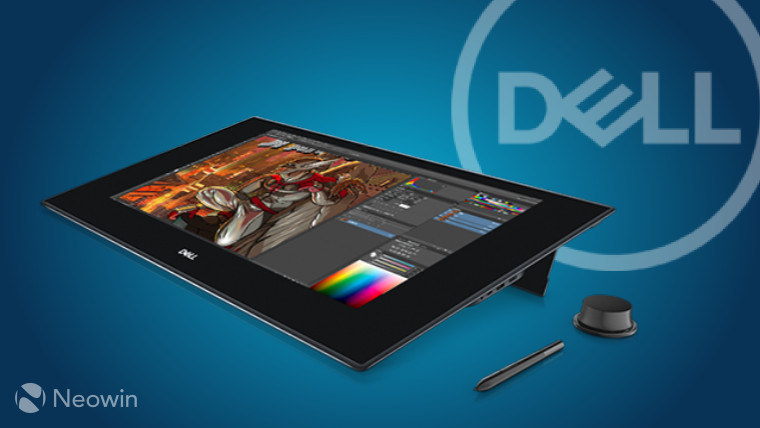 At CES 2017 back in January, Dell unveiled the Canvas 27, taking on Microsoft's Surface Studio with a slightly different approach. Unlike Microsoft's all-in-one PC, the Canvas is a standalone display that's designed to work "with any Windows 10 device", providing a larger creative workspace.

In fact, Dell envisaged the Canvas as being used in addition to the existing display on your PC, rather than replacing your current screen. But just like the Surface Studio, the Canvas has its own pressure-sensitive pen, allowing users to draw directly onto the 27-inch Quad HD (2560x1440px) display, which is protected by Corning Gorilla Glass.

The Canvas also comes with its own take on Microsoft's Surface Dial, known as the totem. Dell explained how the Canvas, pen and totem can all come together to improve the creative process:

Become more immersed in your work. Sketch with the pen in one hand and use the totem in the other to simultaneously interact with menus and presets.

Fast and convenient: The screen recognizes a pattern of touchpoints on the bottom of the totem, enabling menus to quickly appear for easy selection.

Work with your hands: Use totem to engage your software menus. With a turn of the wrist, you can activate line weight or color. You can personalize your creative experience even more with an optional second totem.​

Made for comfort: Position the totem in your field of vision and where your hand rests naturally on the screen so you can access software menus comfortably and without creative interruptions.

As with Microsoft's rotary input device on the Surface Studio, the totem can be used on the Canvas, offering an alternative way to interact with supported software. "Dell Canvas features new, specialized software programs designed to improve your workflow," the company said. "Quickly learn the functionality of each with Dell Canvas Connect, an application that makes set up easy so you can start creating right out of the box."

Among the software that offers specific support for the Canvas 27 is a new version of Stardock Fences. Stardock worked with Dell to reimagine Fences for the Canvas, enabling users to better organize their files, folders and icons, giving them more control over their creative workspace, and helping to improve their workflow.

The Canvas can also be raised up to 10 degrees to make drawing and writing on it a bit more comfortable. However, if you want to raise it further - up to 80 degrees - you'll have to purchase an optional stand, priced at $499.

The Dell Canvas 27 is available to buy now in the United States, priced at $1,799. Dell strongly recommends using the Canvas with a PC running the Windows 10 Creators Update, if you want to "take full advantage of the creative potential that this new digital workspace offers."

Make sure you check out our hands-on preview of the Dell Canvas if you're thinking of buying one.