There’s something of a running joke in journalism which, in a nutshell, states that if you report a rumour often enough, it will eventually become reality. It’s a take on the old adage that the great lie oft-repeated ultimately becomes the truth.

When it comes to Apple’s much-hyped (and still entirely mythical) new television set, often referred to as the ‘iTV’, it seems that we’re currently in the nebulous zone between pure fiction and proven fact. There’s nothing to conclusively indicate that Apple is definitely working on its own TVs – although there are some clues which, if properly arranged, appear to support the idea – but it’s the frequency of rumours and hearsay that are really keeping the dream alive.

The latest addition to the rumour mill is a juicy one. Cult of Mac has a source who claims to have seen a prototype of the new Apple HDTV in the flesh and in action, and has published details revealed by this person who has, of course, chosen to remain “strictly anonymous”. Take this info with a scoop of salt, therefore, and try not to be too disappointed if some – or all – of it turns out to be a load of old sh- nonsense.

The source, we are told, likens the device to Apple’s current LED-backlit Cinema Displays: “It resembled an Apple monitor, only much larger.” An integrated iSight camera is no surprise, bringing with it the promise of free FaceTime calls to other Apple device users. The camera reportedly includes facial recognition, along with face track-and-zoom capabilities that can follow a user moving around the room. 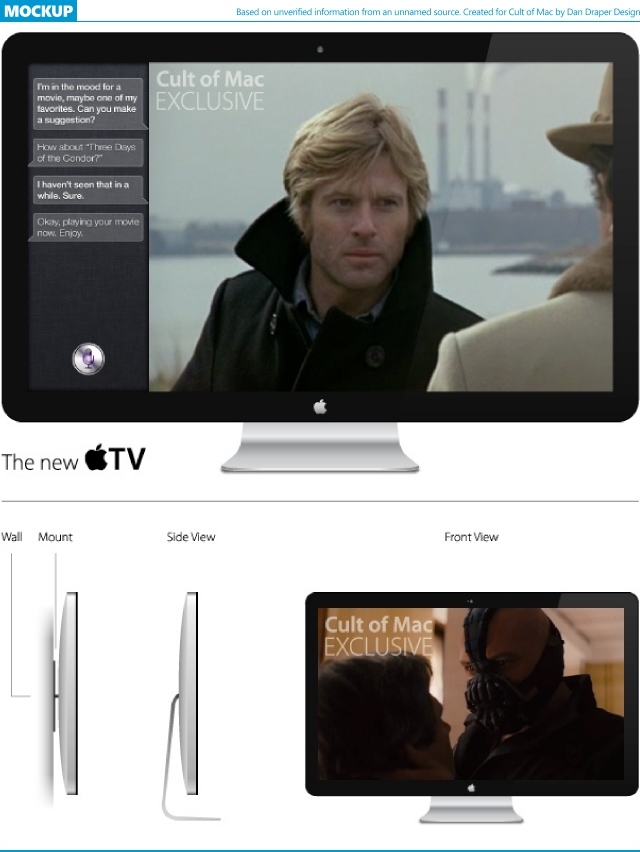 Siri voice interaction is another feature unlikely to raise eyebrows. The source claimed that Apple “used Siri to make a FaceTime call”; no further details were given on Siri’s capabilities, but it’s unlikely that Apple would limit voice interaction to that one feature. Expect to be able to perform the same range of tasks, if not more, that one could complete with Siri on an iPhone 4S.

So, there we go. There’s nothing particularly unbelievable here, and Cult of Mac’s source is apparently “well-placed and has provided [them] with great tips in the past”, but until we get some official info, this remains the stuff of rumour, legend and hearsay.

But if we keep reporting it, maybe it’ll eventually come true... Hey, it worked with the iPad.


MAKE SURE YOU ALSO CHECK OUT...

> Editorial: The future of TV might just be Apple-shaped
> Analyst predicts 2014 launch for Apple television