In 1996, V_Graph approached Microsoft with a product that they called ‘Web Widgets’, which was able to incorporate web content within applications. Microsoft ultimately did not formalise a deal with V_Graph and declined to use their product in the development of its next web browser.

But, as VentureBeat reports, when Microsoft launched Internet Explorer 3.0 a few months later, it featured similar technology to that of V_Graph. The former head of V_Graph, Rob Morris, has now accused Microsoft of having “appropriated” the company’s technology, which he says resulted in the demise of his business. 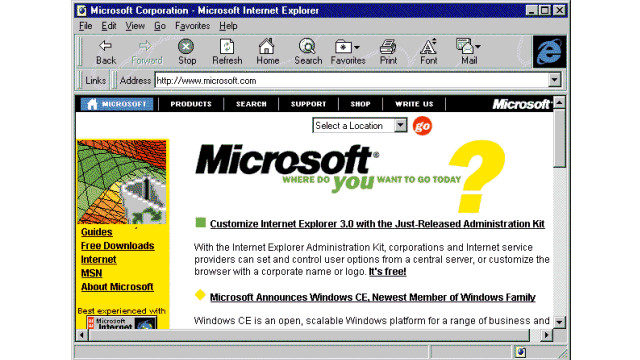 Microsoft was awarded a patent, which it filed in 1997, for "a web browser control for incorporating web browser functionality into application programs", and today it is one of numerous patents from which the company earns licensing fees for its use on Android devices.

Morris claims that the technology helped Microsoft to defeat Netscape Navigator in the ‘browser wars’ of the 1990s, and that it also enabled the company to argue that Internet Explorer was a separate component from the Windows operating system during antitrust trials. He said that he “didn’t think they’d actually get a patent on it, because for a patent you need something novel, and we’d been selling it already for well over a year.”

More than simply complaining, though, Morris is planning to take action, seeking to get the patent overturned before it expires in 2017. "We did not act until now because my little company was basically extinguished by this whole experience," he says. "However, now with the ability to do crowdfunding, it is finally possible to try." 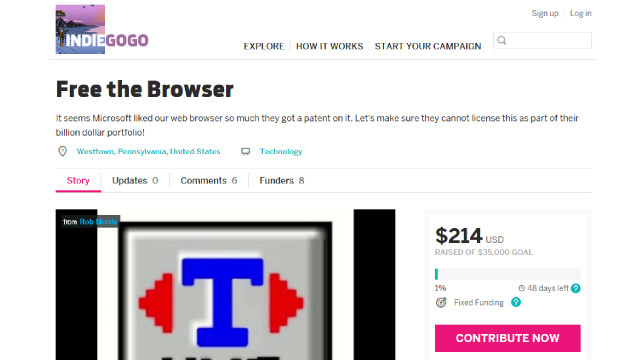 The 'Free the Browser' campaign aims to raise $35,000 to fight the patent

He has established an Indiegogo campaign called 'Free the Browser', which he says intends "to fight [Microsoft's] bad browser patent" and "to stop them charging for this. Right now, for example, they collect billions of dollars from Android users, with their patent portfolio licensing machine."

He initially hopes to raise $35,000 to file an objection with the US Patent Office, but if he succeeds in raising $250,000, he says he will be able to make the case in person, "to object and to stay in the fight and counter Microsoft's arguments." At time of publication, the campaign had raised $214 in the six days since its launch.

He claims that "this bad patent currently affects every smart phone and tablet user in America today. It was annoying when Microsoft started giving this technology away as part of their operating system, but that only hurt my company. Now, they are making billions licensing their patent portfolio, and it makes us mad to think they are charging Android users for this."