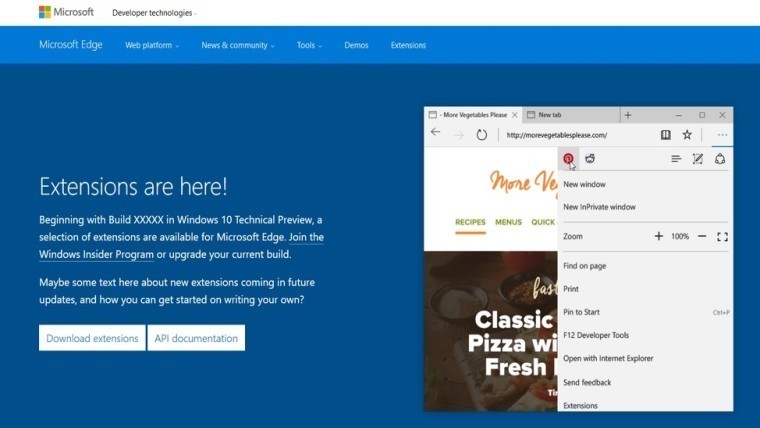 Microsoft fans have been waiting a long time for the company to fulfill its promise of bringing extension support to the new browser it unveiled alongside Windows 10. That wait, it seems, may finally be coming to an end as multiple reports indicate that the next build of Windows may very well come with the feature enabled.

As such, many might be curious as to offerings on display at the moment. As it stands, the leaked downloads page for extensions lists three simple add-ons, but the store may very well explode once the feature is made public. Microsoft has made a big deal of how similar its extension infrastructure is to Chrome's, and how easy it would be for developers to port their existing products to Microsoft's own browser. And, it seems that might be very true, indeed, as a developer showed recently.

Following the leak, Bavo Luysterborg was able to extract the code for the Edge extensions currently available, and by making only a few changes to the code was able to run them on Chrome. Now, it's not a guarantee that the same will be true of working backwards - i.e. porting a Chrome extension to Edge - but, as he puts it, the source code for the Edge extensions is almost identical to their Chrome counterparts with only a few changes to the manifest.json file and, of course, changing the name from 'chrome' to 'msBrowser'.

While Microsoft may have opted out of leveraging Google's significantly larger store on the mobile front, it is banking its browser ambitions on doing the same for Edge. If the above is anything to go by, Microsoft has certainly done its part. All that's left is for developers to chime in. Let's hope they do.