A new Nokia Lumia 900 advertisement may have inadvertently revealed some new live tile features on Windows Phone, or it may simply be a Photoshop job gone wrong.

The advertisement, found by WPCentral, shows some minor but distinct differences from the current functionality of live tiles in Windows Phone. Two issues stick out: first, the "Photos" hub tile flips up and splits into two tiles, the first of which shows the latest photo and the second shows a photo count; secondly, the "Contacts" tile flips up to list a specific event, "Meet up with Sarah." As WPCentral points out, the live tiles found in the current version of Windows Phone, Tango, don't have these features. 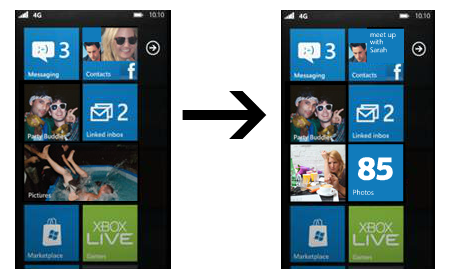 Microsoft will be showing off the next version of Windows Phone, Windows Phone 8 (codenamed Apollo), at the Windows Phone Developer Summit next month on June 20 and 21. Many new features of the platform update have already been revealed by Joe Belfiore, Microsoft vice president and Windows Phone product manager. The new operating system is expected to launch before the end of the year.