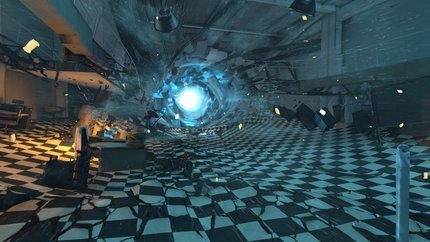 Last year at E3 2010, developer 2K Marin (BioShock 2) and publisher 2K Games showed off XCOM. It was a first person shooter revival of the X-Com sci-fi turn based strategy series set in the early1960s. X-Com loyalists were not happy with this new game with the "XCOM" name that only had superficial links with the original in that it had a team fighting off an alien invasion and had a little strategy in that players could choose what missions to take on.

Since E3 2010, 2K Marin has been pretty silent about the game's development. This week at E3 2011, we got a chance to check out a new live demo for XCOM. It's still a first person shooter but it looks like the team is revealing more tactical and RPG elements this time which makes the game a little closer to the original X-Com series. As with the last E3 demo your character is part of a secret organization that is fighting off aliens and also taking their technology to use against them (kind of like the Torchwood TV series).

The demo started with a home movie that was recorded by an unfortunate person who was caught up in an alien attack in a suburban area. Your character is watching this movie as a reference point and decides to check the area out. You can pick agents to join you, each with their own special abilities. You will be able to upgrade both your character and your teammates with better skills and abilities during the game. Once at the alien invasion site your and your agents have to take care of business as the mysterious foes do their thing. You can order your agents to move and use their special abilities (lasers, personal shield, etc). Again this is different than what we saw last year where it was more of a pure first person shooter.

Not only do you have to kill aliens but you have to take their technology. Once you are in the field you can actually use the alien tech you have obtained during the mission against them if you want. The catch? That alien tech is no longer available to take back to base to be researched. Once again there are some strategy elements around.

The demo ended with your agent apparently entering an alien portal and seeing something, well, weird. All we have to say is that XCOM, despite still being a first person shooter on the surface, definitely has more elements of the original X-Com games than E3 2010's demo. XCOM is now due out for March 2012.