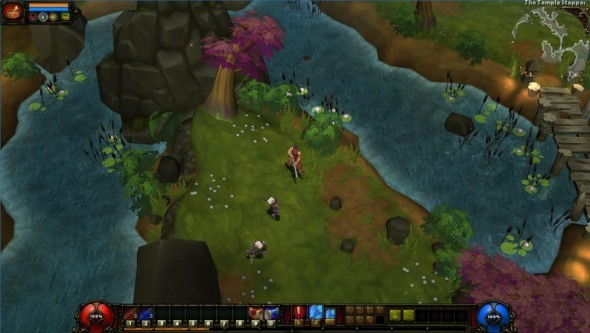 In 2009 Runic Games, made up of former Blizzard team members that worked on the Diablo series, released Torchlight to an awaiting world. This $20 downloadable fantasy action-RPG was an instant hit with PC gamers who have been waiting patiently for an addictive fantasy action-RPG. It won both critical acclaim and solid sales. A Xbox Live Arcade version of Torchlight has also been released to solid sales as well.

Now Runic Games is working on Torchlight 2, the full sequel that's due to be released later this year. We got to go hands-on with a build of the game which has will have online multiplayer co-op features for the first time. Runic Games hasn't yet decided exactly how many online players it will support but its a safe bet that at least four players will be able to play Torchlight 2 together. E3 2011 also came with the news that old school PC players will be happy with; Torchlight 2 will also support LAN play.

The game itself looks much like the original in terms of its art style. It's a bit cartoony and its fun to just look at. The game will allow players to boost up their stats, items and weapons to do as much damage as they can to the vast array of enemies. At E3 2011, the Berserker player class was revealed and shown for the first time. He (or she; you can change your character's genre) is a big one and also one that, as the name hints at, can do a lot of damage in a short period of time. The other revealed players classes are the Railman and the Outlander. Runic still has one more class that hasn't been revealed.

While our playtime with Torchlight 2 was short it was very sweet and it proved that Runic isn't interested in making a remake of the original but wanted to put in new features, especially the multiplayer, that fans of the first game wanted.