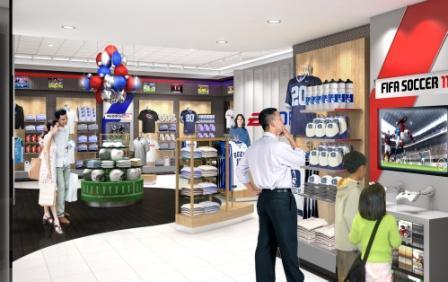 Apple has been successful in launching a series of retail stores. Sony, Microsoft and other tech companies have also eliminated the middle man by launching their own brick-and-mortar stores. Now Electronic Arts is getting into the retail stores genre. According to a story on the Forbes web site, EA Sports has already started building its first such store which will be located at the Charlotte International Airport. There's no word yet on when the store will actually open for business. The story adds that the company plans to open three such EA Sports retail stores in the next year.

Speaking about the retail stores, Chris Erb, the vice-president of Brand Marketing at EA Sports, told Forbes, "As we look to expand the overall sports game audience, it’s important for us to create environments for people to get their hands on our products and experience how much interactive sports experiences have evolved over the past few years." While the trend in selling games has moved more and more into downloading game titles and add-ons, Erb states, "As pervasive as digital is, there’s still an offline component to acquiring new customers that remains important. Our approach is to be creative and innovative with whatever we’re doing offline, and ensure that it connects with our digital strategies."

EA Sports remains the most well known sport brand for gaming although it made a controversial decision a few years ago to discontinue development of nearly all of its PC retail games due to slow sales (the exception was for its FIFA pro soccer game series; the PC version remains popular in Europe).