EE is by far the UK's largest 4G network, and its rollout continues apace. Since its launch in late 2012, the carrier has grown to encompass 72% of the UK population, keeping it on track to reach its target of 98% population coverage by the end of this year.

This week, EE has added a further 15 towns to the ever-expanding list of those covered by its 4G LTE network, bringing the total to 215 large towns and cities, and a further 2,588 small towns and villages. One of the newest additions to the list is the Merseyside town of West Kirby, in the northwest of England.

To celebrate its launch there, as well as its continued success in extending its 4G network, EE announced today that it will be offering the UK's first 4G-powered donkey rides. Visitors to West Kirby beach this Saturday, June 7, will be able to enjoy free 'superfast' donkey rides. 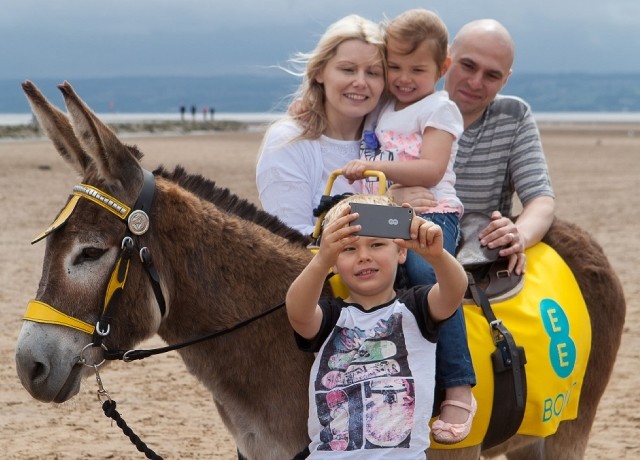 The accompanying press release for the announcement - which we had to read more than once to confirm that we hadn't gone completely nuts - states that some of Wirral's finest donkeys (named Bolt, Zip, Lightning and Flash, for those taking notes) "will be kitted out with new 'superfast' 4G WiFi technology in their saddles - turning them into WiFi hotspots for the day."

Of course, it's all in good fun - as long as EE doesn't attach rockets to the donkeys to actually make them go 'superfast' - and for those in the area, it will no doubt make for a rather nice day out (assuming the sun keeps shining!). EE's chief marketing officer, Pippa Dunn, said that "EE is bringing 4G to more regions across the UK than ever before and with summer just around the corner, we wanted to make the 'best of British' even better. It's great for everyone to be able to stay connected all the time, even in more remote spots like on the beach."

The free donkey rides - and free donkey WiFi - will be available from 12 noon on West Kirby beach, but only a first-come-first-served basis (or while donkeys last).