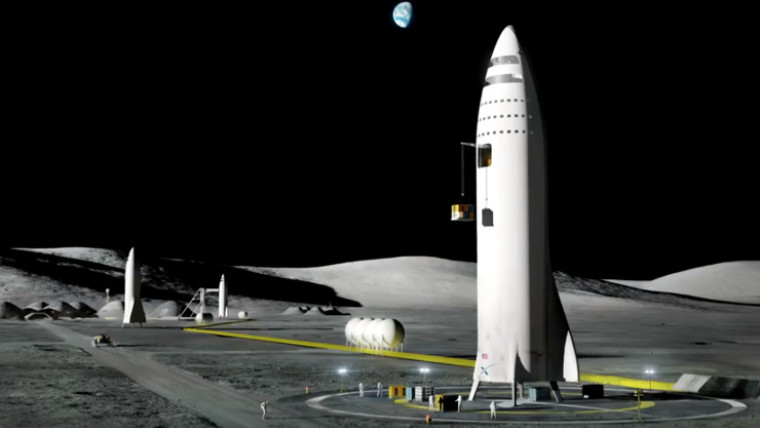 Elon Musk has just completed his talk at the 68th International Astronautical Congress in Adelaide Australia, where he has outlined, in further detail SpaceX's plans for Mars, the Moon, Earth, and making humanity a multiplanet species.

He primarily released the updated designs and details for the BFR, which stands for Big Fucking Rocket, the space system that will supersede Falcon 9, Falcon Heavy and even the Dragon system, and it will be the company's main effort in the future.

He jokingly declared that SpaceX had finally figured out how to pay for the BFR, after a number of attempts to raise funds which even included some scheme which involved collecting underpants. The BFR appears to have been made slightly smaller than the ITS that has been shown in previous designs, but Musk went into quite some depth on some of the key components that they have been working on.

Musk showed the audience the Deep Cryo Liquid Oxygen Tank, a tank that uses a carbon fiber matrix and can hold a maximum of 1200 tons of liquid oxygen. Obviously, they tested this tank until it exploded just so they knew how far they could take it, this tank will be crucial for making a light spaceship that can also carry most people's preferred element for breathing.

The Raptor engine was next, which will be the most powerful engine ever made once it is completed, SpaceX has been testing and so far has made 42 main engine tests for the booster, the longest test was for 100 seconds. Musk also outlined the engine layout that the BFR ship has once detached from the booster the specs of which are laid out below. 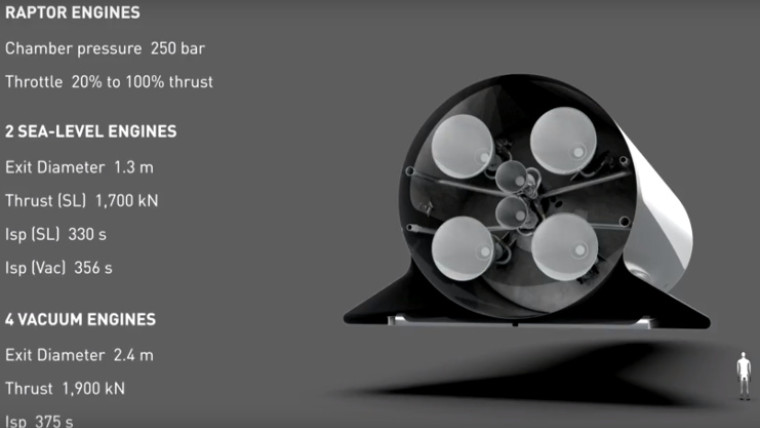 Musk made a point of stressing that there were two utterly crucial elements to the BFR and its future; the iconic propulsive landing, which appears to have been finally mastered with Falcon 9, but Musk wants this to be as safe and reliable as landing is with commercial jets. In fact, he went as far to say that he thinks that they can make the landings so precise that the ships will be able to land right onto their own launch mounts. The second important factor according to Musk is the automated refilling of ships while in space. 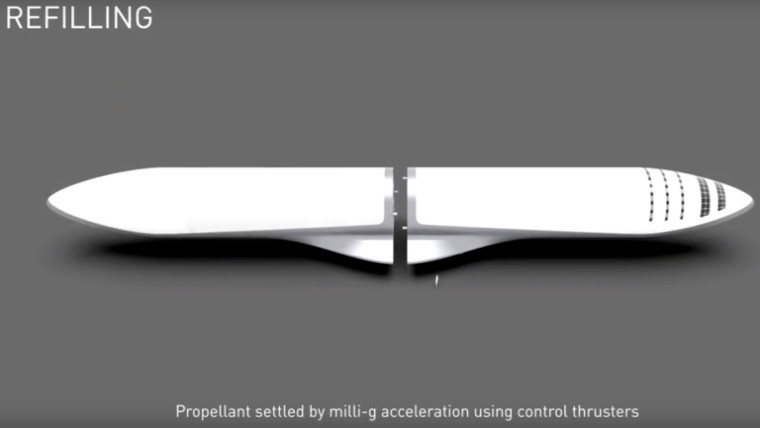 He wants the ships to be able to fill up in space via other cargo variants of the BFR making numerous shuttles back and forth delivering fuel to the BFR that is intending to go further into space. These space rendezvous, which ultimately consists of the ships slowly touching butts and docking, will be completely automated and the refueling while in space concept is what makes SpaceX's BFR ship able to have enough fuel to go all the way to Mars.

Next year SpaceX plans to make 30 orbital launches. If the company achieves this, they will be making half of all the orbital launches in the world, which emphasizes how much of a global player SpaceX has become, in an area that only large governments used to be able to operate. Later this year SpaceX will launch the Falcon Heavy but that craft pales in comparison to the BFR; the BFR is 106 meters tall and has a total payload capacity of 150 tons whereas the Falcon Heavy at 70 meters tall will only be able to carry 30 tons into lower Earth orbit.

The BFR will have more payload capability at 150 tons than even the Saturn V, which took people to the Moon in 1969, Saturn V could only carry 135 tons. Importantly though, the BFR plans to be fully reusable, which means that once the BFR has proven its reusability upon multiple relaunches ferrying fuel up to another BFR waiting to make the journey to Mars, then essentially one is only really paying for the cost of methane fuel and oxygen as opposed to a new ship everytime.

On its missions to Mars, the ship will have 40 cabins, not seats. Musk estimates the ideal configuration to be 2 people per cabin, but you could squeeze up to 5 or 6, in addition to that there will be a central storage galley, restaurant, and a solar storm shelter. The oxygen tank on the BFR ship will hold 860 tons of liquid oxygen. 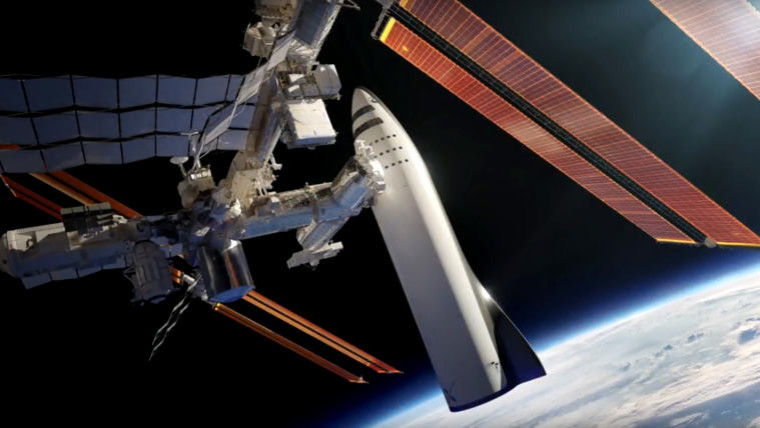 But missions to Mars is not all that SpaceX has in store for the BFR. It will offer a number of other services too, like being able to deploy satellites, collect space debris or even old satellites as well as missions to the ISS. The BFR will also be able to make Moon landings and Musk mentioned a potential Moon base called Moonbase Alpha, although details on this were a little sparse. Apart from the fact that a fully refueled BFR ship could go to the Moon and back on one single tank, with no requirement to refuel on the Moon. 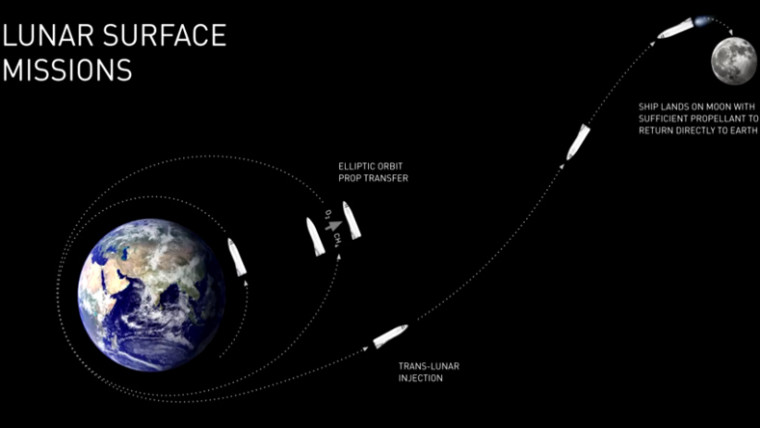 Musk then opened up on his Mars plans, for which there will need to be a fuel-making station built on Mars in order for a craft to be able to return back to Earth. According to Musk, using the Sabatier Process, this fuel-making facility will use solar power to extract CO2 from the atmosphere and combine it with water to make fuel and oxygen for the rocket. Mars will need a fuel depot but due to its low gravity, the BFR will not need a booster to take off from Mars and head back to Earth.

The SpaceX executive revealed the plan for the first cargo mission to Mars, which will be in 2022; this mission will consist of two ships that will go confirm water resources, identify hazards, place power, mining, and life support infrastructure for the future flights. The next flight will be the first manned mission to Mars, in 2024; four ships will go, two will be manned, and this trip will set up the propellant production plant and build a base for future expansion. 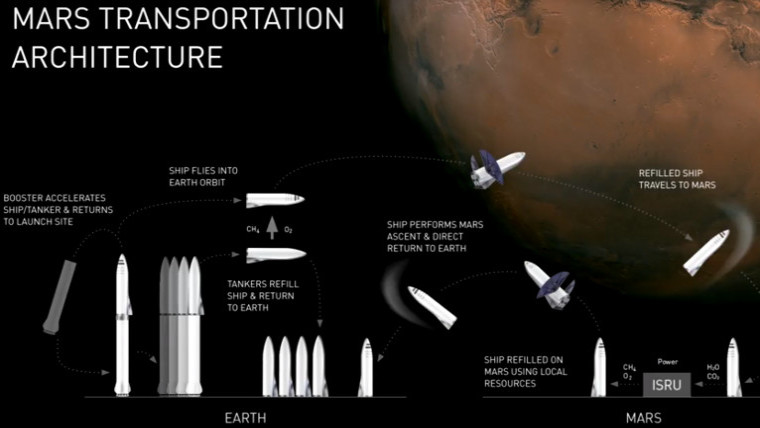 Once these landings are made, over time the plan is to make an ever-expanding Mars base which will eventually come to look more like a city. On Mars, dawn and dusk are blue and the sky is red in the day, the opposite of Earth, but Musk also revealed something completely new, the usage of the spacecraft for travel around Earth itself.

Applying the same craft to the task, Musk showed a video of people boarding from New York and making a flight to Shanghai, a journey for which the new craft would only take 39 minutes. The BFR in this instance would travel up to speeds of 27,000 km/h, and land in the same fashion as a Mars landing, with the booster detaching and landing itself, with the BFR controlling its landing via thrust as normal.

This revolutionary idea would cut most long distance trips down to less than 30 minutes, and passengers could go anywhere in the world in less than an hour. Primarily because the system will have no friction, no turbulence, and, well, be powered by rocket engines.

The long and fairly detailed presentation from Musk will undoubtedly have experts talking for some time and will open a whole range of new questions, but it will also have certainly inspired some observers with the very near future where humanity becomes a multiplanet species.