Apps on Facebook are a pretty big thing. By the time you've read this article, you'll probably have a couple more requests to join someone in FarmVille, or whatever other game is popular at the moment.

Application developers are furious with Facebook, according to The Guardian's Josh Halliday, as it was discovered the site isn't too bothered about checking applications. Apps entered into the 'verified apps' system are charged up to $95,000. For this they are investigated and ensured to be safe enough, and then there's a green tick applied to the app. This is meant to tell Facebook users that the app's a good 'un. 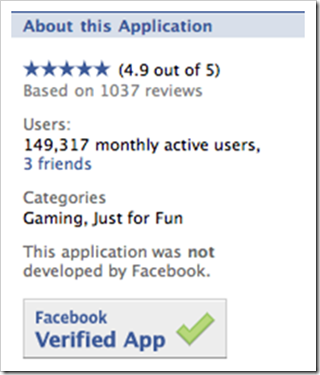 The scheme has since been closed, and the Federal Trade Commission (FTC) are looking into it. They revealed that Facebook took no steps to review the apps. According to the social network, apps would be subjected to a 'detailed review process', to ensure the apps were 'secure, respectful, and transparent'. If only the social network was as transparent when it made these lofty claims.

The FTC are looking into this, and it's part of a 19-page document detailing charges against the social network. The FTC document is available online, if you'd like to read all their charges. The verified apps system has been gone for a very long time now, but all these charges are only boiling to the surface. Facebook closed the scheme in 2009, and as you can see, it's still appearing as a thorn in their side.

An excerpt from the first page of the FTC's document against Facebook. There are more points raised throughout, but this breach of the FTC Act is what's getting the federal attention.

Another ruling came on Friday, at the same time as Google was fined a record-setting figure over Apple's Safari web browser. Facebook's Friday came to a settlement where an independent watchdog will be allowed to make regular 'privacy inspections' of the service for the next twenty years. Friday wasn't a great day for Facebook. We have a feeling Facebook isn't going to 'Like' the situation with the FTC much either.