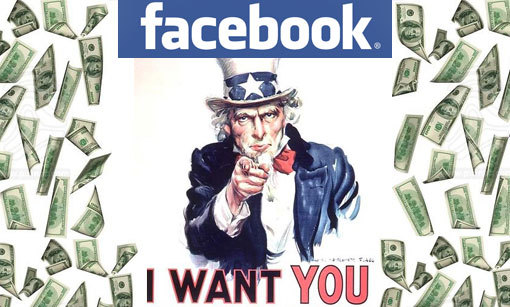 Documents provided to Goldman Sachs clients have revealed Facebook made $355 million US in profit in the first nine months of last year.

Reuters reports that the investments and securities firm began hand-delivering copies of a 101-page private placement memorandum for its Facebook offering to select clients around lunchtime Thursday in New York. Clients also reportedly received a six-page statement providing the clearest picture yet of Facebook's financial situation.

One such client, who declined to be named citing a Non-Disclosure Agreement, said the financial statement showed Facebook had $1.2 billion US in revenue in the first nine months of 2010. How the social networking company generated its revenue was not detailed. Ryan Jacob of the Jacob Internet Fund told Reuters that Facebook most likely made around $500 million US in profit in the whole of last year.

Reuters columnist Robert Cyran added that the same documents apparently state that Facebook had almost $800 million US in revenue and profit of $200 million US in 2009, which if true gives a strong sign of just how fast the company is growing. Two days ago, Neowin reported that the site had reached 600 million active users and could hit the one billion mark in late 2012.

Investors are reportedly eager to snap up Facebook stock via Goldman Sachs, which is investing $450 million US of its own capital in the company. Goldman is aiming to raise at least $1.5 billion US from its wealthy customers through a limited-time offering.

The Goldman Sachs financial statement also reportedly predicted that Facebook is likely to have more than 500 shareholders this year, which would trigger a Securities and Exchange Commission rule requiring the company to begin filing public financial reports. Based on that information, analysts have pegged a long-awaited Facebook IPO at April 2012.