Yet another file sharing website is to close its doors permanently on Tuesday, March 31st 2015. At this point it's unclear if this is a business decision, or if the closure was prompted due to legal reasons.

File sharing sites have seemingly fallen one after the other in the past two or three years, with MegaUpload being one of the high profile websites closed due in part to intervention by the United States and, allegedly, lawyers representing movie studios or the record industry having a say in the matter.

Rapidshare shrugged off the closure of MegaUpload at the time when asked if it too was worried about being raided or closed down, saying:

RapidShare AG was founded in Switzerland and in fact, it was always located at the address given in the company details and was always run under real names without any anonymous intermediate businesses. The radical measures against Megaupload were apparently required since the situation there had been totally different. 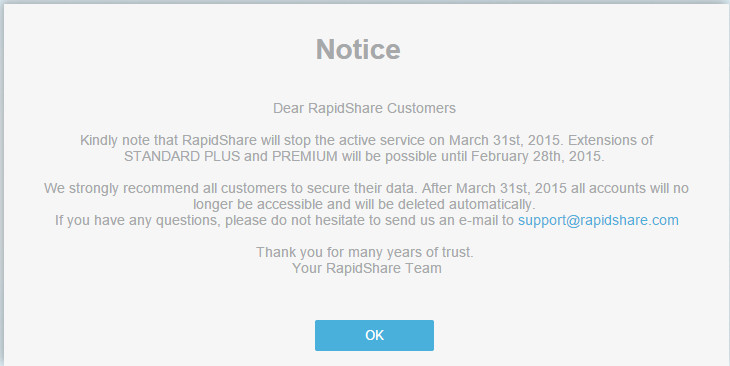 However, today the Rapidshare website currently shows the above message, which also invites users to email for further information. Users have also been warned that if they do not backup their data before March 31, they will permanently lose their data.

We have sent an email asking why they are closing down, and will update this article if and when we hear back.