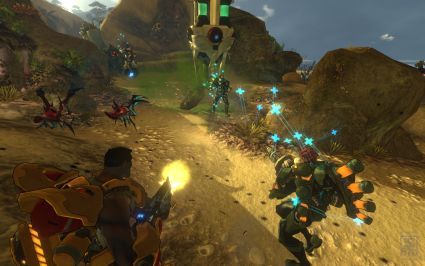 Red 5 Studios, the development team behind the upcoming free-to-play sci-fi shooter Firefall, has filed a lawsuit against the game's Asian publisher Webzen. According to a message board post on Firefall's forums by Red 5 Studios' co-founder Mark Kern the issue is that Webzen has had a change in management after it entered into a publishing agreement with the company. Kern states, "Unfortunately, we do not feel the new management of Webzen has honored their obligations towards Firefall, particularly in Asia." He adds, "We intend to stand up to Webzen, a large Korean publisher, and show them we expect developers to be treated fairly."

The developer is currently looking to terminate its publishing agreement for Firefall with Webzen in Asia as well as claiming $5 million dollars back from Webzen for Firefall's marketing purposes. Red 5 Studios will still publish the game in the US and Europe. However the MMORPG.com web site has received a response from Webzen, claiming that it has invested a whopping $25 million into the development of the game. Webzen's statement said, " ... we are dismayed that Red 5 has initiated this dispute before we are able to enjoy the results of our investment."

Red 5 Studios was formed back in 2005 but kept development of its game secret for many of those years. In early 2010, the company announced a restructuring as well as an acquisition by China-based publisher The9. Firefall was finally announced in September 2010 and is currently scheduled for launch by the end of 2011.