Stuck for ideas on where to take your next vacation? If you’re into gaming, UK retailer GAME could have just what you’re looking for.

GAME has teamed up with STA Travel, one of the world’s leading travel specialists for students and young people, to offer what it describes as “the ultimate gaming adventure”. The four-week trip takes in three continents, eight countries and a total of thirteen destinations, each with a different gaming story to tell. 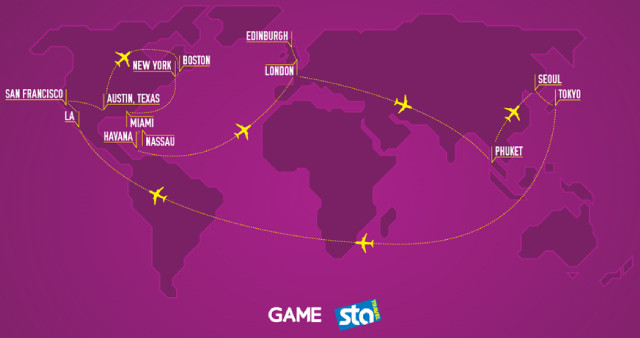 The journey begins in Edinburgh, Scotland – home of Grand Theft Auto developers, Rockstar North – before you’ll head down to London. From there, it’s on to Asia, including a visit to the Tokyo headquarters of gaming legends Konami, and then to the United States, with destinations such as LA, San Francisco and New York City on your itinerary.

The last U.S. stop is in Miami, and then you’ll journey to the Bahamian capital, Nassau, which featured in Assassin’s Creed 4: Black Flag. After that, it’s on to Havana, Cuba – which appeared in Call Of Duty: Black Ops and Command & Conquer: Red Alert 3 – before returning to London for a final night of themed debauchery at the Gamer Disco.

If all this sounds like nirvana for your inner gamer, you’ll need some deep pockets to make it happen. Prices for the full gaming odyssey start at £5,582 GBP ($8,950 USD / €6,700 EUR), which includes flights, but only two nights of hotel stays.

Incidentally, if anyone is looking for a companion for this trip, I can do January. As long as you’re paying.